After a good night’s sleep, I got up early on my first full day on Rapa Nui, determined to check out Orongo, the ceremonial center of the bird man cult and one of the major attractions of the island. As is my style, I intended to do most of the trip independently, and on foot, incorporating as much hiking as possible into my day.

I headed out of town early, though early on Rapa Nui means about 9:30; the sun doesn’t rise until about 7 and doesn’t set until after 9PM! I walked out of town, seeing few others on foot, but eventually catching up to other travelers. My first stop was into a little cove where you can find rock art in a cave named Ana Kai Tangata. The cave is covered in images representing the bird man.  The location itself is spectacular; blue water and skies. 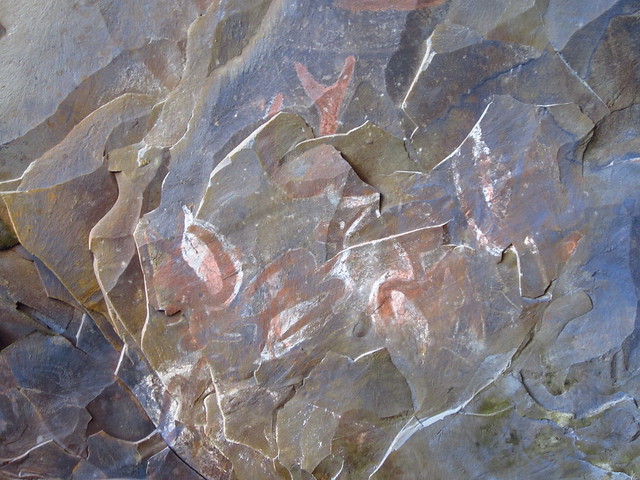 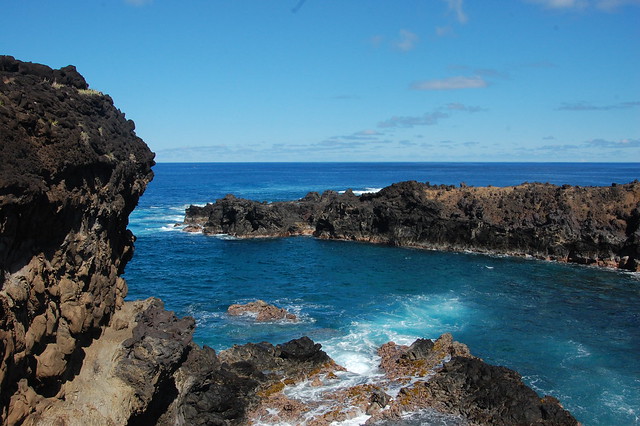 After climbing out of the cove, I walked along the coast to better appreciate the clear blue of the sea, the green hills around me, and the amazing feeling of the strong sunshine on my back. 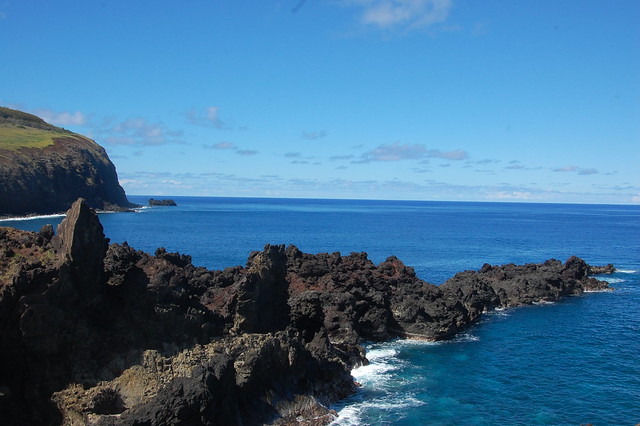 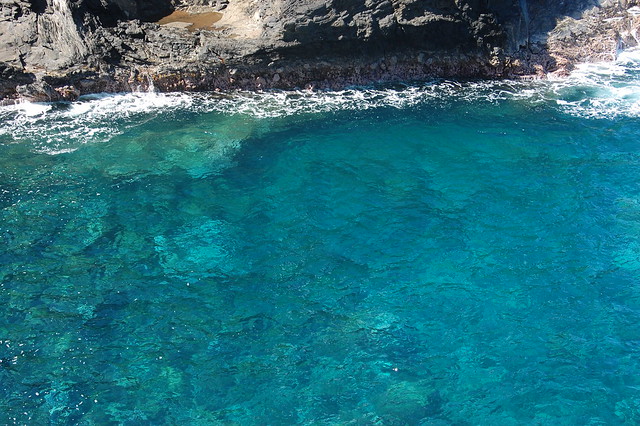 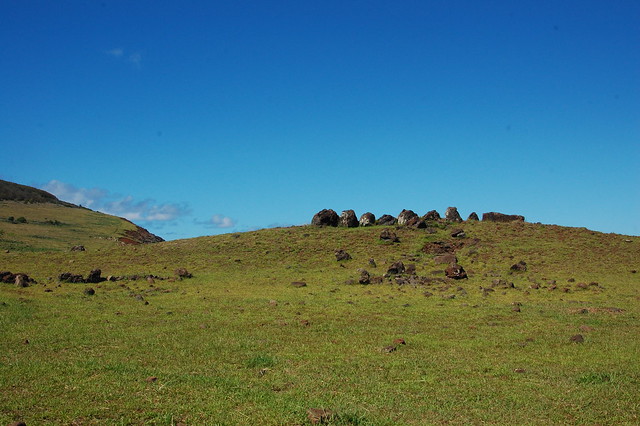 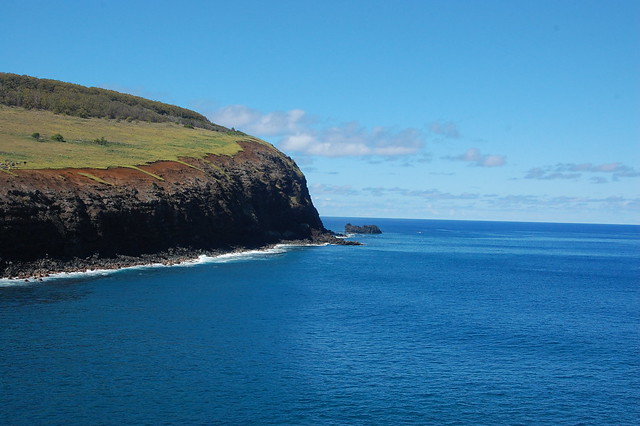 Views from the coast

And then I began my ascent up the hill leading towards Orongo.  The hike is only an hour or two long, but this is in relentless sun and warm weather, so it feels pretty strenuous.  But it’s an enjoyable route, and the views from the top are absolutely amazing.

As I approached the edge of Rano Kau, I had no idea what to expect, but what I saw took my breath away.  I had never seen anything like this; a deep crater filled with water reflecting the sky and vegetation adding splashes of green, brown, and yellow.  A crumbled wall revealed the incredible blue ocean once again.  It was astounding, and I could have stood admiring that crater all day.  At the same time, the panoramic views back towards Hanga Roa and over the rest of the island were nearly as impressive! 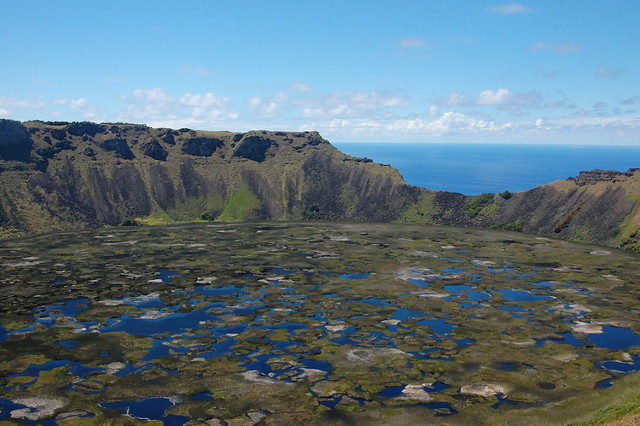 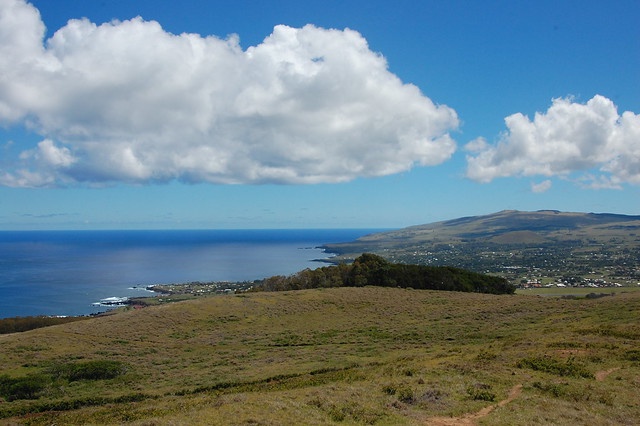 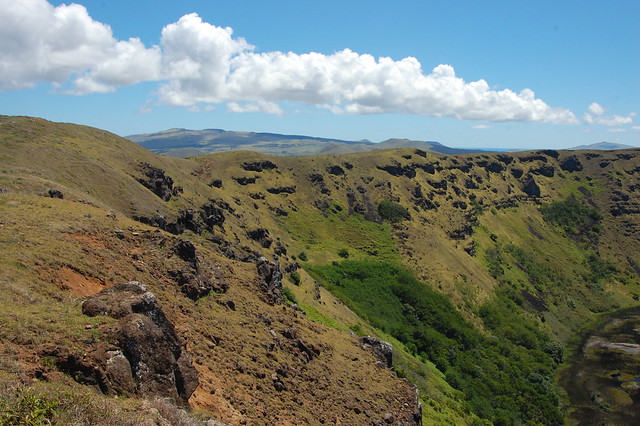 Rano Kau and its panoramic views

From Rano Kau, I continued the short journey onwards to Orongo.  At Orongo I took a minute to cool off and read the displays about the history of Orongo and its birdman cult. (If you’re interested in learning more, this blog has a good summary as well as nice pictures!)  The islands in the pictures below are where competitors swam to collect and bring back the egg of a bird for their chiefs.  You can also see the ceremonial village and living structures, below. 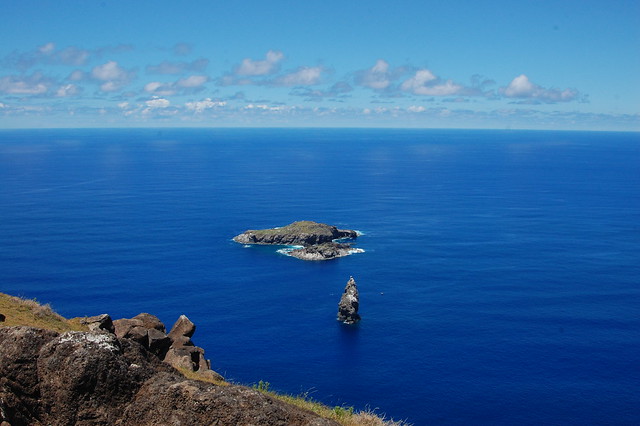 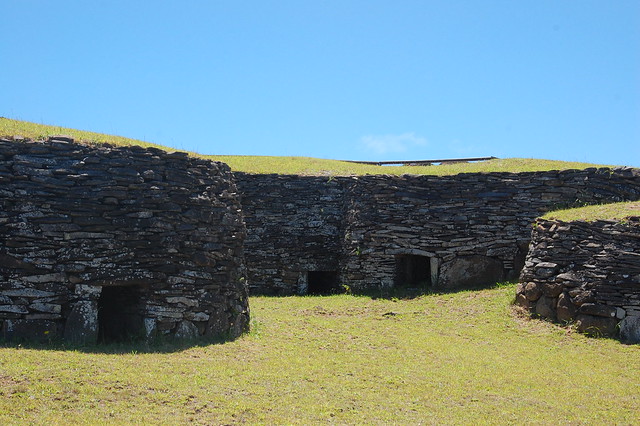 But for me, the most beautiful part of Orongo was the views. 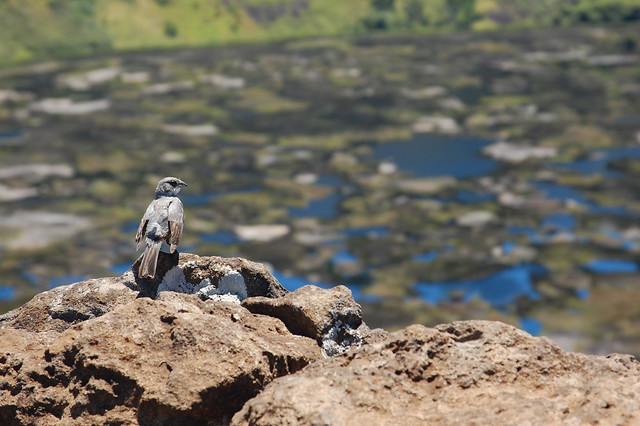 There is some well preserved rock art at Orongo, honoring make make, the god of the birdman cult, but unfortunately it was off-limits to visitors when I was there. This photo got closer than I did! Instead, I appreciated the birds that were around the area; there are only about five species on the island. 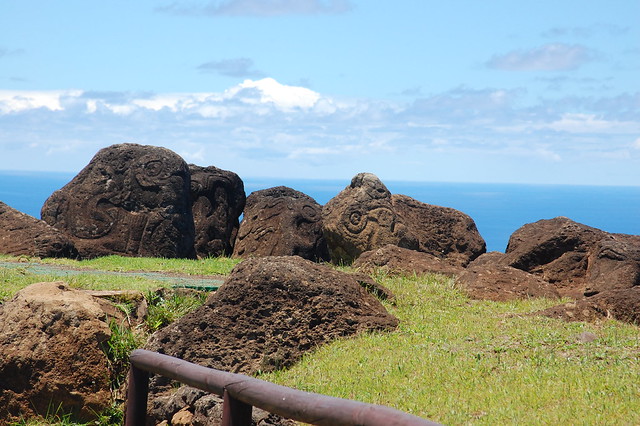 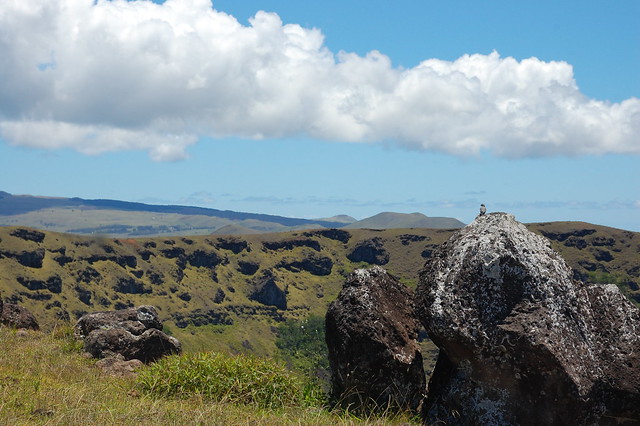 Views above the crater

After leaving Orongo, I headed back to Rano Kau to enjoy the views of the crater once again, and then headed down the hill. On the way down, I ran into my new friend, who was on his way up, and we made plans to meet up again that night.

I headed back into Hanga Roa and wandered over to Ahu Riata, where there is a lone moai near a busy road on the outskirts of town. From there, I walked back to my residencial, passing a yoga studio, which I unfortunately did not get the chance to check out on my trip. After giving myself a brief rest to recuperate from the day’s walking, I headed back to Mikafe for some more gelato.

And then it was time to see Kari Kari, the folkloric cultural ballet performed in Rapa Nui by dancers in amazing physical condition.  You might think that a performance of traditional dance for tourists could be overdone, but instead it was incredibly beautiful and really made me appreciate the music.  The dancers never stopped smiling, the story was told through their movement, and the joy of their performance was palpable.  I loved it so much I almost went back another time. 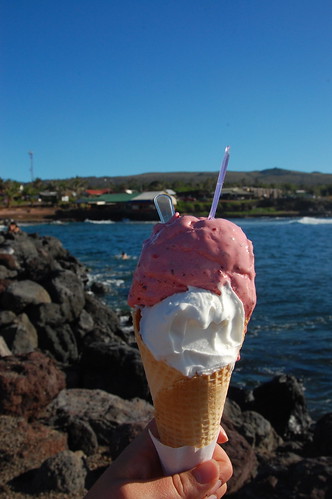 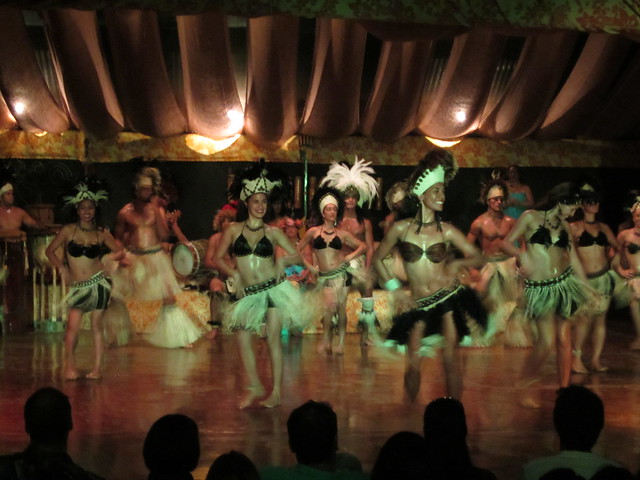 From there, we headed off in the night in search of dinner and drinks, finding a restaurant with unusual, but delicious pizza, and a bar with some well-crafted, fruity cocktails.  It was the best way to end a truly amazing, joyful day on Rapa Nui. 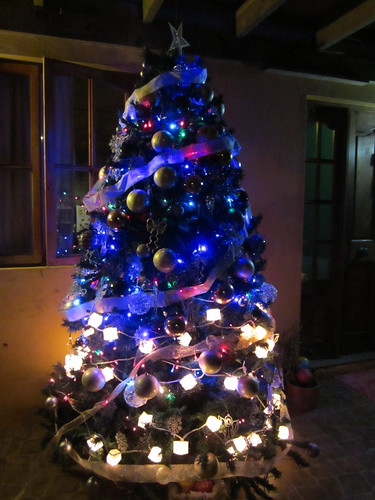 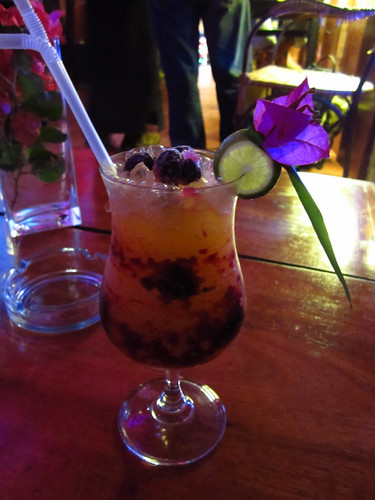