On my third day on Rapa Nui, I was ready to continue exploring the island on foot.  At this point, my feet were still in pretty good shape, so I set out towards Vinapu, picking up some empanadas for the road.

As it turns out, the walk to Vinapu is a lot longer — and dustier — than I expected it to be. I got about halfway there before a pickup truck pulled up next to me and its driver offered me a ride, a classic example of the Rapa Nui hospitality.  Rapa Nui is so safe that it is more than okay to hitchhike and accept rides.  The generous driver worked for the power station which was right by Vinapu, and saved me quite some time in the hot, persistent sun. 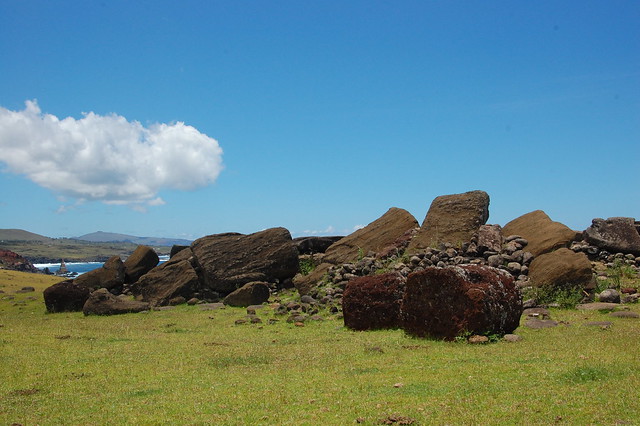 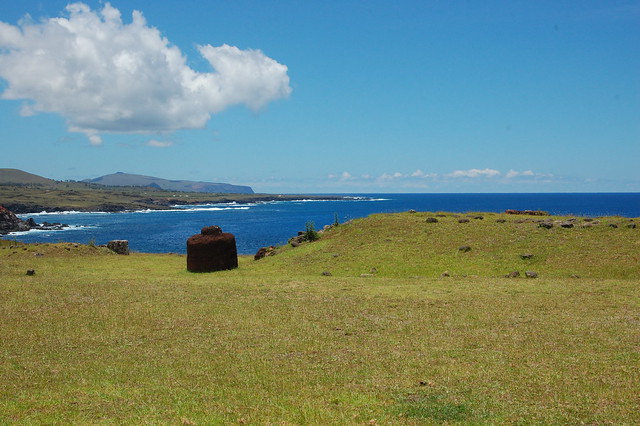 Arriving at Vinapu, I quickly saw that I was the only one there, though there were people closer to the water’s edge, picnicking or biking.  Stunned and appreciative of my surroundings, I approached the first ahu I’d seen with fallen moai.  Seeing these gorgeous statues tumbled to the ground with their pukao (topknots) scattered nearby was incredibly moving.  I sat near the ahu with my simple lunch of fruit and an empanada, taking in the scenery. 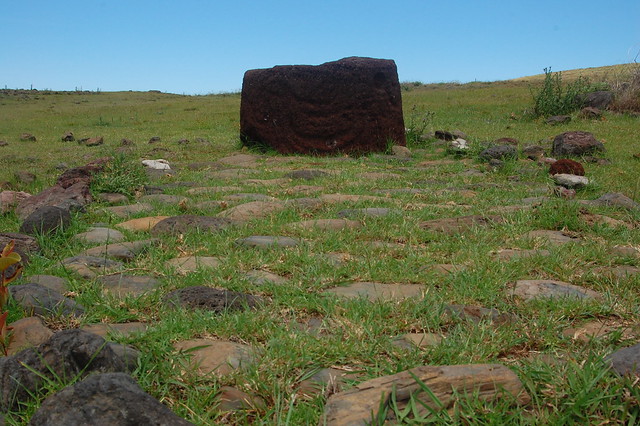 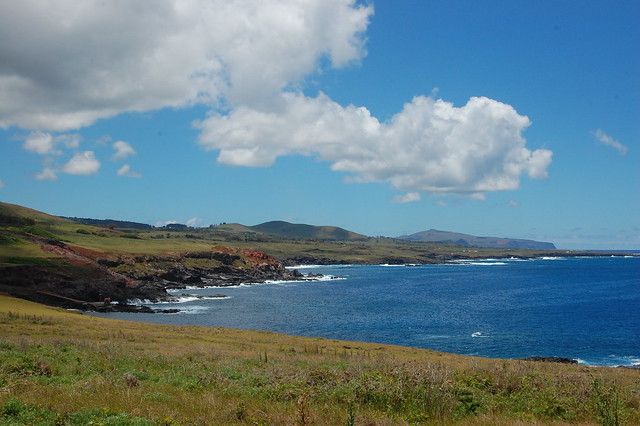 From there, I continued to walk around the site.  I approached different pukao, took in the gorgeous southern coast with the incredibly blue sea, and came around to the other side, where I saw more fallen moai and the impressive and unique stonework of the ahu. 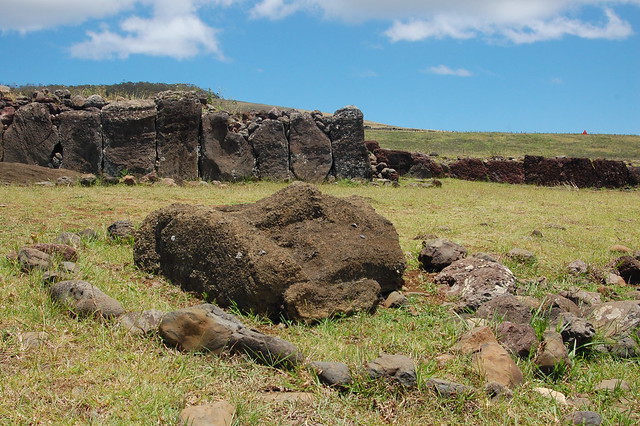 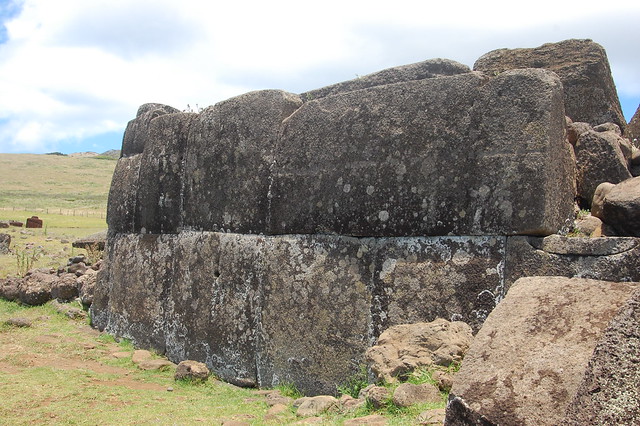 The stonework at Vinapu is supposed to be particularly interesting because of the resemblance it bears to Incan stonework.  People, like me, who visit from Peru are especially encouraged to check it out for that reason! 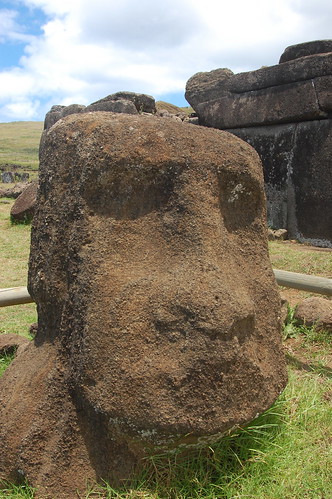 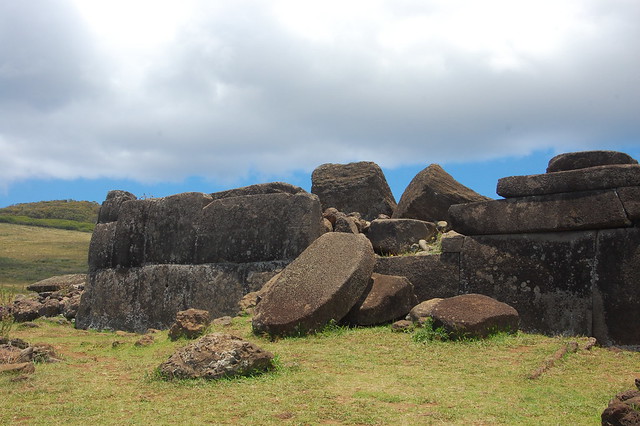 It’s interesting to inspect the moais‘ heads up close, and wonder about how they got there, which ancestor they represented, and why they ended up being toppled over.  There are lots of theories, and each seems rather heartbreaking.

From Vinapu, I headed back down the dirt road towards the main road.  Soon after I passed the power station, another man passed by to offer me a ride to the main road, saying that I had a long way to cover on foot.  After talking about my plans to walk to the next closest site on the south coast, he suggested that I head to Puna Pao instead, and generously went out of his way to take me to the intersection of the road leading up towards it. 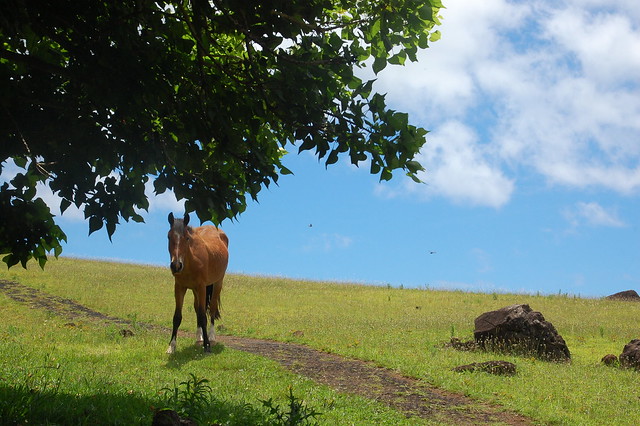 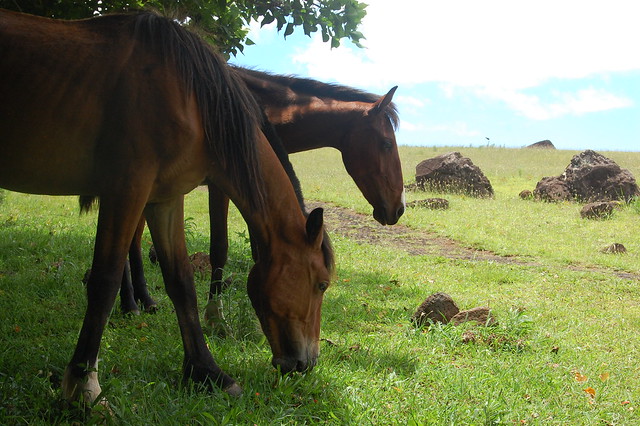 When I arrived to Puna Pao, I found myself alone — well, with the exception of a few horses grazing nearby. I sat under a tree for a little while and ate another snack, appreciating the brief moments out of the sun. 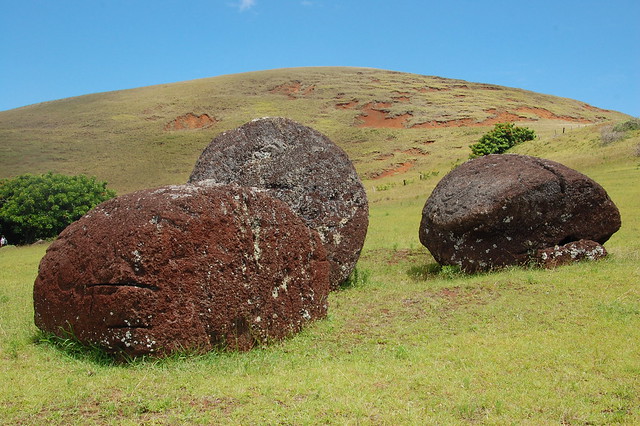 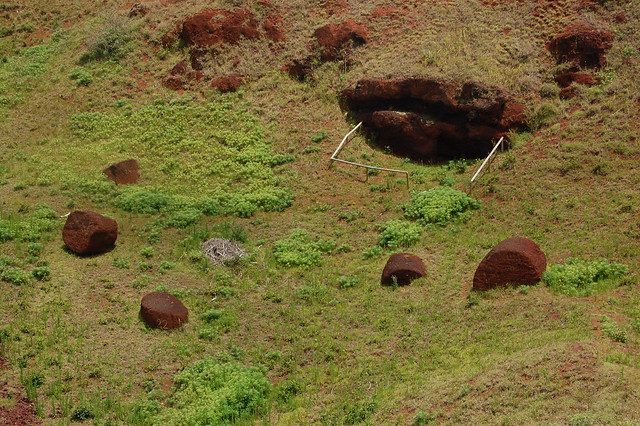 Then I headed up the hill to look out over the rocks spotting the landscape.  The pukao, or topknots, were carved out of this stone; Puna Pao is known for being the quarry where the pukao were born.  You can see the quarry and scattered, abandoned pukao in the picture on the right. 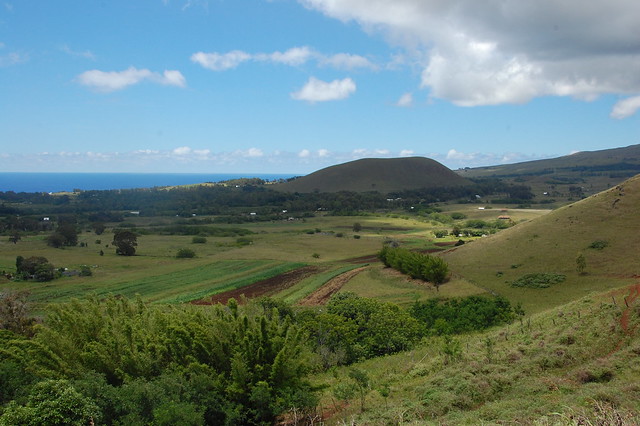 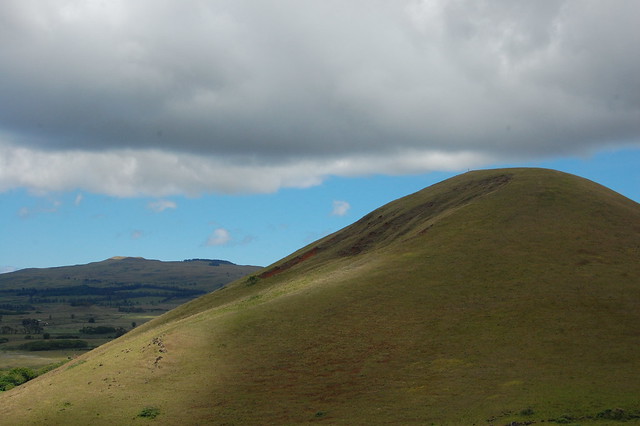 When you reach the top of the hill, there is yet another wonderful panoramic view of Rapa Nui, including Hanga Roa and the nearby hills.  The greenery of the local farmlands is lovely, as are the views of the town as you look out towards the sea. 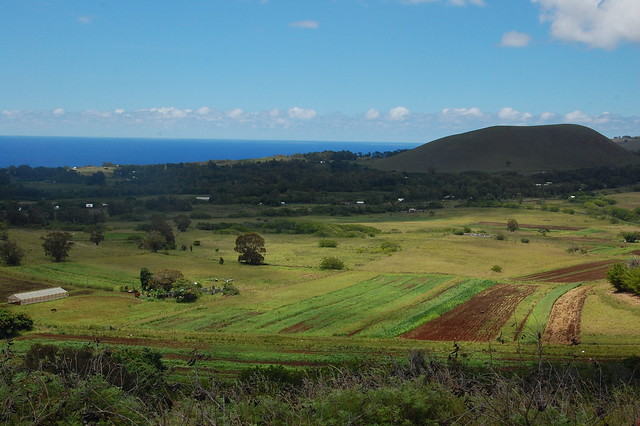 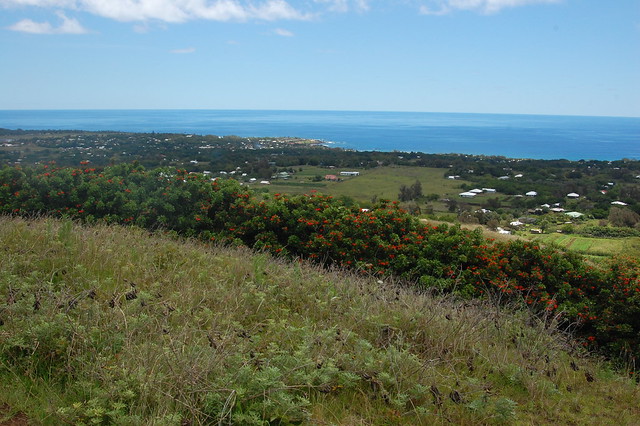 As I headed back down the hill, a few tour buses pulled up, and I knew it was time to head on my way.  I walked back to the main road, and as I was walking around it, beginning the long journey back to Hanga Roa, I saw a car pass, turn around, and then head back towards me.  Two women pulled up alongside me and asked me if I needed a ride; they were Chileans visiting from the mainland, and had spotted me walking and turned around just to pick me up!  So kind.  We had a nice chat as they drove into town to mail some postcards, and they dropped me off at my hostel.

At this point in the day, I was covered in dust and needed a break, so I decided to hop in the shower and relax for a bit before heading out to take in more of the island.  I’m sure I stopped for ice cream that day too. 🙂 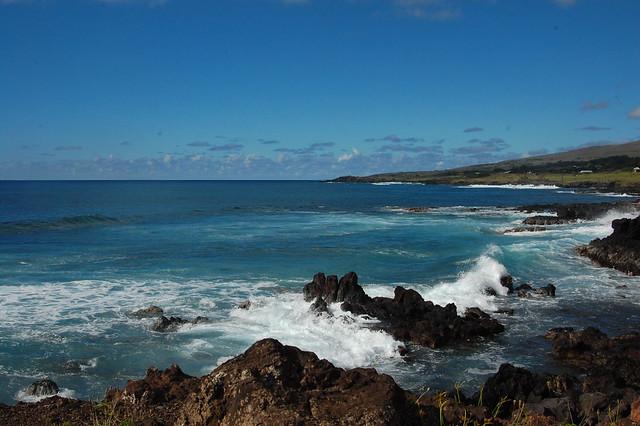 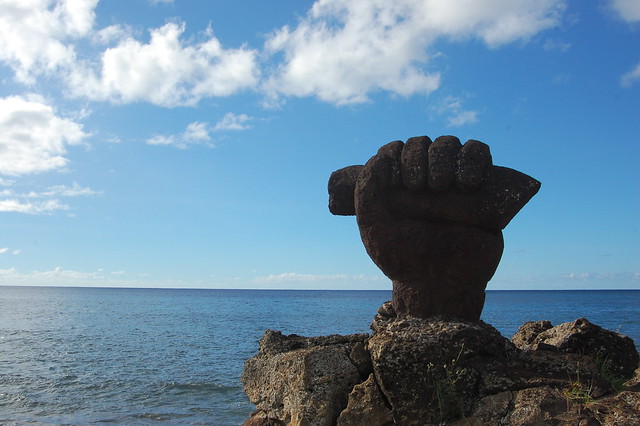 Walking along the north coast outside of Hanga Roa never failed to amaze with the beauty of the water. I also appreciate the art inspired by the style of the moai, such as this one! 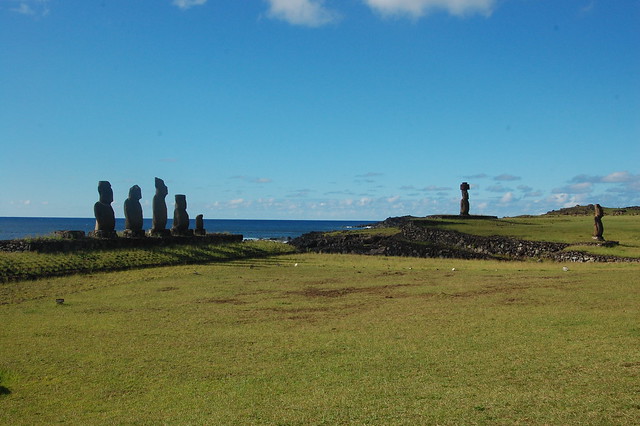 Since it was earlier in the day, Ahu Tahai was nearly abandoned, and I got to appreciate the statues in a less hectic setting.  From there, I continued walking up the coast until I reached Hanga Kioe and two more moai, one just a stub after years of decay. 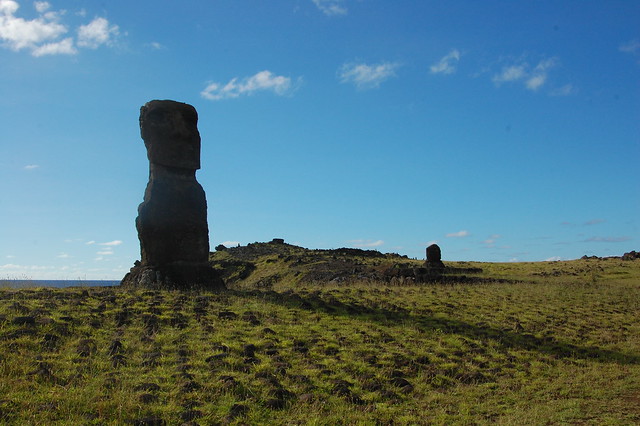 On the way back, the views from Ahu Tahai were astounding. This photo with the late afternoon sun hitting the rocks with atmospheric clouds is one of my favorites from the trip. 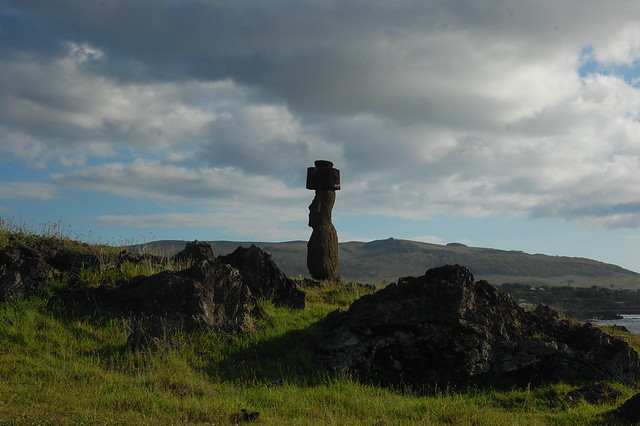 I headed back into town to meet up with my travel buddy for dinner.  Since the sun sets so late on Rapa Nui, we were able to catch the end of yet another gorgeous sunset from the pier. 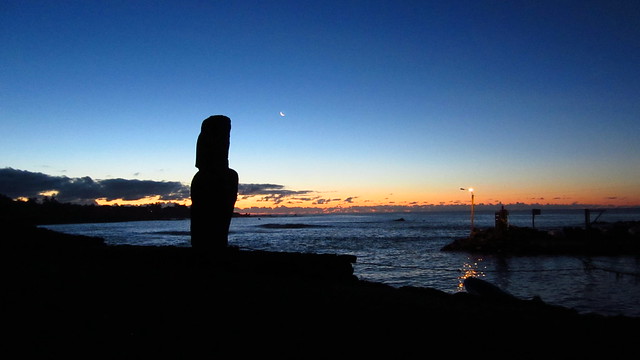 This was a much calmer, quiet night of yet more empanadas and wine, since we had a very early morning planned: covering the north coast on horseback!