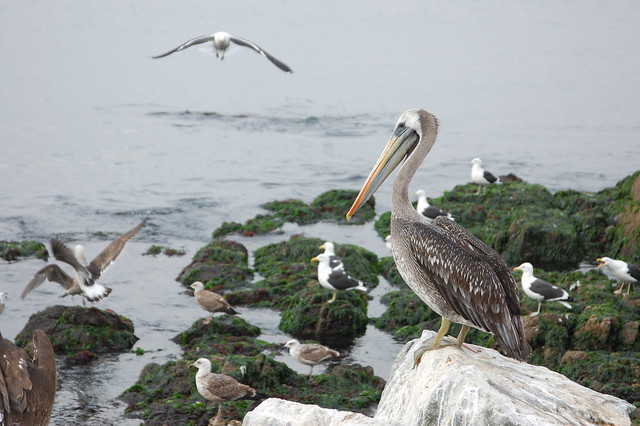 Pelicans and Other Seabirds in Caldera, Chile

There’s no way around it: northern Chile is vast. Chile is a long, skinny country with miles upon endless miles of coastline, dotted here and there with important port cities or crossroads towns connecting to an inland highway. When heading north from Santiago by land, you may ask yourself one of two questions: can I endure spending 24+ hours on a bus? or, where can I stop? 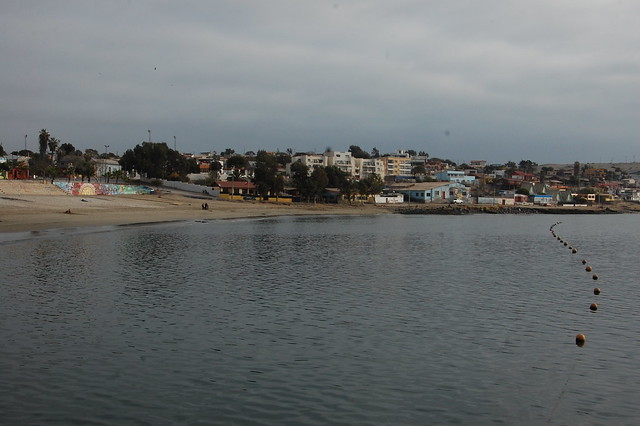 While I spent 32 hours on a bus once before, I vowed never to do that again. When I decided to visit Iquique for the second half of my winter vacation, I knew I wanted to break the journey somewhere along the way. 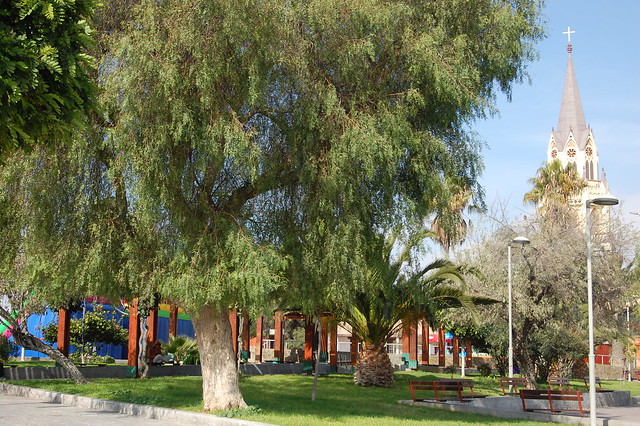 Enter Caldera. Caldera is about 12 hours north of Santiago and 12 hours south of Iquique and located right off the Panamerican highway, making it an easily accessible and convenient stop on a bus journey along the coast. After hearing rave reviews of the town from two of my volunteers, I decided to see it for myself. 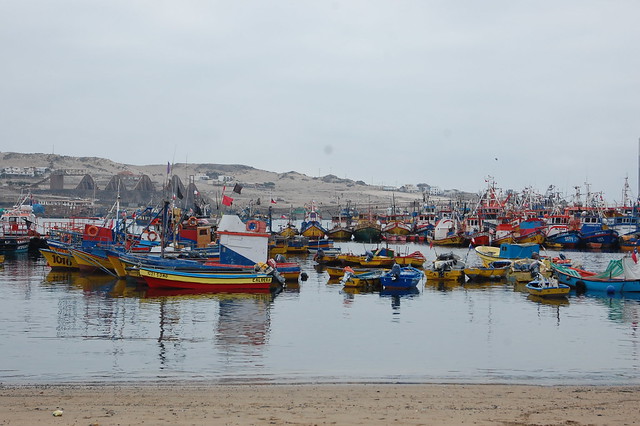 Caldera is a town known for its artisanal fishing methods, for being the site of the first railroad in Chile, for its colonial arquitecture, and for its pleasant beaches. By coincidence, I decided to visit Caldera on the weekend it was celebrating the anniversary of the first railroad, which gave the usually quiet town lots of fun energy and life. 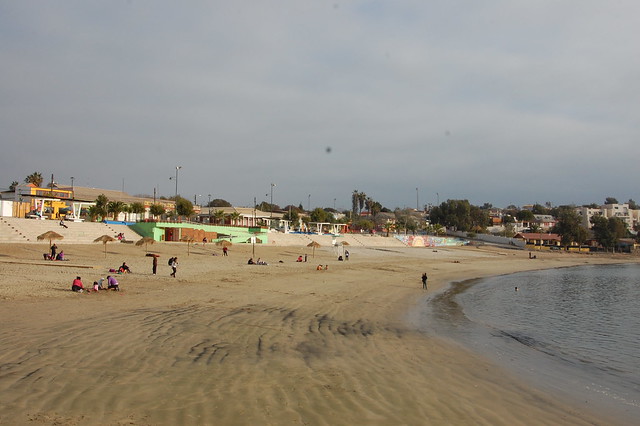 Relaxing at the Beach in Caldera, Chile

To be fair, there isn’t much to do in Caldera except relax. I spent some time sitting by the ocean, looking out at the fishing boats docked in the bay. I took in the colorful plaza, which on one side is your typical Plaza de Armas, and on the other is a mini amusement park. I wandered the streets looking at the colonial buildings. And of course, I ate artesanal ice cream from a local shop. 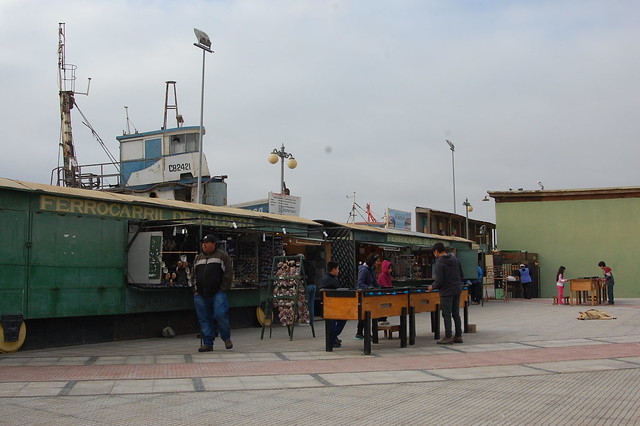 I poked around the old railroad station, which is now a Centro Cultural. Because of the anniversary weekend, there were a lot of food stands selling regional treats like my much-loved churrasca. 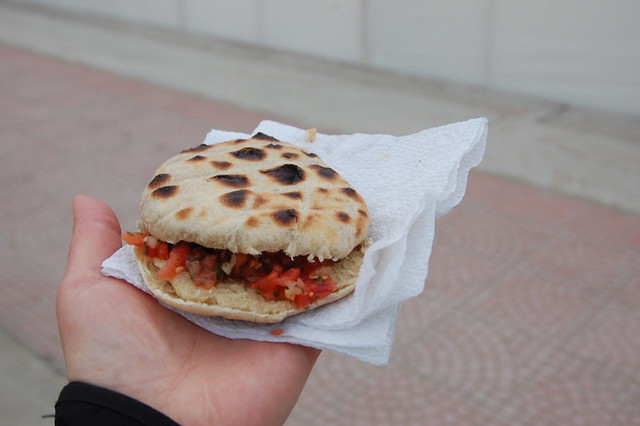 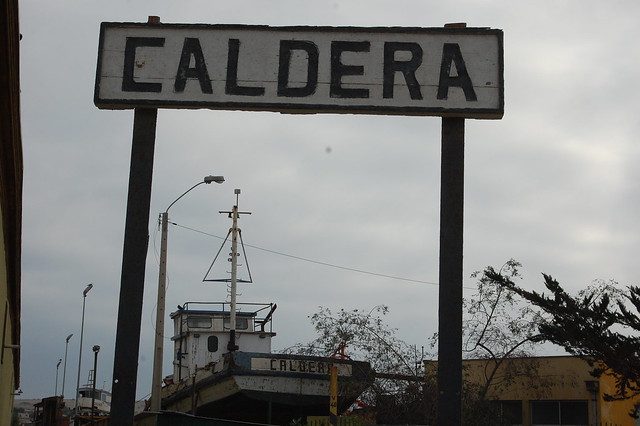 After getting a sense of the town, I wandered over to the fishing docks and watched the pelicans, my favorite seabird. I also watched the sea lions lumbering around on the rocks, going about their business. 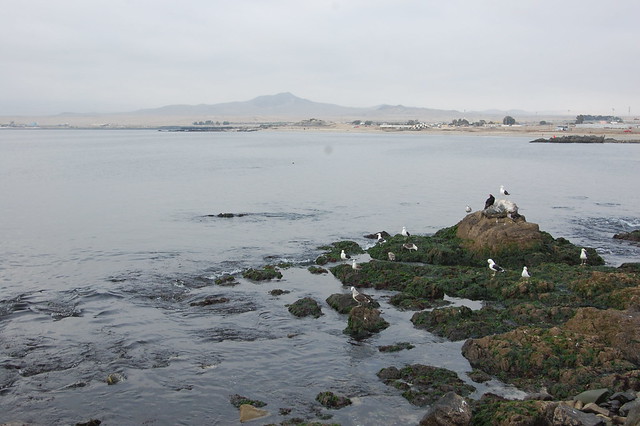 Watching the Seabirds Along the Coastal Desert in Caldera, Chile 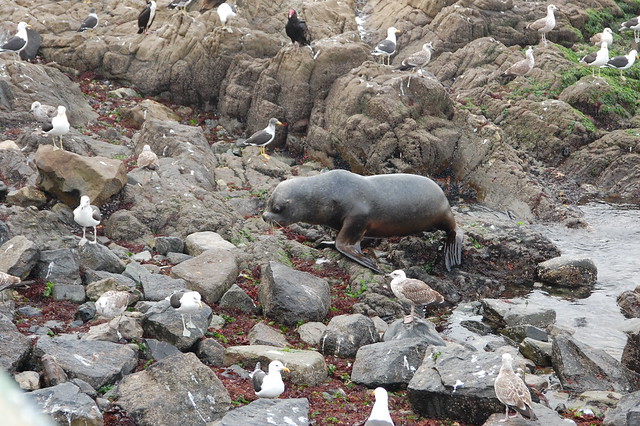 As a vegetarian, I wasn’t tempted by the seafood restaurants or museum on fishing methods, but I did appreciate the murals celebrating traditional fisherman, who also form part of my own family tree, many generations back. 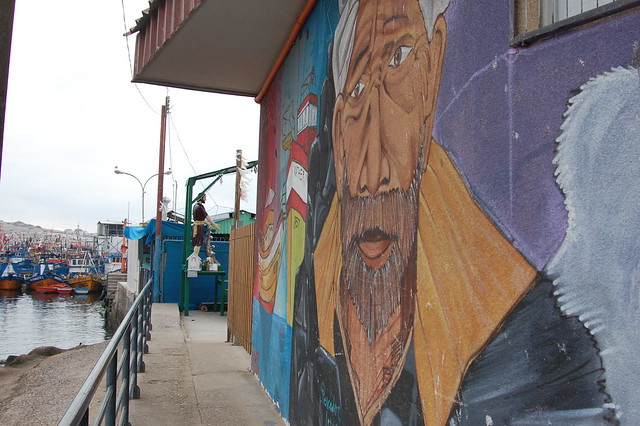 The next morning, the hostal lent me a bike and I headed back into town to watch the main ceremony recreating the first departure of Chile’s first railroad. 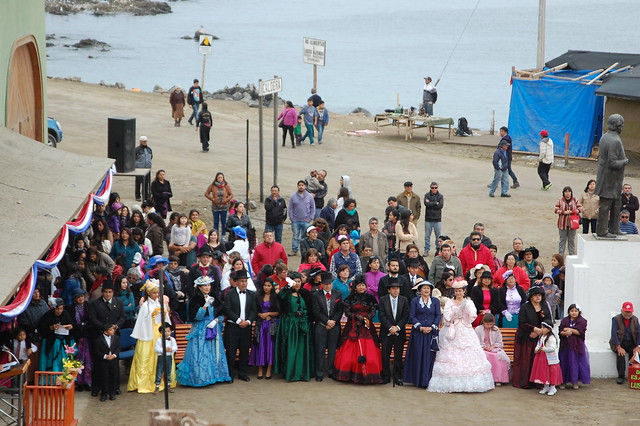 I appreciated that so many of Caldera’s residents went all out in wearing traditional clothing from the 1800’s. It was nice to see a celebration that was not religious, but rather historical, in nature. After welcoming trekkers who hiked overnight to arrive in Caldera, it was time to cut the ribbon and board the train. 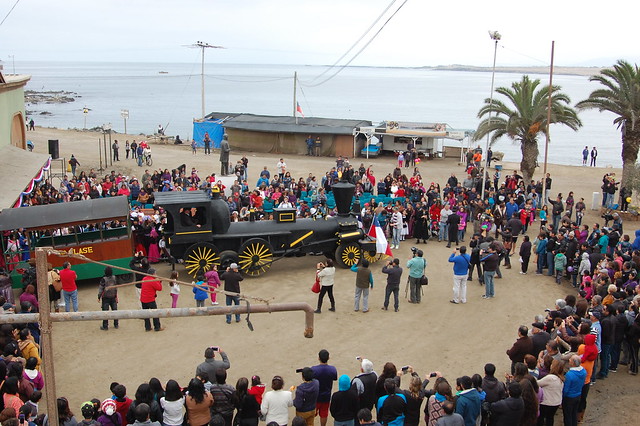 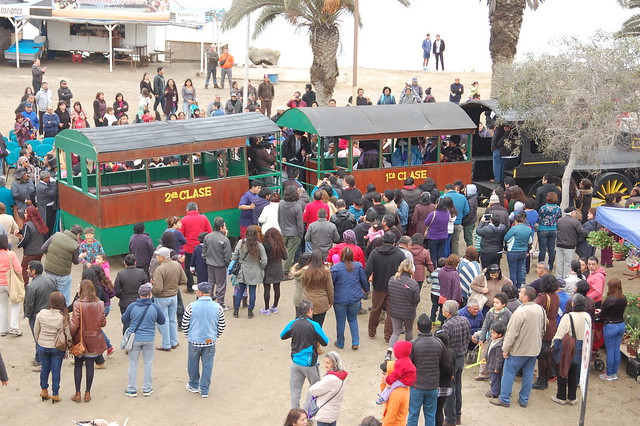 Time to Get on the Train in Caldera, Chile

From the center of town, I biked over to the other major destination in Caldera, the Gruta del Padre Negro, a small church sanctuary honoring a priest from Colombia who is known for granting miracles. 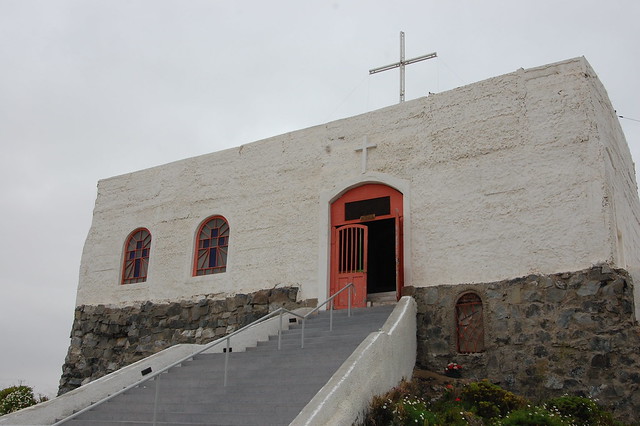 The small building has colorful murals painted all over its interior and the inviting plaza is also a good place to break for a snack. 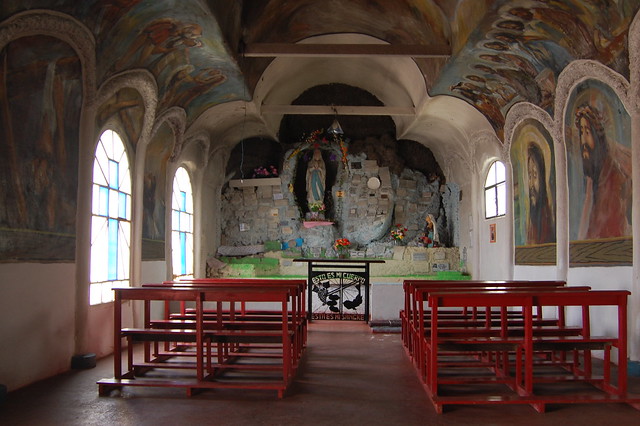 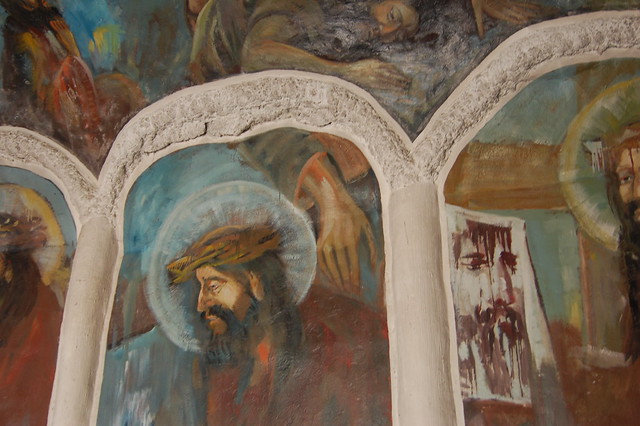 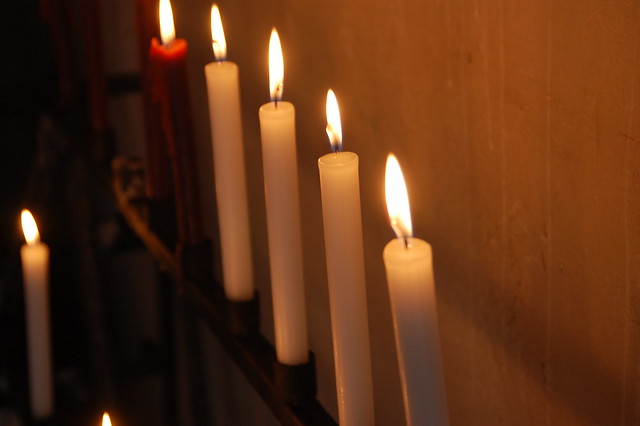 I continued along my way the 6km bike path to Bahía Inglesa, a popular tourist destination due to its white sand beaches and jewel-toned waters. 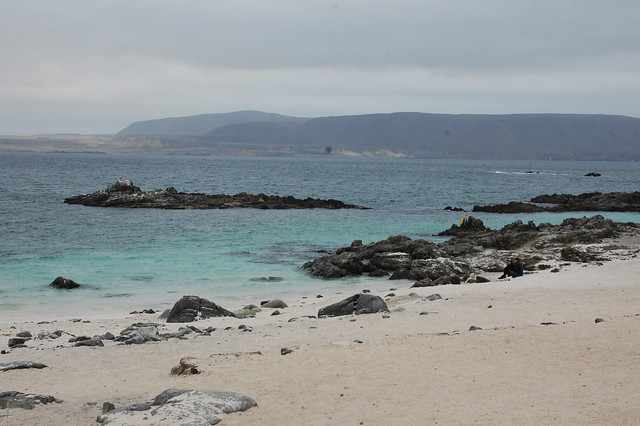 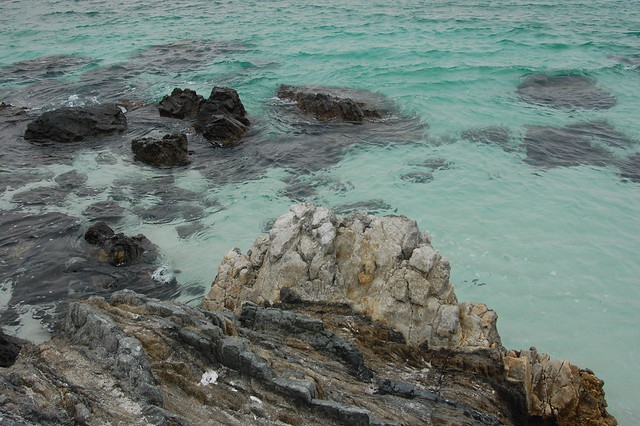 Bahía Inglesa is even smaller than Caldera, consisting mainly of beachfront restaurants and cabañas for rent during the tourist season. Although I had planned to spend a leisurely afternoon reading on the beach, the winter winds coming off the water were quite chilly so I decided to head back to Caldera. 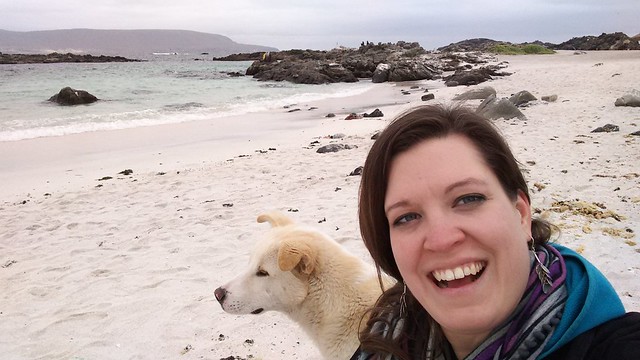 Selfie with a Photobomb by a Street Dog, Bahía Inglesa, Caldera, Chile

On the way, I stopped at a viewpoint overlooking Bahía Inglesa, where I took in the surrounding landscape. It surprises me how similar coastal Chile is to coastal Peru, considering the distance, with barren deserts inland and lovely beaches and bays on the water. 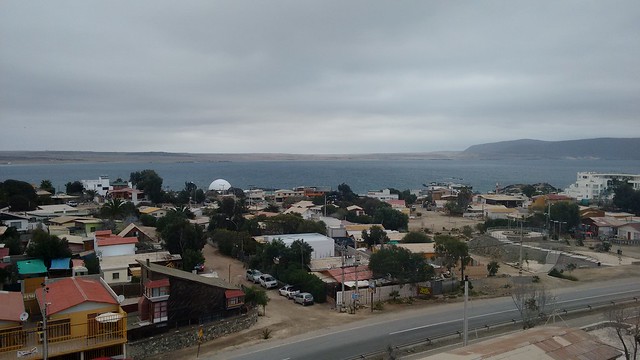 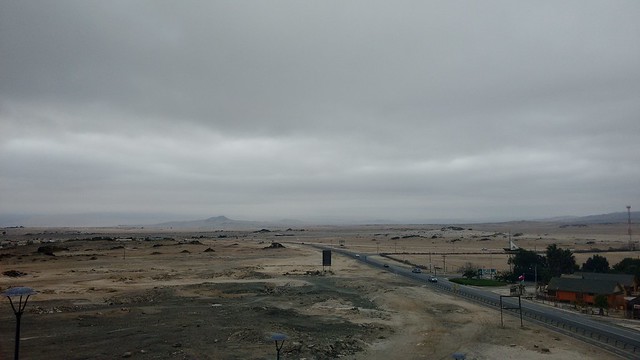 After returning to Caldera, I took another spin around the town. One thing I thought I would love about Caldera is that it hosts a moai from Easter Island. 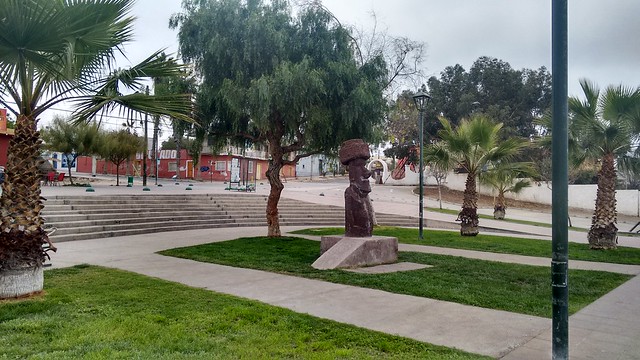 Easter Island is located at about the same latitude as Caldera, so the moai was donated to mark this relationship. 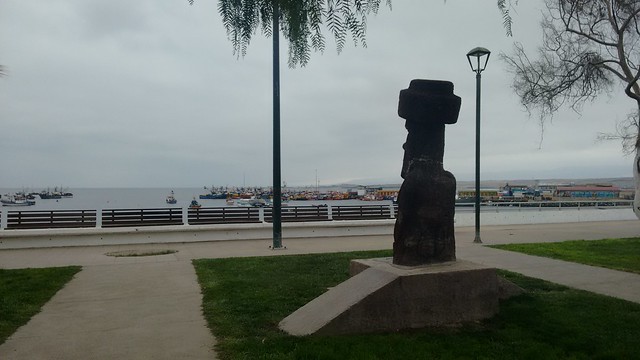 Moai from Easter Island, Looking Out to the Sea in Caldera, Chile

Unfortunately, as with many moai on mainland Chile, this moai has been treated poorly by visitors and is sadly covered with disgusting graffiti. 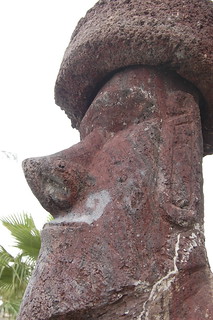 As the sun went down, I headed back to my hostal to wait out the remaining hours until my bus to Iquique, where I would spend the remainder of my winter vacation, enjoying the warmer temperatures of the north!