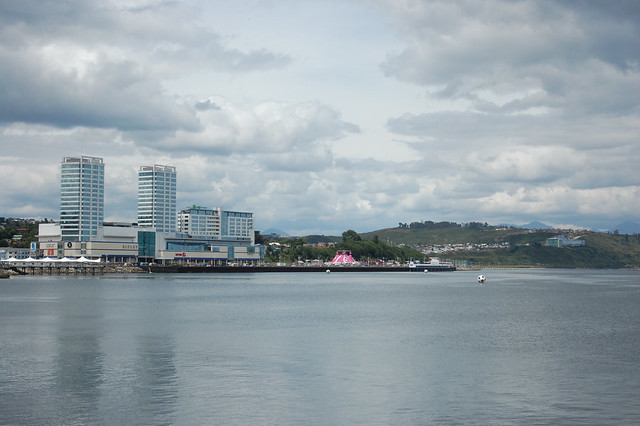 As the thick cloud cover and gorgeous blue sunset foretold on my first day in nearby Puerto Varas, the weather on my second day in the Los Lagos region turned grey and cloudy with the occasional sprinkle of rain . No matter – I had a very mundane errand in mind (take out cash at the only Scotiabank ATM in the region), so I needed to head to the commercial city of Puerto Montt anyway.

To be honest, I was curious about Puerto Montt because of its nickname, Muerto Montt, or Dead Montt, so-called because the city lacks personality. I have a fondness for port cities, like Iquique in northern Chile, and I like stepping outside of the tourist bubble and seeing how people go about their day-to-day lives. So I hopped on a bus to Puerto Montt to head to the bank and see what the city had to offer.

Street Market in Puerto Montt, Chile (Thanks for the photo, Sidetracked Travel Blog!)

Thanks to Google Maps on my smartphone, navigating a new city is that much easier. The bus route from Puerto Varas to Puerto Montt leaves Puerto Varas along Av. San Francisco, merges onto the Panamerican Highway heading South, and then enters Puerto Montt on Av. Presidente Salvador Allende (and let’s just reflect for a moment on how cool is it that this major road is named after the former president). At the intersection with Urmeneta, the bus turns away from downtown Puerto Montt, so I hopped off the bus and followed all the locals wandering down the hill towards the market and waterfront.

The first thing I noticed was the number of vendors lining the streets around the Santa Isabel supermarket at the corner of Pdte. Salvador Allende and Diego Portales, selling all kinds of local produce and other items. (Naturally, I ended up buying some more berries on my way back to Puerto Varas.) 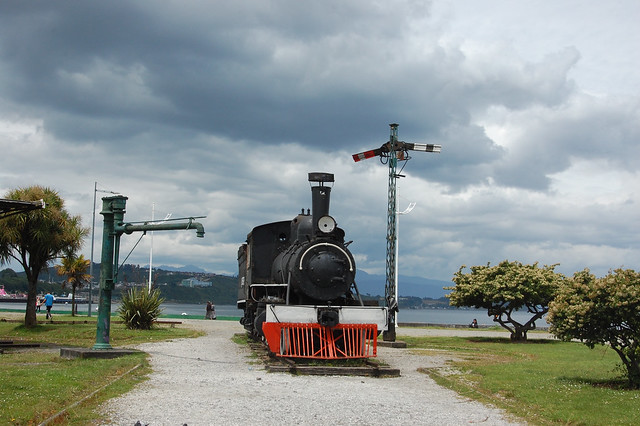 I continued walking down busy Av. Diego Portales (the start of the Carretera Austral) to get my bearings and get a sense for this hectic city. Puerto Montt is first and foremost an industrial city, its streets lined with big warehouses, superstores catering towards the mechanical side of the spectrum, and cheap hotels and eateries for people only planning a night’s stay before heading out on a ship or truck. I was starting to understand its nickname. Finally, I reached Puerto Montt’s main park on the waterfront. (Right next to the park is the Museo Municipal Juan Pablo II, which has exhibits on regional history and is probably worth a wander.) 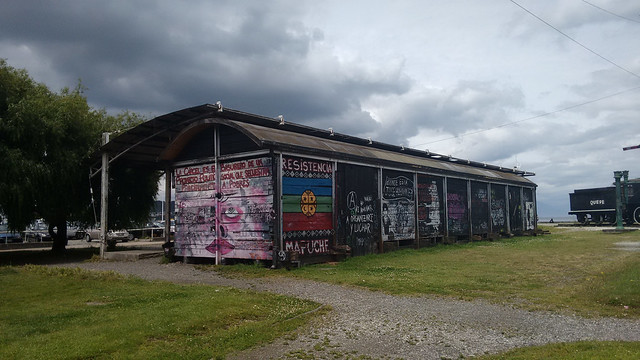 Murals near the Costanera in Puerto Montt 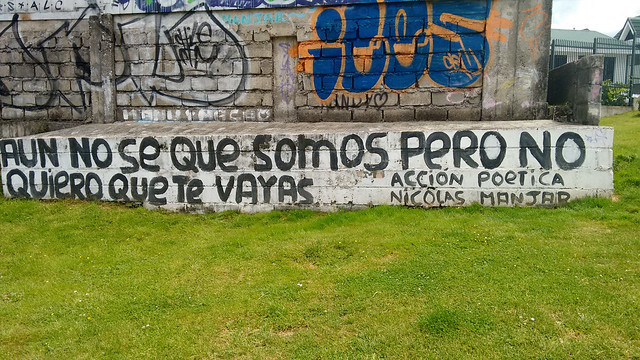 “I still don’t know what we are but I don’t want you to leave” – Graffiti in Puerto Montt, Chile

Drawn in by the random train in the middle of the park and what looks to be the former train station covered in intriguing political murals (note the Resistencia Mapuche painting in the photo above), I headed towards the costanera to enjoy a short stroll along the water. 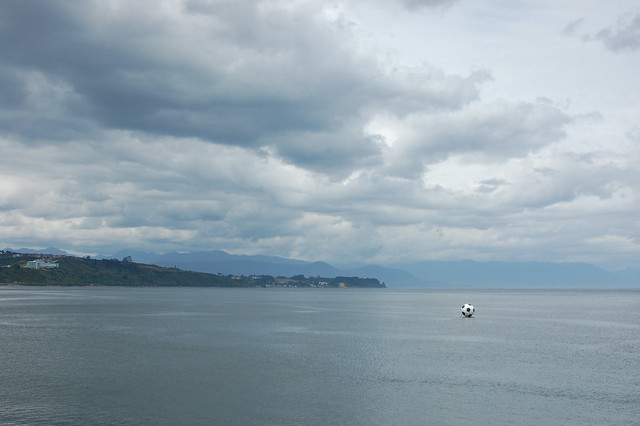 Obviously, what caught my eye as I looked out over the Reloncaví Sound were the unusual buoys in the shape of soccer balls. Whether this was celebrating Chile’s win during the Copa América or just the garden-variety Chilean passion for fútbol, I’m not entirely sure. 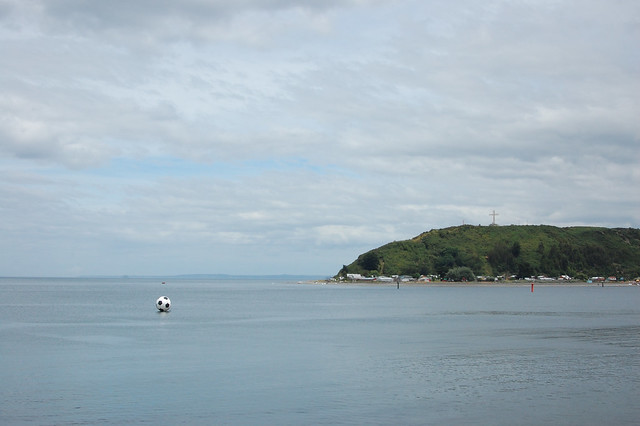 With the dismal grey clouds coating the horizon, there was not much to look at, but the water was calm and peaceful. 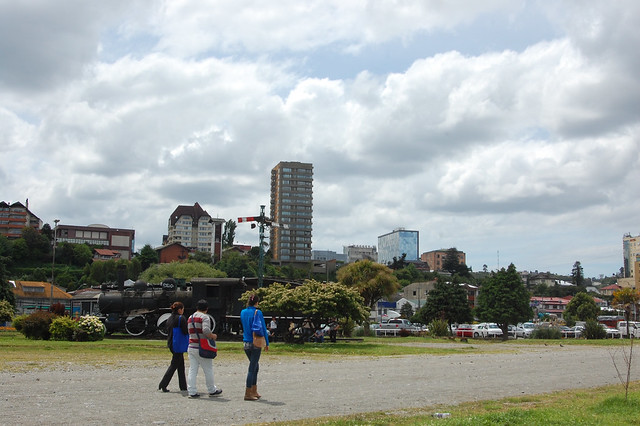 Walking Along the Costanera in Puerto Montt

Walking along the costanera is a pleasant way to take in the downtown skyline and the water. It takes you away from the noise of the rest of the city for a few moments. 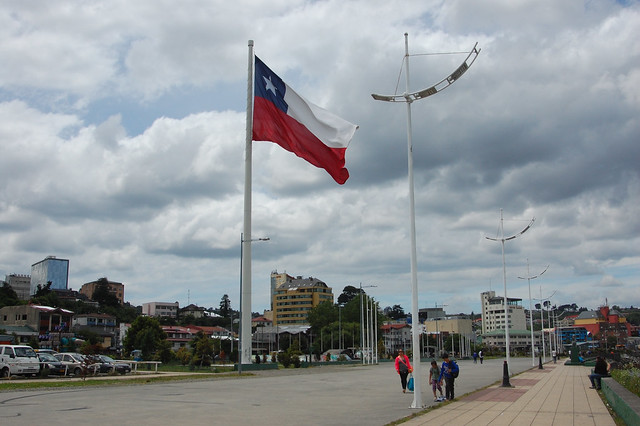 Chilean Flag on the Costanera in Puerto Montt 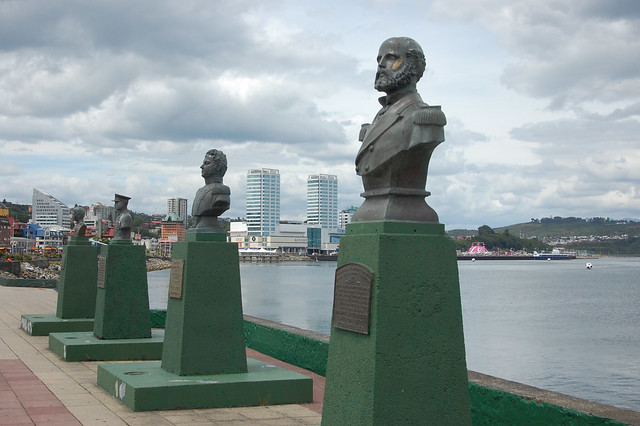 Monuments on the Costanera in Puerto Montt

One interesting part of the costanera is this series of busts honoring Chilean naval heroes. 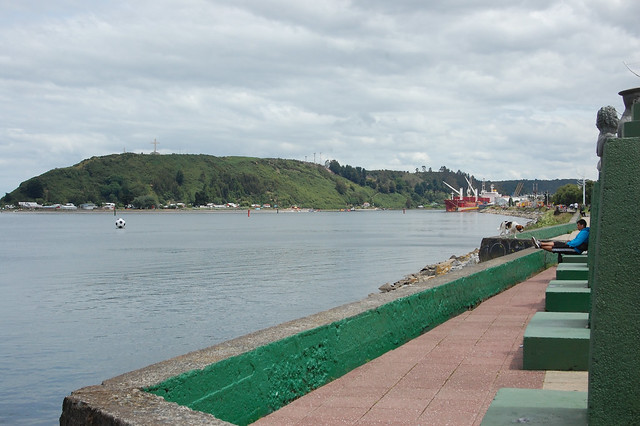 Relaxing Views over the Water in Puerto Montt 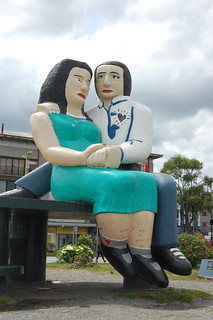 The other attraction along the waterfront is this giant sculpture of a couple in love. Cuddling by the water is probably a pretty popular pastime in Puerto Montt – I’m sure I walked past quite a few couples on the park benches. 😉 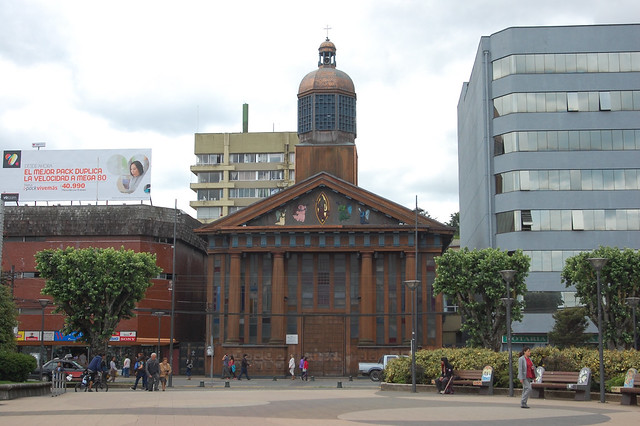 Next, I headed back toward the commercial district of Puerto Montt, making sure to pass by the main plaza. Puerto Montt’s cathedral, named Nuestra Señora del Carmen, towers majestically above the plaza and is a symbol of the city, constructed out of alerce wood, or Patagonian cypress. 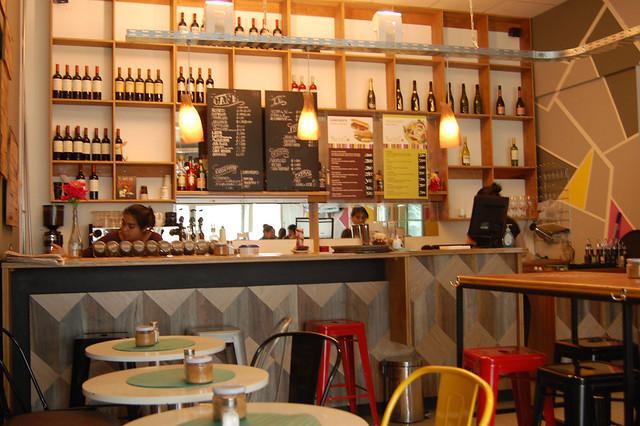 I continued my walk through downtown Puerto Montt in search of my next destination: a small restaurant/café called Sanito. I had read about Sanito in an article mentioning health food restaurants in Chile – it seemed to be the only vegetarian-friendly spot in the Los Lagos region. 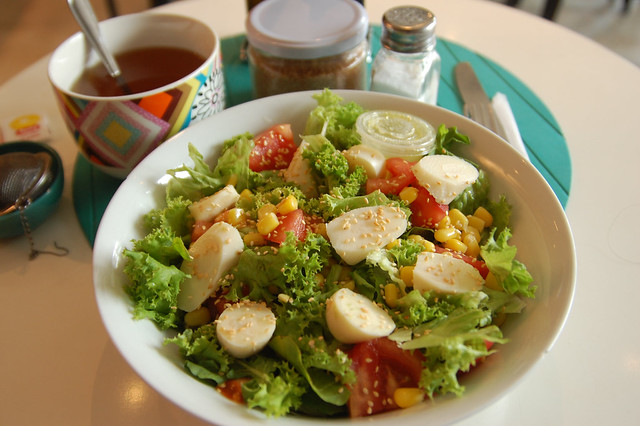 This café was definitely a little sanctuary in the middle of hectic Puerto Montt. Its bright interior and excellent music playing overhead gave me the sense that I was back in Cambridge. I opted for a delicious salad and was happy to enjoy some loose leaf tea! 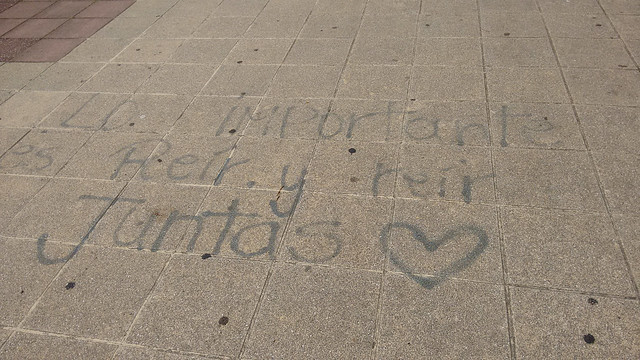 After my healthy lunch, I headed back through the commercial center in search of my bank and the Casa de Arte Diego Rivera, a theater and exhibition space dedicated to the Mexican muralist. Unfortunately, due to the holidays, it did not seem to have any current exhibitions, but I would suggest checking it out as there seem to be quite a few interesting events held there on a regular basis.

Other than that, Puerto Montt seemed to have a typical commercial downtown with lots of galleries and shops. Not in need of anything, I decided to head back to the market to buy my fruit and catch a bus back to Puerto Varas. In the end, I enjoyed the opportunity to contrast flashy Puerto Varas with scruffy Puerto Montt, and think it’s worth an afternoon’s wander, especially if you have some errands to run or want to take advantage of the markets.