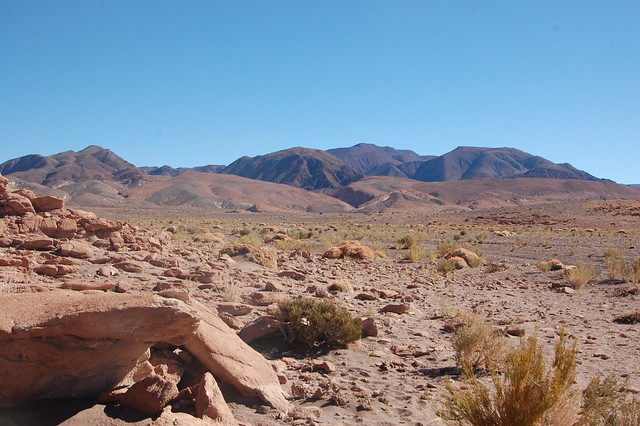 When I learned that the Atacama desert included a valley with rock formations in all colors of the rainbow, I knew I had to see this place for myself.  Many years before, I had visited the Cerro de los Siete Colores in northern Argentina, and I loved observing the different shades undulating in the hills of the Andes.  Unfortunately for a solo traveler such as myself, the Valle Arcoiris tour is less popular among tourists visiting San Pedro de Atacama; your ability to get to the valley completely depends on the interest of other visitors.  Fortunately, my luck continued, and I managed to find a tour company which had enough passengers to send the tour out to Valle Arcoiris.  This was the perfect way to spend my last day in San Pedro de Atacama. 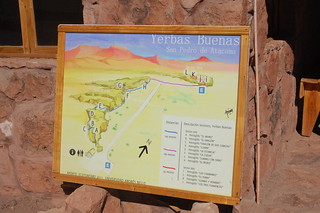 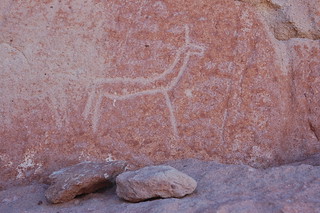 The trip to Valle Arcoiris includes a stop at Yerba Buenas (also known as Hierbas Buenas), a collection of petroglyphs (rock art) located at the crossroads of several major transit roads through the Atacama.  Here, visitors carved their stories into the rock, communicating their history and culture to future observers.  In this way, the markings reminded me of El Morro National Monument in New Mexico, where passing visitors recorded their names for posterity. 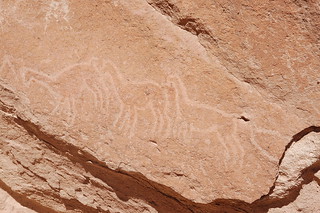 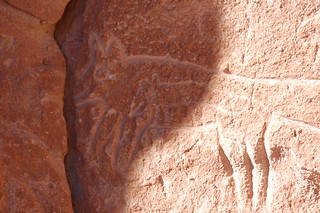 At first, I wasn’t that interested in the rock art; without any context, petroglyphs looks like crude sketches scratched into the surface of a rock.  However, our guide was truly special: a native Atacameño, he had lived abroad and spoke at least four languages fluently; he had also worked as a geologist and clearly had thorough knowledge of the history and culture of the region.  He was also a gifted storyteller, and our quick stop at the petroglyphs turned into a couple of fascinating hours as we listened and asked him questions. 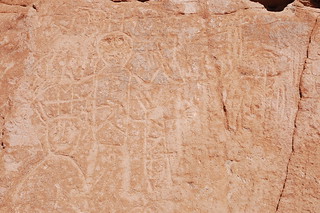 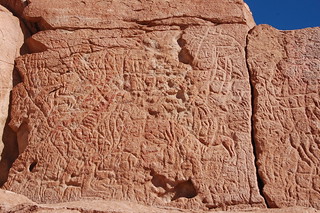 As you can see from the photos above, many of the petroglyphs represent aspects of daily life in the Atacama, including animals like llamas and other camelids.  The photo above shows a pregnant fox, represented by the baby fox included within her interior (you can click any of the photos to expand them).  Other images reveal chaotic gatherings of people and livestock with all different characteristics. 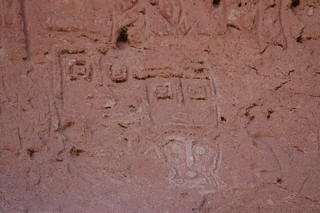 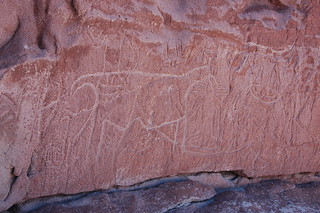 In our guide’s opinion, the different shapes and sizes of the heads and bodies of the human figures may represent contact between different ethnic groups, or, perhaps, they may indicate visitors from another planet.  He told stories of how coca leaves have been found in excavations of ancient pyramids in Egypt, even though they only grow in the Andes.  He emphasized that there are lot of connections between ancient cultures that cannot be easily explained.  While I’m not sure what *I* believe, his deep understanding of the Atacama and interesting descriptions opened my mind to considering other possibilities.  The image on the right shows several shaman, suggesting a highly important event; there may indeed be several reasons why these ancient meetings were so significant as to be recorded in these rock carvings.  We may never truly understand their messages. 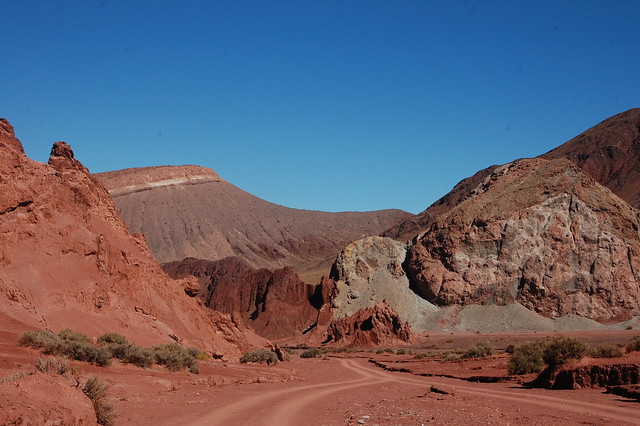 We realized that our intense interest in Yerbas Buenas meant that we had spent a few hours there, and we were actually running out of time to see Valle Arcoiris, or the Rainbow Valley.  As we drove into the valley, our guide explained that the differences in colors are caused by different mineral deposits in the rock. 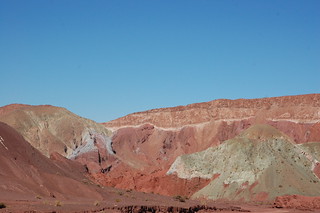 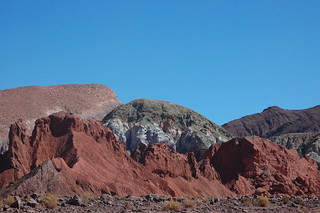 Everywhere we looked, we could see different shades of red, orange, green, white, brown, and grey.  We got out of the van to walk through parts of the valley and visualize how the rocks had been carved by glaciers and floods before the Atacama became an arid high altitude desert. 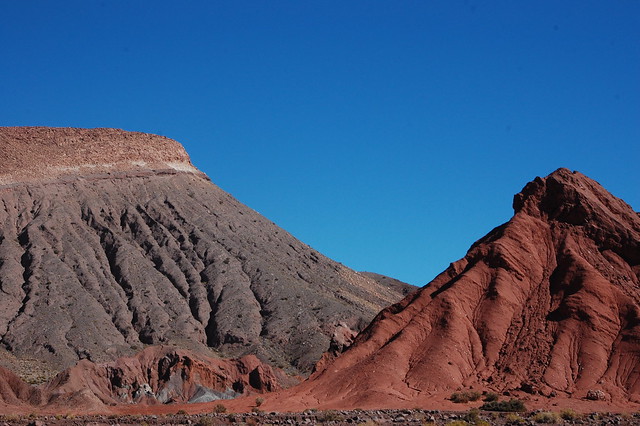 After taking in the Valle Arcoiris, we headed back to San Pedro de Atacama.  It ended up being a magical day where I felt like I really learned a lot about the Atacama region and all of its myths and mysteries.

Back in San Pedro, I stopped by the bus station to see if the border crossing with Argentina was open again.  For a few days, it looked like I was not going to be able to get to Salta as snowstorms in the mountains had closed the roads for days on end.  As it turned out, I was in luck: the border was open again and the bus was leaving at 7AM the next morning!  I quickly bought my ticket at the front of the bus so that I could have the best views.

After arranging to leave San Pedro the next day, I headed to the Museo R.P. Gustavo Le Paige, San Pedro’s archeological and anthropological museum.  This is a great place to learn more about the Atacameño culture and its contact with other indigenous groups, see artifacts and relics discovered during excavations, and appreciate the art and culture of the region.  For me, the most interesting part is the video of the discussions between modern Atacameños and the museum which resulted in the removal of Atacameño mummies from display out of respect for their ancestors.

That night, I learned a little bit about Chilean bureaucracy: since the bus would leave before immigration opened the next day, we needed to go to the immigration office in San Pedro to receive our exit stamps that evening.  After waiting for at least an hour, we were sent home and told to come back at 6:30 the next day to see if the border was still open.  While waiting in the cold was not my favorite part of the evening, it gave me a chance to chat with other travelers hoping to get to Argentina, many of whom had been trying to leave Chile for days!

I just hoped my good luck would continue the next morning; I was ready to move on to Argentina and revisit my favorite city, Salta.