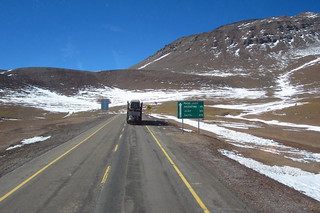 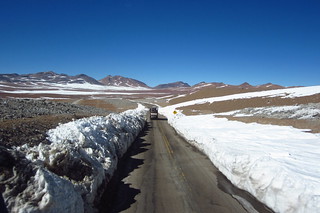 In the summer, crossing the border between Chile and Argentina is uncomplicated; however, the winter provides its own challenges.  Paso Jama is located at an elevation of 4,320 meters (about 14,120 feet); this high altitude means that it’s particularly susceptible to snowstorms.  When I arrived to San Pedro de Atacama, I learned that the border had been closed for several days after heavy storms, and no one could predict when it would be open again.  I wanted to visit Salta, Argentina, formerly my favorite city in South America, but I had to start thinking about alternative plans.

That said, it all worked out in the end.  🙂  The border opened again and I booked a ticket on the first bus leaving San Pedro de Atacama.  The buses alternate driving between Salta and San Pedro, which means drivers (and potential passengers) could be stranded for days on either side of the border after a snowstorm.

The weather had been touch-and-go for a few days, which meant that the Chile immigration officers were reluctant to give any advance notice about their plans to open the border.  The bus had originally been scheduled to leave at 7AM in order to give us sufficient time for slow driving along the highway due to one lane traffic, as you see above.  However, after waiting for an hour at the immigration post the night before, they decided not to give us our exit stamps and told us to return at 7AM the next day to see if we really could leave. 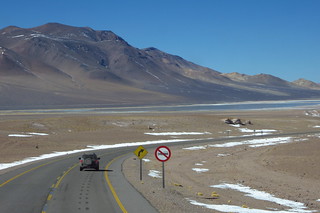 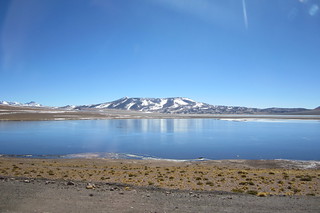 A long line formed at the immigration control, starting around 6AM that morning.  There are no other towns between San Pedro and the Paso Jama, so you have to go through immigration before leaving.  Truck drivers, people driving their personal cars, and bus passengers such as myself waited patiently and not-so-patiently to hear whether the border was open.  Rumors floated around that the San Pedro immigration office liked to show us their power by making us wait for our exit stamp.  Many people had been waiting to leave San Pedro for days.

Border crossings are situations when it always pays to find a buddy.  Luckily, the night before I’d chatted with a few people in line, and they remembered me and helped me find the group leaving on the Andesmar bus.  Our bus was packed with a large group of mostly American backpackers who were traveling together with a Chilean guide.  I also met up with two of my companions from the Valle Arcoiris tour, a Swiss woman and her son. 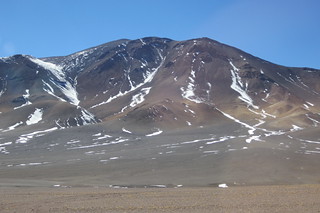 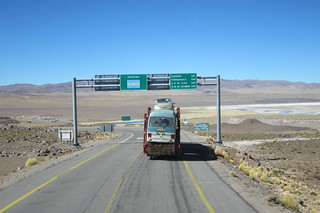 Mountains of the Atacama; Entering Argentina

As it turned out, the Swiss woman and her son and I became good friends over the course of our day together, one of those one-day friendships that enriches your travels and ends when you part ways at your destination.  I wish I could remember their names.  She was originally from Switzerland, yet spoke Spanish fluently as she had married an Ecuadorian.  Their 12-year-old son was growing up bi-cultural, as they had spent most of his childhood in Colombia, where she worked.  As it turned out, her husband preferred living and working in Switzerland, and he was there with their daughter while she was traveling with her son, backpacking through different parts of South America before returning to Colombia.  Her son was entering a challenging age, so this trip was a way to bring them closer together.  He was an extremely bright, energetic kid, and helped me out immediately by finding a place to store my backpack in the stuffed luggage compartment of our bus.

We waited in line for an hour and a half, waiting for the immigration officers to declare the border open and begin to stamp our passports.  Finally, our group moved forward with our bus drivers.  Suddenly, my Swiss friend realized she’d accidentally discarded their entry/exit cards.  She asked me to hold her purse, containing their passports and perhaps other valuables, as she raced back to their hostal to check the trash can.  I marveled at the trust she put in a fellow traveler; I had become a lot more suspicious over my year in Peru!  Luckily, she found them in record time and we were all able to get stamped out of Chile. 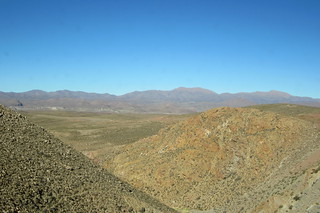 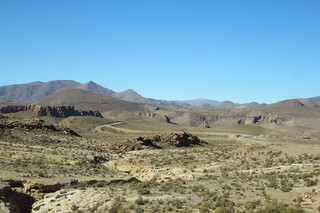 Views from the Argentine Northwest En Route to Salta

We piled on the bus.  As it turned out, no one was sitting next to me in the very front seat with the 360 degree window.  Most South Americans do not like sitting at the very front as it is vulnerable in case of an accident.  I had plenty of space to spread out and enjoy the ride.  My Swiss companions had also chosen to sit at the front of the bus, so we continued chatting in a mix of Spanish and English throughout the ride.

As you see from these photos, the ride between San Pedro and Salta is absolutely gorgeous.  I laughed when I saw how little snow appeared to be on the ground; being from New England, we see worse snow accumulation every year and often several times in one season!  However, Paso Jama does not get as much snow as the border crossings farther south (and farther from the equator), so they do not have the heavy equipment that Paso Internacional Los Libertadores (the border crossing between Mendoza and Santiago) does. 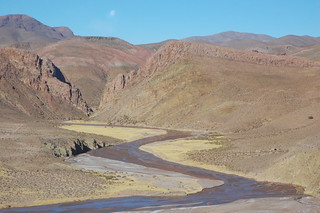 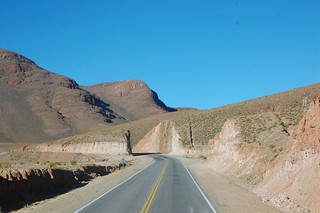 Views from the Argentine Northwest En Route to Salta

The route between San Pedro and Paso Jama was like revisiting the sights I saw over the past few days, albeit at a distance!  I admired the gorgeous mountains and hills and snapped lots of photos of the blue lakes as we passed by them.  The snow had limited the road to one lane in some points, and alternative routes had been cleared.  However, the ride was uneventful and we finally reached the Argentine border around noon.  The Argentine immigration complex is modern and surprisingly efficient; they are happy to collect your receipts for the $160 tourist visa.  Within 30 minutes, we continued on our way on the very, very long route to Salta.

The scenery on the Argentine side of the Andes is impressive and notably different from the Chilean side, with a lot more high altitude vegetation as we descended along Argentine Route 52.  The highway winds through colorful hills cut through with reddish rivers, topped by clear, cloudless blue skies.  This was why I returned to Argentina; I wanted to see these landscapes again.  I had fallen in love with this region on my first visit in 2002, after finishing my study abroad year in Buenos Aires. 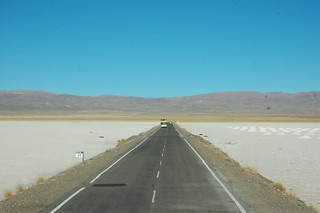 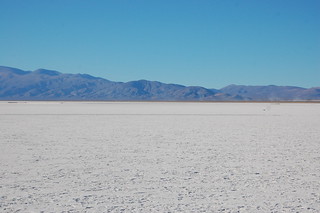 As we continued along our way, I began to doze off, as a result of having woken up super early to wait in line at immigration and the changing altitude.  I woke up, startled by the fact that we were passing through Salinas Grandes, Argentina’s white salt flats which provide a mini version of those found in the Salar de Uyuni in Bolivia.  I remembered my trip out to Salinas Grandes with my friend Mona all those years before, posing for funny pictures and appreciating the contrast of blue, white, and purple. 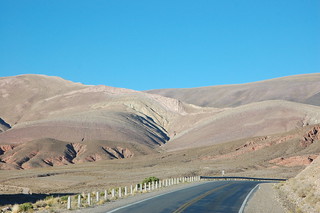 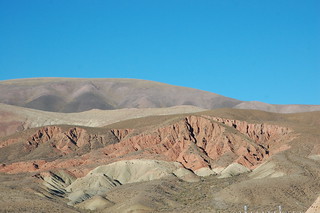 And the road continued on, with the mountains changing to hills.  These were the Argentine Andes I remembered, rolling hills that looked like a watercolor painting.  When I saw the first extremely variegated hills, I knew we were approaching Purmamarca, the home of the Cerro de los Siete Colores. 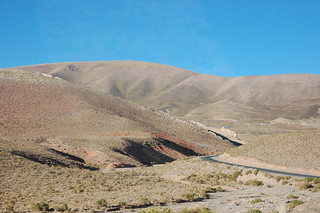 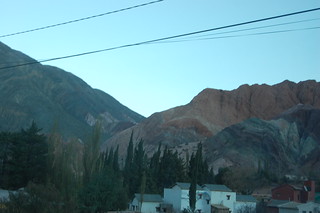 One of the travelers in the big American group decided to move up front to my empty seat, where the view of these colors was that much better.  Although the sun began to set behind the hills, the colors still peeked out from the hills in muted shades.  When other passengers got off in Purmamarca, I was tempted to join them and spend some time in this quiet town.  I was so happy to be in the Argentine northwest.

As the sun set, the American and I struck up one of those long, honest conversations that only happen when you never expect to talk to the person again, when you are open to sharing and listening because you are traveling and away from your normal life.  He told me about his life in the Midwest; he worked as a teacher and had the summers free to travel.  He often went on this packaged adventure tours where you were sure to meet other travelers.  He had married young and loved his wife and family, but I sensed his wanderlust behind his words.  He was very curious about my experience volunteering and was surprised that I was backpacking on my own, something he had not considered doing himself.  In the end, he gave me a great compliment, calling me one of his idols for living a non-traditional life and going with the flow. 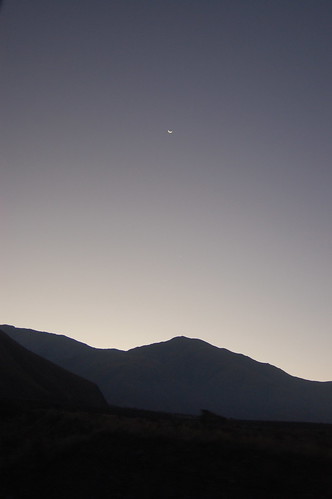 Sunset in the Argentine Northwest

As night fell, we continued rolling along the highway, stopping in Jujuy before continuing on to Salta.  At this point, we had been on this journey for nearly 12 hours and we were tired and ready to finally arrive.  At the bus station, I said goodbye to my Swiss friends.  After so many amazing days in Chile, my expectations were high.  I hadn’t been back to Argentina since 2007, and I was curious to learn how it had changed.  What I found surprised me.