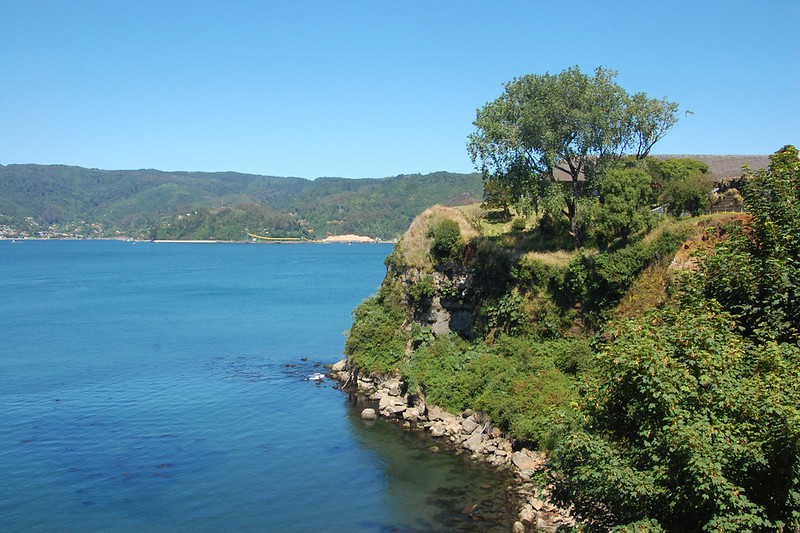 When I was in Ancud on the island of Chiloé, I met a traveler from France who was inspirational. In her late 60s or early 70s and fluent in Spanish and English in addition to French, she was backpacking on her own, getting off the beaten path, exploring independently, connecting with people by staying in hostels. So when she recommended I get out of the city of Valdivia and visit beautiful Niebla and Corral, I listened. 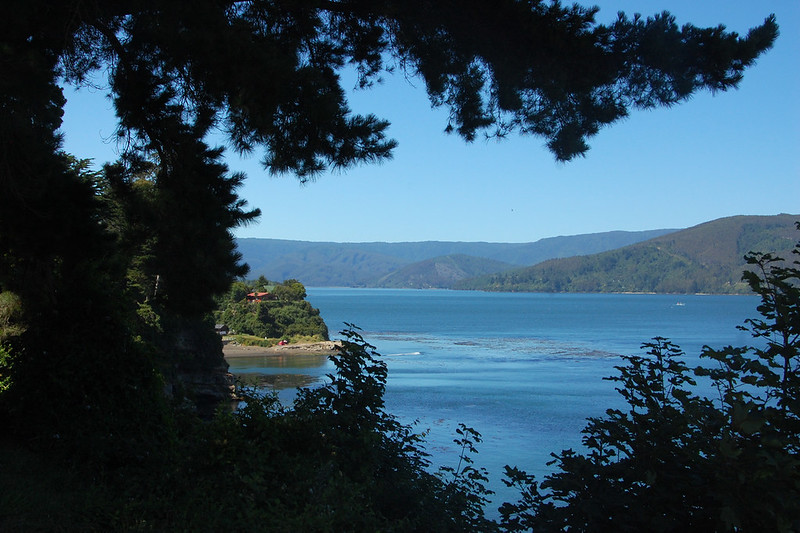 Thanks to the wonders of public transportation, it is easy to visit Niebla and Corral; you can take a local bus to Niebla, and frequent boat ferries are available to take you over to Corral. (Alternatively or additionally, you can visit tiny Isla Mancera, which is one of the stops for the ferries and also has an old fort and views of the water.) 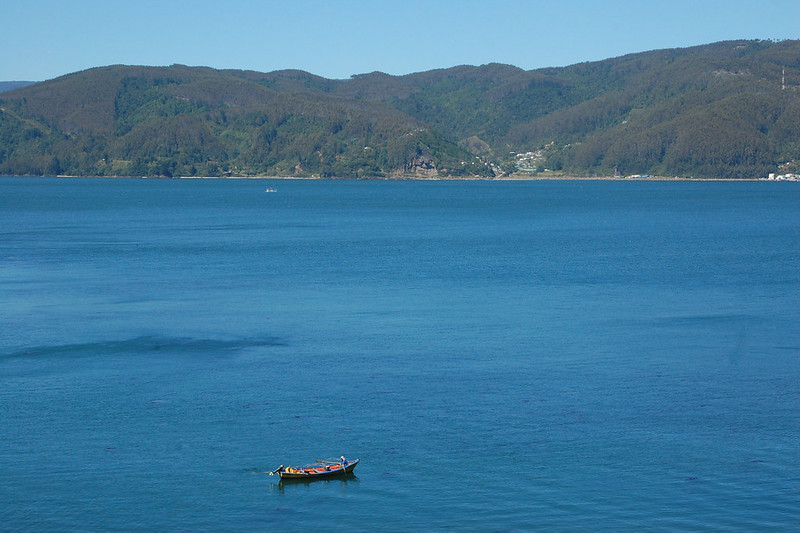 Upon arrival to Valdivia, I knew that I would spent my first full day heading outside the city to make sure I got a chance to get to know the deep blue rivers and emerald green forest landscapes for myself. We found the correct local bus and within 30 minutes, we found ourselves getting off the bus at the tiny main plaza in Niebla.

As it turned out, the old Spanish fort in Niebla was closed due to a strike; the employees of government-run museum were protesting unexpected changes to laws governing working conditions for employees of the ministry of culture. So although I have lovely pictures from the cliffs of Niebla, I didn’t get to see the inside of the fort or the views from the highest, most strategic points.

That said, we did stumble into a jazz performance in Niebla’s tiny little church and chat with one of the artisans selling her jewelry in Niebla, so it was worth it! 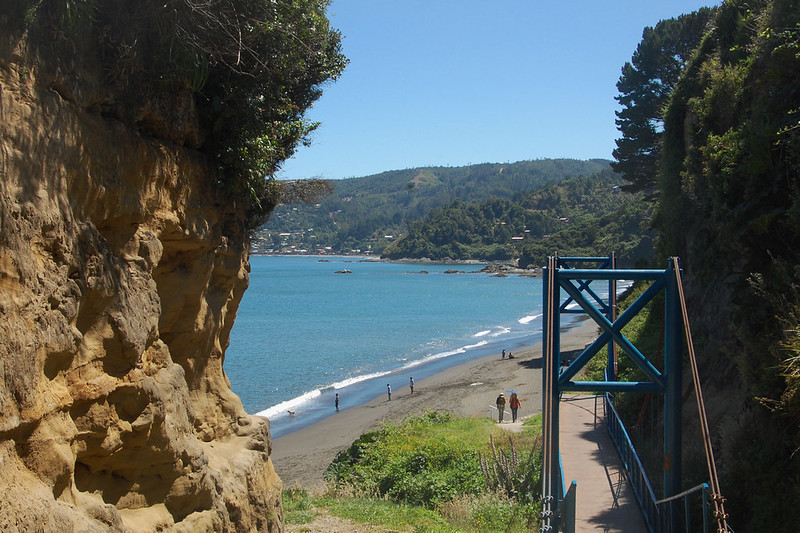 From there, we walked to Niebla’s beach, located in a secluded little cove on the water. Although the water was still fairly cold at the beginning of summer, I could see how this would be an excellent place to visit in late January or February, at the height of Chile’s summer. 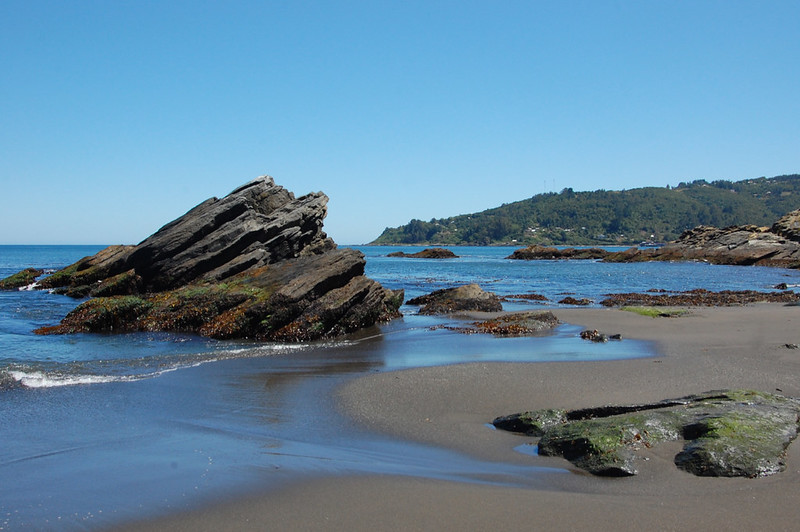 We walked up and down the beach to take in the waves crashing on the beach and appreciate the views of the wide expanses of river. As I have kept repeating in all of my posts about southern Chile: SO MUCH BLUE! 🙂 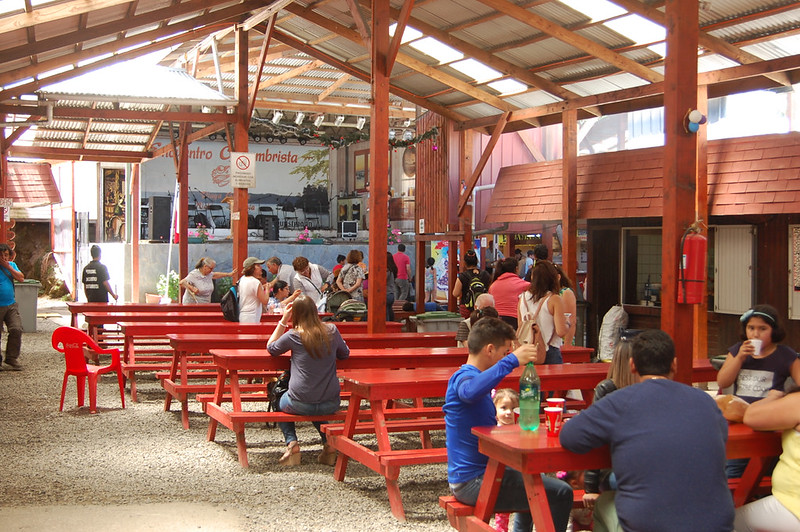 From there, we walked over to the Feria Costumbrista a few blocks away. In Spanish, costumbrista describes local or regional customs, food, and folklore; basically, traditional culture. Each town in Chile hosts an annual feria costumbrista, where stands offer typical Chilean foods and music and dance are performed throughout the day and especially at night. In the Valle de Elqui, this meant eating lots of churrascas; in southern Chile, this meant empanadas and German-inspired kuchen and pastries. All in all, it was a perfect place to eat lunch before continuing on our way. 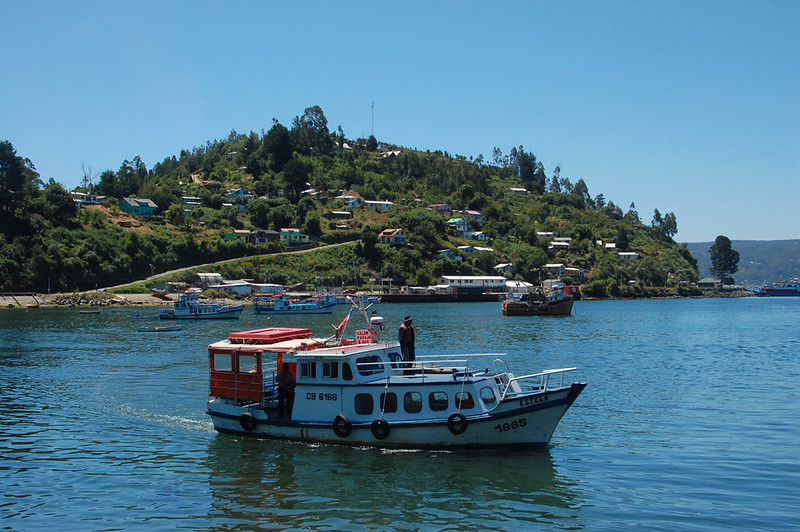 After appreciating Niebla’s small-town charms (basically, a southern counterpart to my life in northern Chile’s desert mountains), we continued our journey to Corral, where the goal was to see one of these old Spanish forts. We took another bus to the passenger ferry dock in Niebla, and within a few moments we were on board. 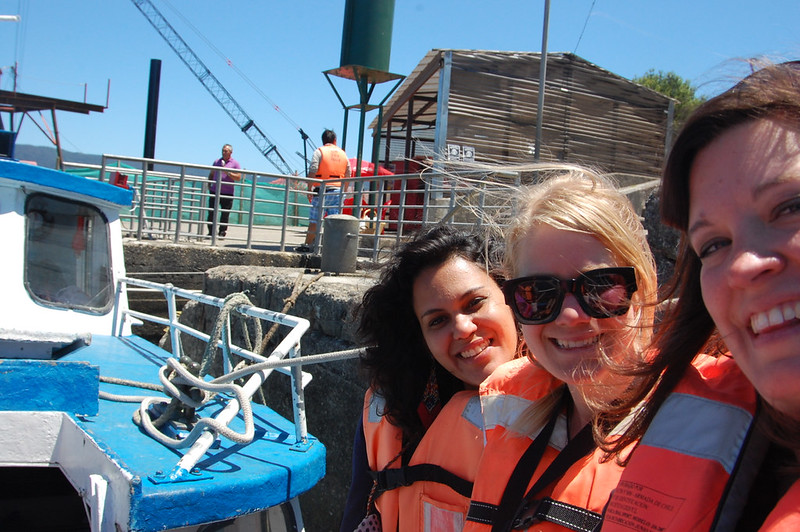 Naturally, if you’re not a frequent boat passenger, you want to head to the front of the boat where you can really experience the feeling of flying through the water, waves rippling out all around you. 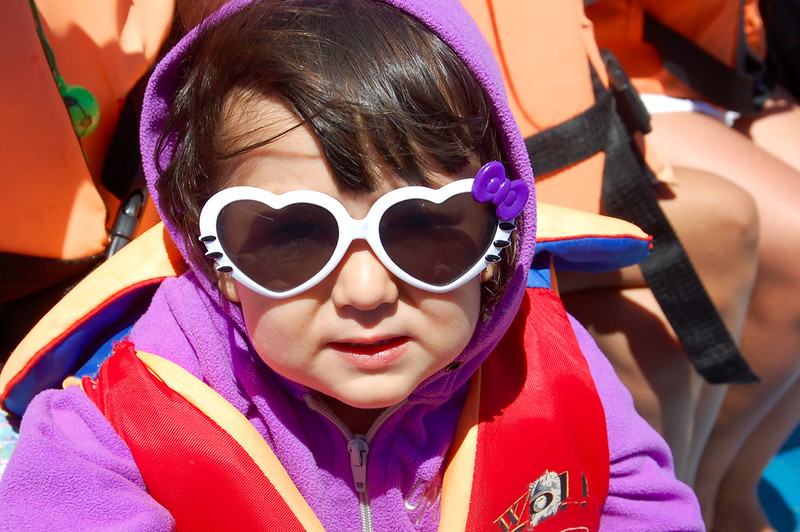 We were lucky enough to be joined by this adorable fellow tourist and her family, who found the trio of foreigners (US, Australia, and Brazil) quite fascinating. 🙂 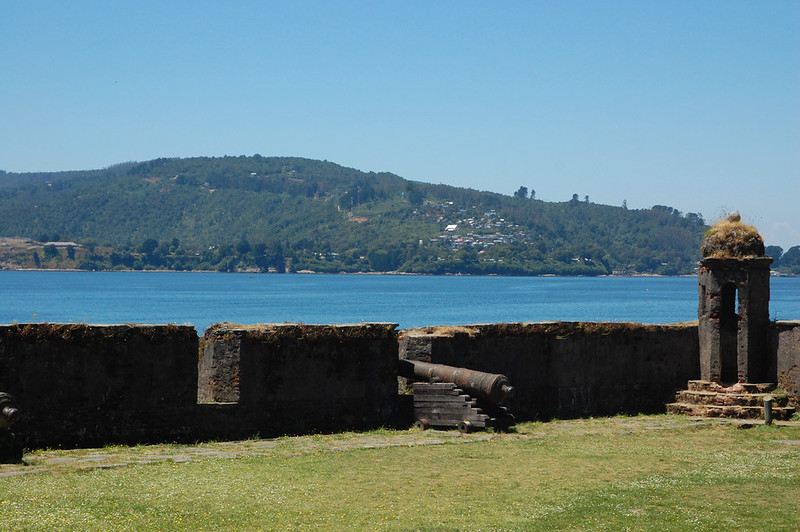 After a quick stop on nearby Isla Mancera, we reached Corral, where we were able to get even more perspective on the very typically Valdivian landscape (that’s why they call it Valdivian rainforest, right?). 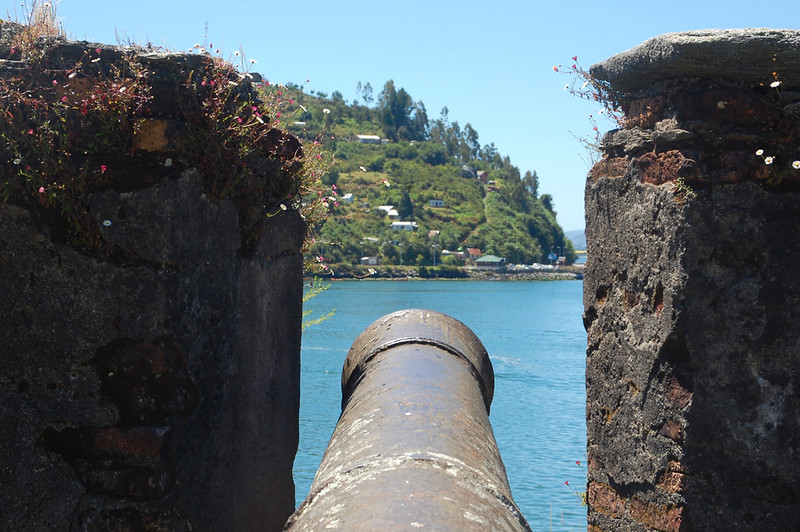 We walked up the steep hills to Corral’s fort, which is run by the regional government so was not on strike. We were free to wander around the grounds, looking out over the old cannons and trying to imagine what life would have been like for these Spanish colonists all those centuries ago. 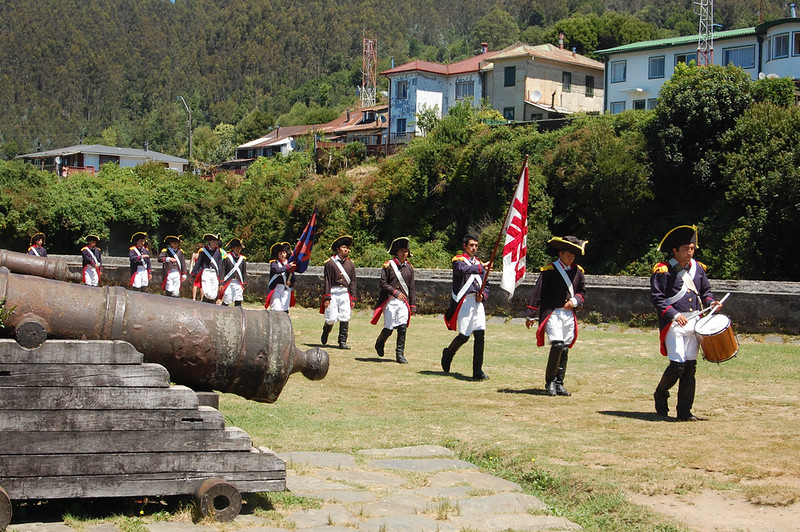 Lucky for us, we didn’t have to imagine too much; in the summer, the fort hosts daily reenactments of a major episode in Valdivia’s history, a conflict where Chile defeats Spain (Chilean military nationalism is a big part of the nation’s story, as I saw in Arica as well!). I enjoyed the hard work of the actors, so if the timing is right on your visit, I would suggest you try to catch it. 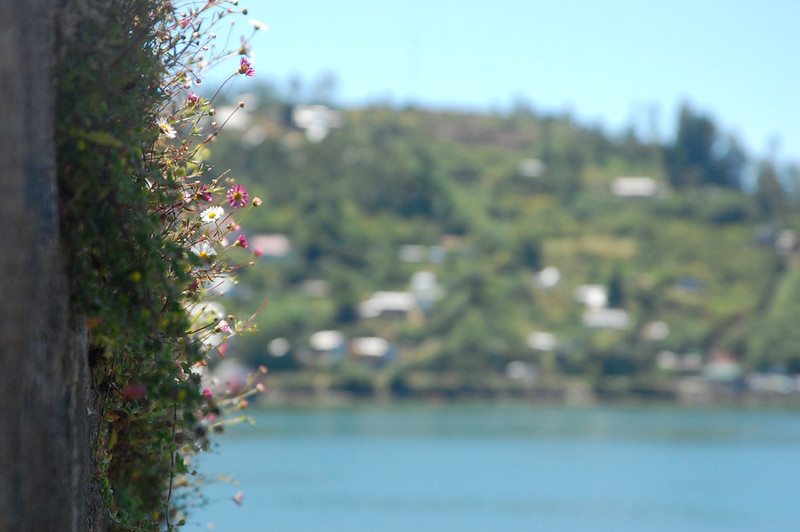 Besides that, there is not much to do in Corral besides appreciate the views from the fort. So I’m going to let the next few photos speak for themselves. 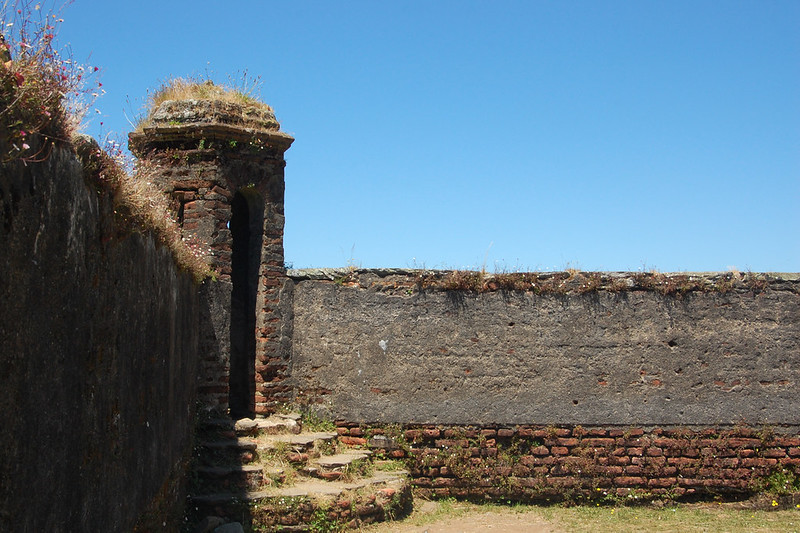 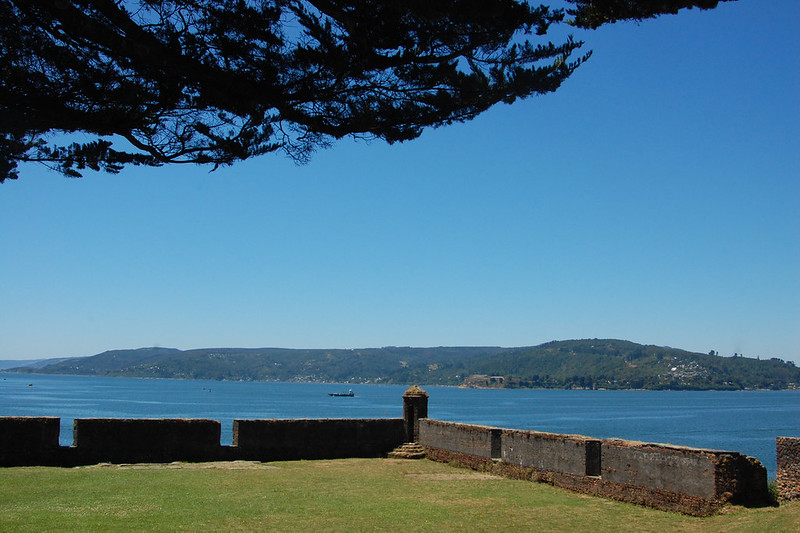 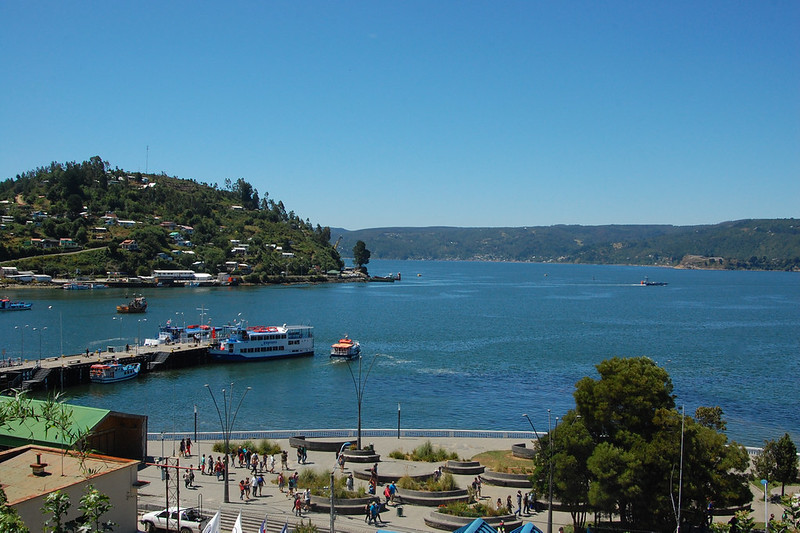 While we were waiting for the reenactment, we wandered a little further up the hillside, where we spotted these views of the recently restored plaza. (You can see the passenger ferry dock on the left side.)

And that’s about it for Corral! After an enjoyable tour of Castillo de San Sebastián de la Cruz (the official name of the fort), we had some ice cream and took a ferry back to Niebla. All in all, visiting Niebla and Corral was a perfect way to get another perspective on these small towns that had a significant role in the cultural, political, and military history of the Los Ríos region.