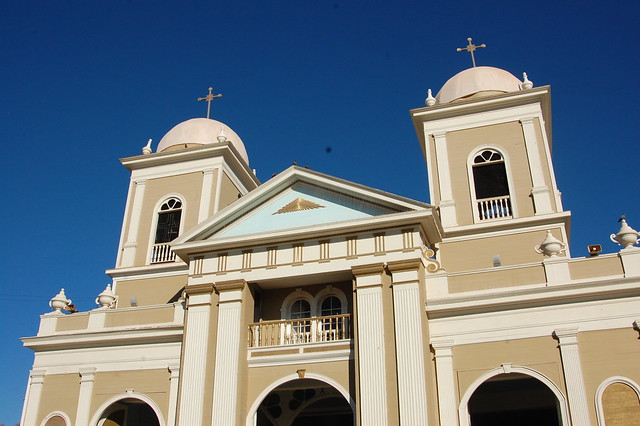 In my year living in the Valle de Elqui, one of my favorite activities was heading out into the orchard to see what fruit was coming into season and to pick a few figs, avocados, grapes, whatever was ready.  One of the best things in the garden was the lime tree, filled with the kind known as limón de pica in Chile.  (These small, round, green key limes are just called limones in Peru because they are basically the only type of limes or lemons you can find. Chile’s limones are oval and usually mostly yellow – what Americans know as lemons.)  After the heavy rains last summer, I gathered up several kilos of limones de pica that had fallen off the tree and enjoyed them for the next couple of months.  Suffice it to say, I’m a fan.

In any case, in Chile, the limón de pica was given its name because it grows extensively in and around the town of Pica, located in the region of Tarapacá, in northern Chile.  Only a couple of hours away from the busy city of Iquique, easily accessible by public bus or car, it is a popular destination for Chilean tourists. 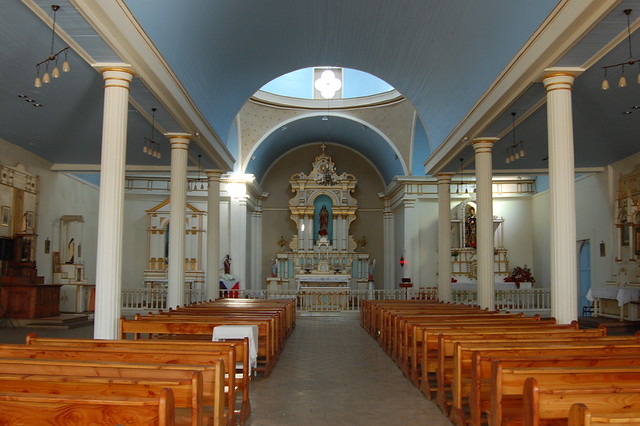 Inside the Iglesia de San Andrés in Pica, Chile

The route from Iquique to Pica climbs up the cliffs to Alto Hospicio (where I snapped this picture), and continues along Ruta 16 towards the Panamerican Highway, about an hour inland.  On the way, the highway passes Humberstone before arriving to the crossroads town of Pozo Almonte, right on Ruta 5 (the Panamerican).  Every bus stops in this transit center, where you can transfer to another if necessary.  Leaving Humberstone, I flagged down a bus heading to Pica and was able to snag a seat once half the passengers descended in Pozo.

From there, it’s about an hour to Pica, an easy ride through the desert.  On the way, you pass through La Tirana, a small town known for its famous religious festival celebrating the Virgen de Carmen.  The festival is celebrated from July 12-18 and is attended by thousands of people every year.  This celebration is particularly famous in Chile because it is the most traditionally Andean of any in the entire country; the dances are extravagant, fascinating, and entertaining.  While I visited the area in July, I arrived just after the festival had ended, so had to settle for watching videos in the Museo Regional de Iquique.  That said, on my way through, the small town was still doing a brisk business selling religious trinkets and welcoming quite a number of tourists. 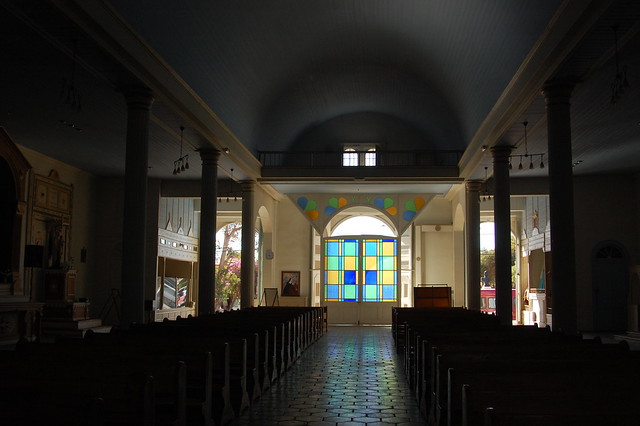 After passing through La Tirana, we continued heading through the desert, but as we approached Pica I started noticing the various patches of bright green foliage.  Pica is famous because it is a pleasant oasis in the middle of the large northern desert, which makes it a great place to grow hot climate fruit like mango and citrus.  And that was basically the reason I went there – to eat delicious fruit.  What can I say, I’m a simple person. 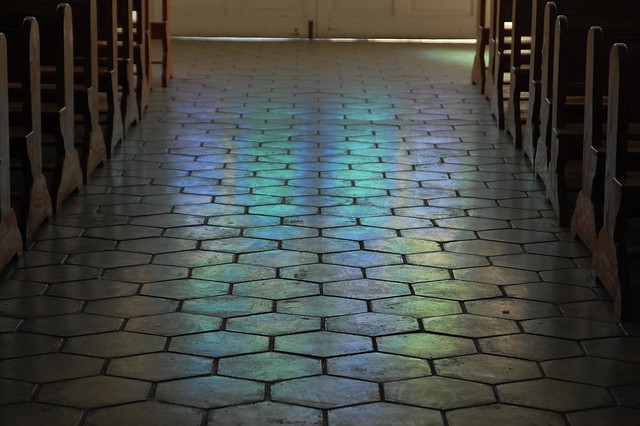 The bus route ends at the central plaza of Pica, where the first thing to catch your eye is the gorgeous Iglesia de San Andrés, as you see in the photos above.  This church is prized in northern Chile for its traditional construction and attractive interior.  I was particularly fascinated by the rainbow reflections of the stained glass windows, as you can see from the photos. 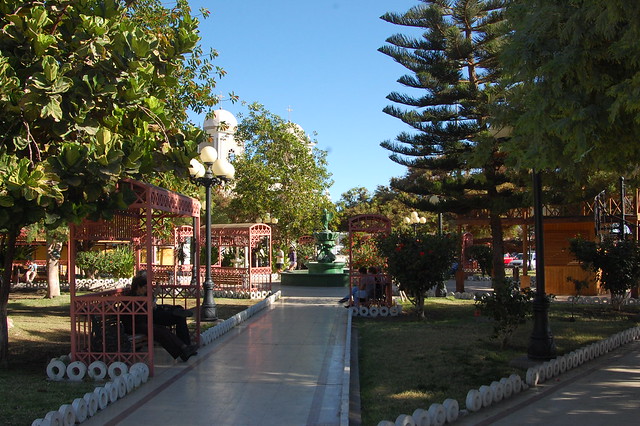 After checking out the cathedral, I walked around Pica’s main plaza.  As mentioned, Pica is an oasis, which means it has a much more agreeable climate than the relentless sun of the open desert.  After spending the morning exploring Humberstone, I was more than ready to cool off in the plaza.  And to be honest, that is basically all there is to do in Pica: sit in the pleasant plaza to while away an afternoon. 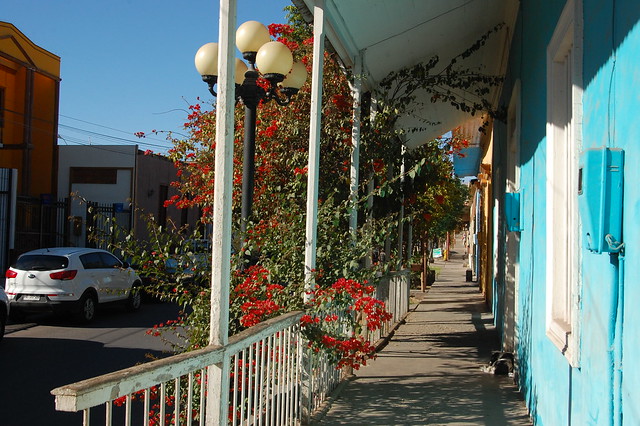 Pica has a number of old, traditional houses painted in bright colors, inviting you to admire them.  The main road hosts a library, several hotels, and a couple of stores offering Pica’s other specialty, alfajores de Pica.  The town is small, so it’s easy to wander around without getting lost.

If you continue along Calle Esmeralda, the main thoroughfare heads to Cocha Resbaldero, Pica’s other main tourist attraction besides the church and the fruit.  Cocha Resbaldero is a natural pool or thermal bath formed out of volcanic rock, popular with tourists interested in taking a nice relaxing dip.  As I was heading to Mamiña for its healing mineral waters the next day, I opted to skip the crowds (which you see here!). 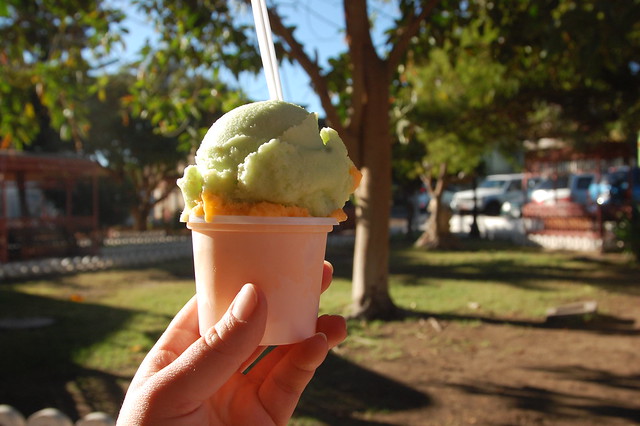 After sufficiently ascertaining that there was not much to do in Pica (and finding that there was not fruit on every corner as I expected), I headed back towards the main plaza. After poking around some more, I found a pleasant restaurant offering fresh juices and fruit by the kilo. I bought some early-season mangos and toronjas (grapefruit) and then headed back to a little storefront offering homemade ice cream.  As I am on a mission to try artesanal ice cream in every small town where I find myself, I couldn’t resist and tried out mango and guayaba (guaba). 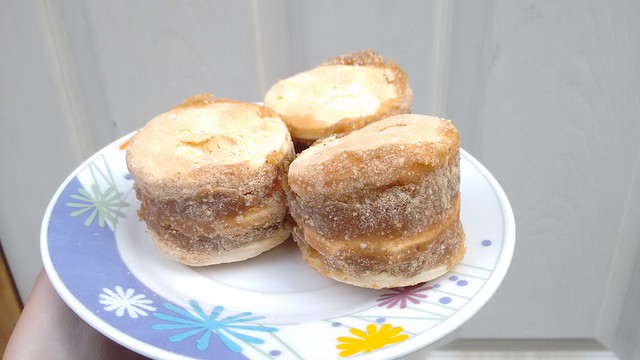 Before leaving Pica, I bought a couple of packages of alfajores de Pica, which differ from the usual alfajores due to the slightly different technique used to make them.  Alfajores de Pica have crispy cookie layers and are usually filled with mango jam rather than the traditional manjar.  They may also be rolled in coconut, completing the tropical flavor.

If you decide that it’s not worth trekking all the way out to Pica just to buy some alfajores, they are often sold by vendors at the transit hub of Pozo Almonte and can be found in supermarkets in Iquique.  Similarly, there are juices made with fruits from the region at the Mercado Centenario.  Either way, visiting Pica makes for a pleasant day trip when combined the nearby attractions of Humberstone and La Tirana; visiting the oasis provides a nice break from the surrounding desert.