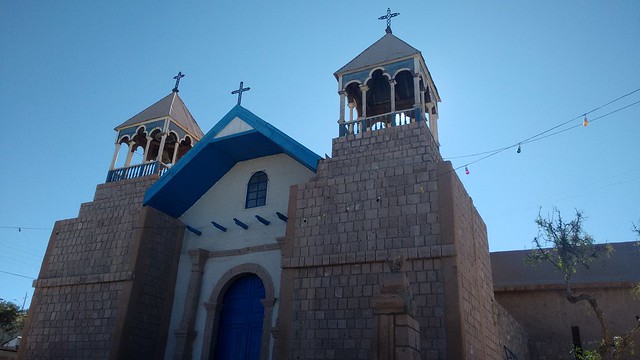 When I decided to travel to Iquique, I knew one of my stops would be Mamiña, a small town in the desert known for its healing mineral waters. According to the legend, an Incan princess named Mamiña recovered her sight after washing her eyes with the water that flows through the town. Today, Mamiña is a popular stop for miners seeking to relax their tired muscles and people treating a number of health complaints. It is also a common day trip for your average tourist like me, looking for a relaxing soak in thermal baths. 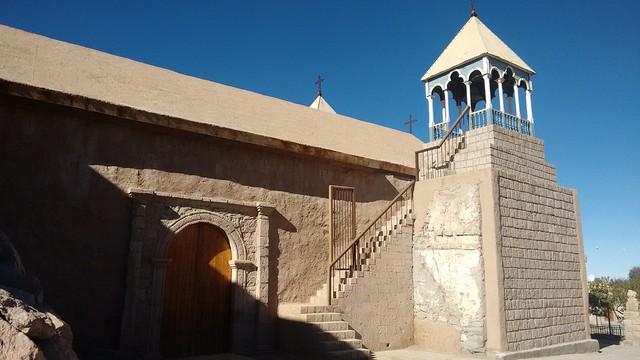 Throughout my travels through South America, I have taken many a thermal bath and elected to skip several others. In Cachueta, near Mendoza, Argentina, the thermal waters give a sense of luxury among the picturesque Andes. In Baños del Inca, near Cajamarca, Peru, a rather sterile complex has grown up around one of the Inca’s favorite places to relax, where the thermal water is piped into a tiny cell-like bathing room. I wasn’t sure what to expect in Mamiña. 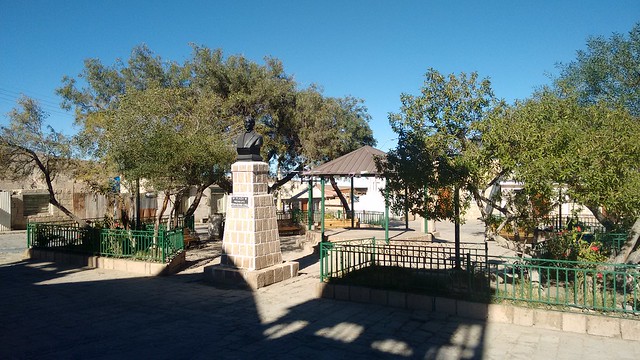 Although tours can take you to Mamiña, they cost between $25000-$35000CLP per person, which is quite pricey for someone on a nonprofit salary. Beyond that, I wasn’t that into sharing a relaxing bath with other tourists. After a little bit of research, I discovered that public buses to Mamiña leave daily from just outside the Mercado Centenario in the center of Iquique (see details, below). 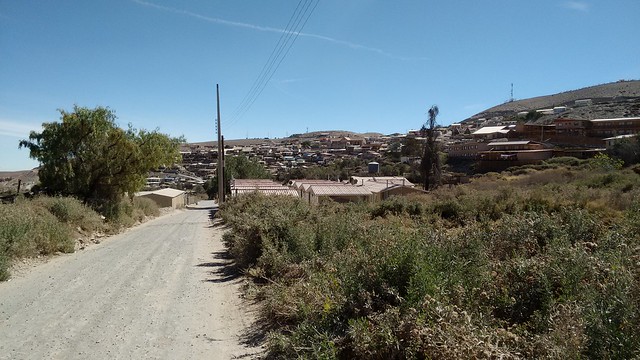 The route passes through Pozo Almonte en route to Mamiña, giving you a chance to buy breakfast in the dusty transit town. From there, it is a mostly paved road to Mamiña and a steady climb in altitude. The bus first stops at the plaza of Mamiña, which hosts an attractive old church. Don’t make my mistake and attempt to get off there; the town is separated into a lower and upper section and the bus will take you all the way to the thermal baths above town. 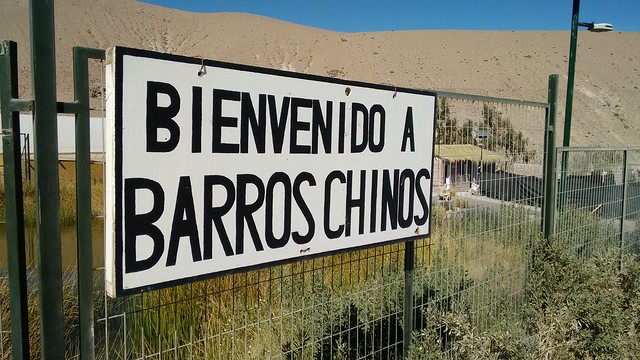 By the time we arrived, it was about 11AM, which is a good time to get there as the sun was just starting to get strong. The bus dropped us off at Barros Chinos, where I got ready to take my first ever mud bath. 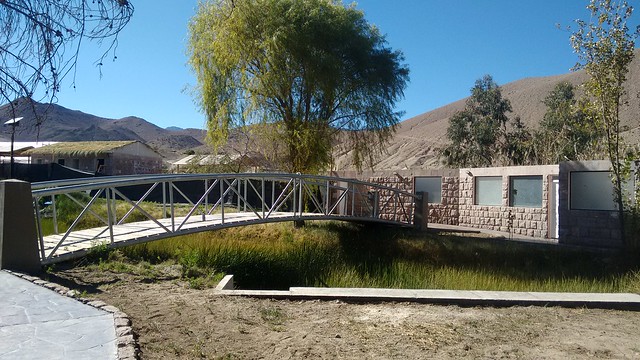 After paying a $3000 entrance fee, the gentle, friendly staffperson points out the changing rooms and the mud bathing rooms, one for women, men, and mixed, for families. I headed into the women’s bathing room, where the attendant brought me a bucket of mud and kindly offered to apply it to my back as I was on my own. 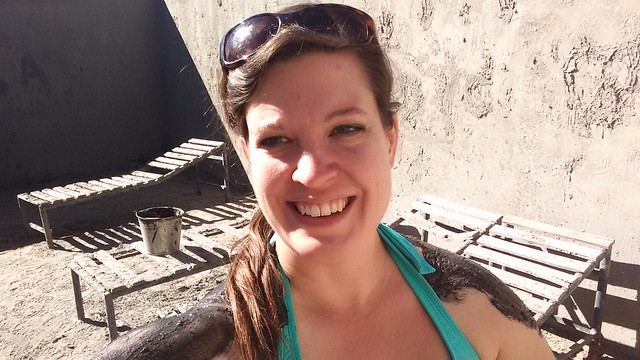 Coating Myself in Mud at Barros Chinos, Mamiña, Tarapacá, Chile

The instructions are simple: coat yourself all over with mud and sit in the sun for 30 minutes to let it dry. When I started slathering the mud on, I started laughing so hard tears ran down. I never thought I would voluntarily coat myself in mud! Other ladies came in and told me that the mud was supposed to be good for your hair and skin. I wasn’t quite ready to put it in my hair but I tried it on my face, which the nice man captured for posterity. 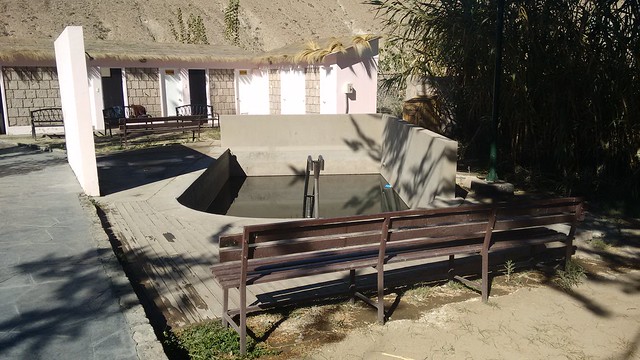 After 30 minutes, I was antsy and ready to get into the thermal bath itself. Despite the strong sulphur smell, the bath itself is a pleasant temperature, with pockets of water which almost burn your feet. The pool you rinse off in is actually just carved out of the ground and you definitely touch the mud bottom. Not for the squeamish. 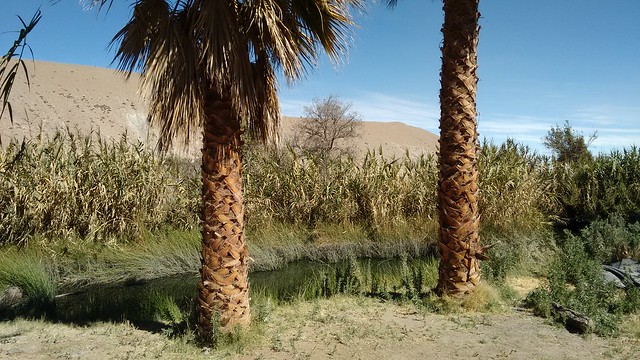 After stepping out of the thermal bath, I attempted a quick rinse under the frigid showers and changed back into my clothes. I had a couple of hours to kill by wandering through the residential part of town and eating my lunch. There are few places that offer lunch, so as a vegetarian, I opted to bring my own food. 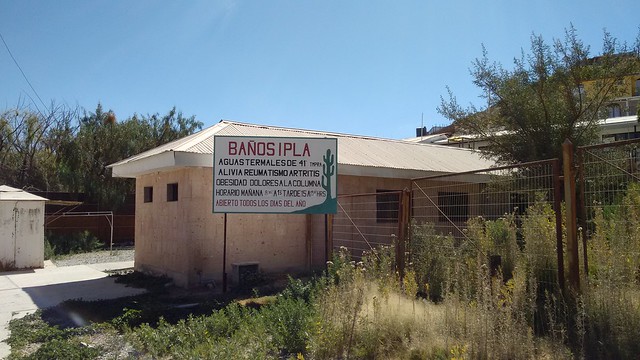 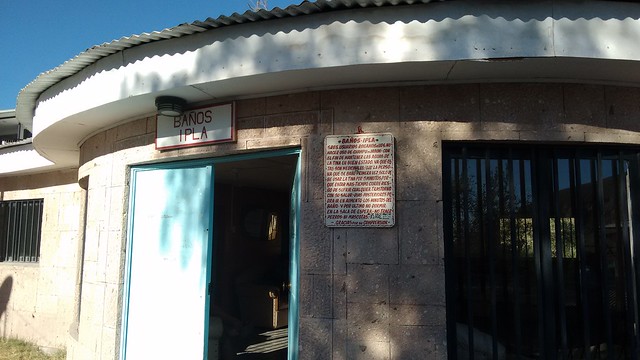 After the traditional siesta, Baños Ipla opens back up for business. I was one of the first ones through the door and headed into my own private room, which is basically another thermal bath carved into the floor. Because the baths are sourced right out of the ground below, the water which comes in is full of what looks like dirt and minerals. And the water is hot. Seriously hot. Signs around the small complex recommend a bath of only 5 minutes, and up to 10 minutes for later visits, once your body has built up tolerance. 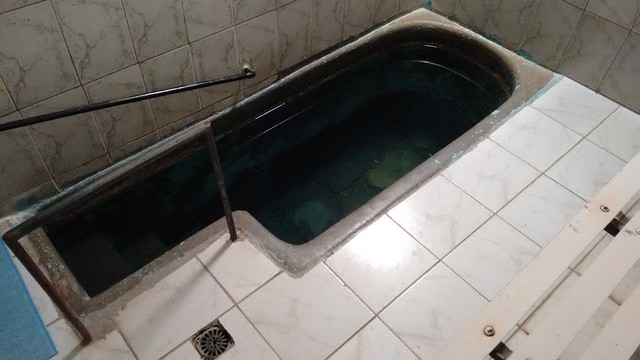 Take this advice seriously – submerging in water this hot is no joke. After your five minute dip, you should rest for about 10 minutes on the wooden recliner. After so many months feeling cold, it was an amazing feeling to be so warm, right through to my bones. I needed the recovery time to stretch out my muscles and let my blood pressure return to normal. Afterwards, you head out into the waiting area to let the relaxation set in a little more.

Around this time, a local came by to the little stand outside the bath complex, offering delicious fresh juices. I opted for guayaba, since it’s not a fruit I see too often. 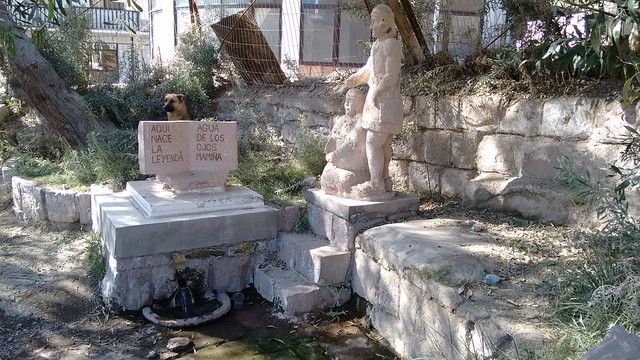 Source of the Healing Waters of Mamiña, Tarapacá, Chile

After enjoying my juice, I walked behind Banos Ipla to see the small monument to the site where Mamiña had her vision restored, which would have been a relaxing place to read if it weren’t for the construction going on at the hotel a stone throw’s away. 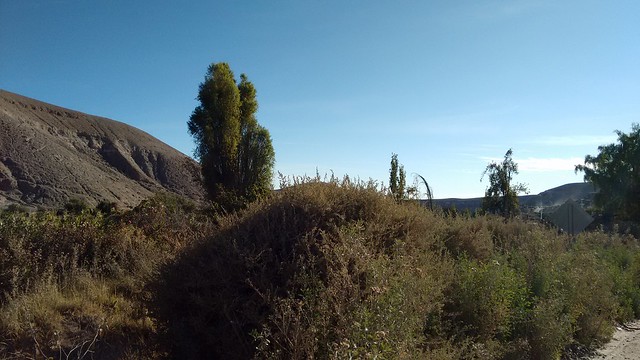 The rest of the afternoon was laid back, with those of us who had come in on the bus waiting around Baños Ipla until it was time to catch the bus back to Iquique. It was a pleasant afternoon, definitely at the Chilean pace, where there is nothing in particular to do, so you get the chance to embrace downtime. 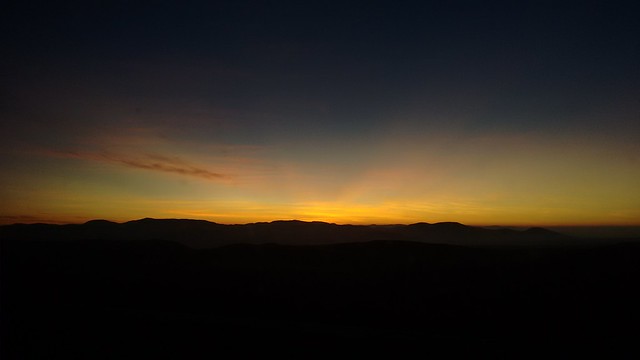 Sunset Over the Desert in Tarapacá, Chile