While I still have some free time as I look for a job, I’m trying to catch up on various projects, so it’s about time I describe the road trip that got me here in the first place.  As I’ve mentioned previously, I had a lot to do before my big road trip, but one of the things I didn’t do was overplan.  With over three thousand miles to cover and the potential for winter weather derailing the best laid plans, I decided to keep my schedule flexible.  Before this trip, the longest distance I’d ever driven was from NH to NYC, about 5 hours, and for this journey, I knew 5 hours was the absolute minimum I would drive between two destinations.  How would I feel?  What would I want to see?  I gave myself some flexibility to figure that out as I went.  Friends and family stressed about my trip for me, I just focused on the present moment.

Looking at the map, it hit me that I could realize a number of dreams on this trip: visiting the Grand Canyon, exploring some of New Mexico, particularly Albuquerque, where I’d considered attending graduate school, and traveling along Route 66.  Instead of taking the southernmost route, I decided to spend the majority of my drive on Route 40, which more or less follows the historic Route 66.  I plotted some possible stops based on distance and my own interest, and decided to bypass Phoenix and head directly to Flagstaff, Arizona.  Flagstaff is about 8 hours from San Diego and a short drive to the Grand Canyon, with a nice affordable hostel, perfect for a roadtripper’s budget!

After returning from San Francisco, there was not much to do except to finish packing, shipping, selling, and giving away my belongings, which I was doing right up until the morning I left.  On December 9, I got up early to ship some final packages, packed my car with all my random belongings, then deep-cleaned my apartment so my landlord could inspect it before I left.  (My biggest recommendation on that front is wear gloves even with natural cleaning products!  My hands were dry and cracked for almost a month afterward!)  It took a little longer than expected, so I finally left at 2PM.

Leaving San Diego was a surreal experience.  I just got in the car and drove away from my home of three years.  Just like that, I was free! 🙂  I started on Route 8, one of San Diego’s main freeways, which I’d driven more times than I could count to my job in El Cajon, but then I kept going. And going.  El Centro was my last stop in California, and as I drove up and down the mountains into Arizona, the sun began to set.  A fitting end to my California life.  After refueling in Gila Bend, Arizona, I headed north around Phoenix, ending up on Route 17 to Flagstaff.  The drive was relatively uneventful, save for stopping for border patrol along Route 8.

A classic moment:
Border Patrol agent, peering into my car, totally packed with my belongings, with a comforter covering the mess and bags of food scattered on top: “Where are you headed?”
Me: “New Hampshire,” laughing on the inside.
Border Patrol agent: “You’ve got a long drive ahead of you.”
Me: “I know!”

As I continued along Route 17, my car’s thermostat kept dropping and the sides of the road revealed the piles of snow from a recent storm.  I left San Diego where it was around 60 degrees, and as I climbed the mountain, I watched the temperature drop to 30, 20, 10.  When I arrived in Flagstaff around 10:30 at night, I realized I should probably change out of my flip-flops before stepping out of the car.  Brrrr!

Checking into the hostel was easy, I unloaded my most valuable possessions from the car, and before long I was settled and eating a late meal in the common area, chatting with a Canadian heading north from Guatemala and Mexico.  And then I finally slept, a well-deserved reward after a hectic day.

The next morning I woke to hear some other guests discussing how they couldn’t get to the Grand Canyon on the shuttle that day, also the only day they could go.  One voice was of my Canadian friend from the night before, and I knew I could save the day, so I stepped outside and asked, “Why don’t you come with me?”  The other guy, an American, said, “Do you have room for two?”  Knowing how packed my car was, I was a little apprehensive, but then they offered to help me unpack and repack my backseat, and just like that I had two buddies for my trip to the Grand Canyon.  Both guys were super nice, fun to talk to with interesting stories of their own, and inspirational travel partners because they got me to do a snow hike that I hadn’t planned for but was glad I did.

As we entered Grand Canyon National Park, the girl at the booth asked, “Where are you going?” I looked at her, confused, and said, “the Grand Canyon?”  She laughed and gestured to the packed backseat.  “Oh!  I’m moving across the country but am giving these guys a ride.”  We laughed about my completely matter of fact response to a question that seemed strange to me with our destination evident.

And then we were inside the National Park, continuing our drive, when suddenly we glanced to the right and BOOM! there it was.  The gorgeous, snow-covered Grand Canyon.  I’ll let the photos speak for themselves. 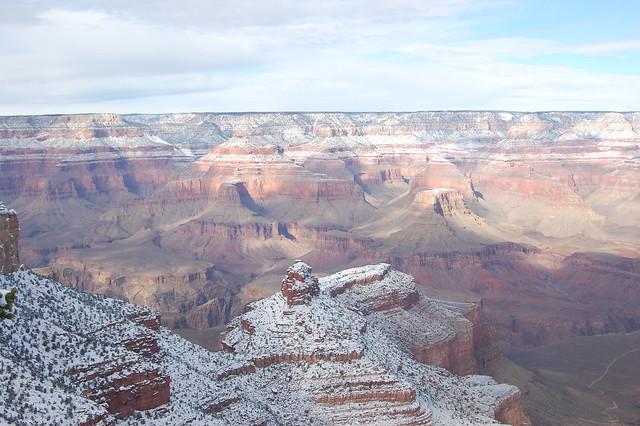 We checked out some viewpoints, grabbed some lunch, and then did a small hike down into the Canyon, against some of my nervous protests about the cold, snow, sunset, etc.  Luckily, my Canadian friend brought a helpful hiking “companion” which really upped my confidence. 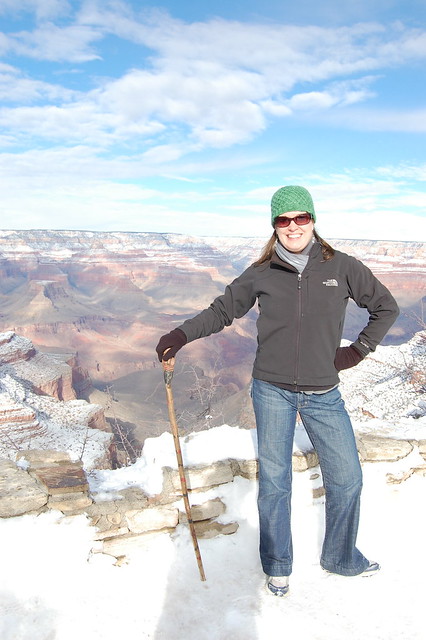 Even though we did hike in a lot of shade, we still got a good perspective of the canyon walls.  I plan to return someday to do a longer hike in a different season. 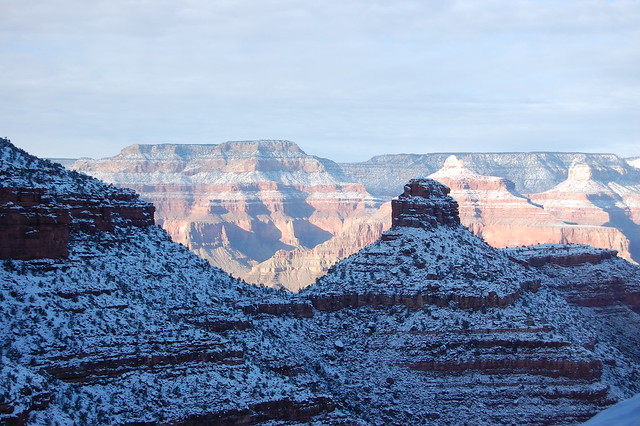 After hitting the first hiker’s rest stop on the path down, we hurried back to the top to see the sunset.  The setting sun made for some gorgeous pictures, both of us posing and and of the colors of the canyon walls. 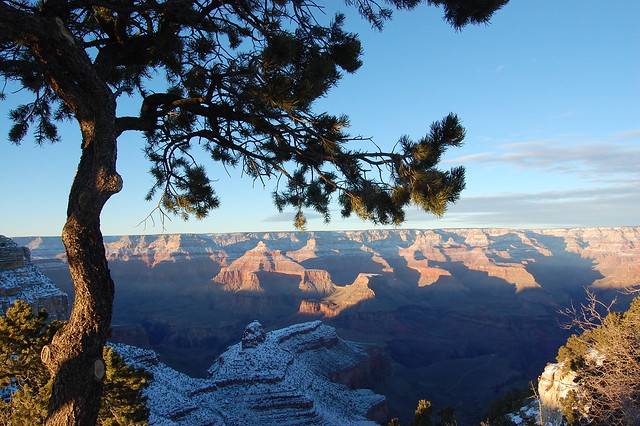 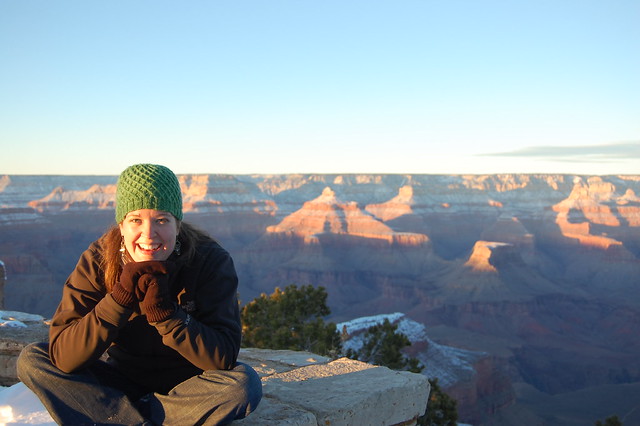 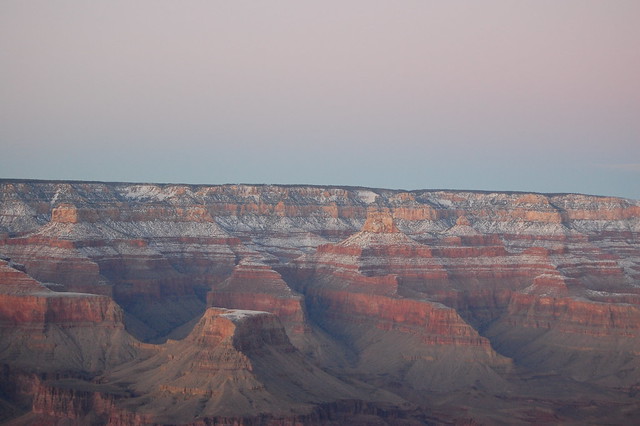 It turns out I was lucky to go that day, the first of many lucky decisions I made.  The roads had just been reopened after a big snowstorm; the next day, the canyon was hidden by clouds; and the day after that, another blizzard was supposed to hit.  I was very thankful that it worked out: the Grand Canyon was amazing and a perfect opening to the road trip.