I can’t believe it’s been 3.5 months since my road trip. With life totally getting in the way, I’m way behind on recapping. So here goes.

The best part of the actually on-the-road portion of the trip was driving from Flagstaff to Albuquerque. It gave me a chance to follow the historic Route 66, stopping off in small towns in Arizona and New Mexico which had faded away as the highway rerouted traffic from the main street of America. I also knew I’d have a chance to check out a couple national monuments. So after eating breakfast, saying goodbye to my hostel buddies, and repacking my car, I took off.

The only downside to having a destination in mind (and trying to beat potential weather issues) is that you kind of have to breeze past the first potential stops on your path, because you are not sure how much time you’ll need for the subsequent stops. You also want to drive as much as you can early on, before you get tired and bored of the road, and I personally prefer driving during the day when you can actually see the landscape. Though Albuquerque is only about a five hour drive from Flagstaff, I had to budget a few more hours to stop and explore along the way, which meant my detours in Arizona pretty much consisted of taking an exit, driving along Route 66, and getting back on at the next exit or so.

But I did make sure to pass through Winslow, AZ, memorialized in Route 66 lore. It is a completely deserted ghost town, nothing much to see, just abandoned motels and tourist markers at the famous corner. While a bit freaky, it was also fascinating. But the best part of the early drive was passing through the Painted Desert of Arizona. After falling in love with the mountains in Mendoza, Argentina, I’ve been equally in love with how mountains can take color as if they were painted using watercolors. Arizona’s Painted Desert was gorgeous to drive through, but unfortunately I only have my memories (and Google images). The striations were really beautiful. Take my word for it. I wasn’t too interested in the detour to see fossils, but on another trip I would try to find a way to walk about and photograph the landscape.

After observing the gorgeous landscape (which really reaffirmed my joy for this road trip, as if the Grand Canyon and Sedona weren’t enough), I continued on to Gallup, New Mexico, where I drove up and down Route 66. Though the old highway is run down in many other areas, it’s in pretty good shape in Gallup, which is one of the more sizable cities in this area. However, there are plenty of abandoned motels, and it’s just kind of staggering to realize how many motels were needed to house all the people passing through. For lunch, I found a random burrito joint, the Chili Factory, in a strip mall. But one thing you quickly learn about New Mexico is that even the most generic looking restaurant still serves up good New Mexican burritos. Even though I’d studied my food options beforehand, I forgot that you have two choices for chile, red or green, or if you’re daring, Christmas, a mix of both. I started out with red chile, the more mild of the two, and even though I got a simple bean and cheese burrito, I realized that there was something about New Mexican food that totally beat out San Diego style burritos. It’s the chile. (Though I have to give credit where it’s due — I now need more heat on all my food thanks to Mexican cuisine in SD.)

After considering stopping to shop, I got back on the road, detouring off of Route I-40 south on Route 603 to drive across the region on Route 53.  With the weather only semi-cooperative, I experienced my first time driving in (very light) snow in a long while, but luckily it wasn’t too bad. For a while, I questioned if this detour was even worth it, as the landscape was dull and the weather was ugly. But my questions were answered once I got to El Morro National Monument, otherwise known as Inscription Rock.  From the approach, it didn’t look like much; I even asked the staff member if it was worth the entrance fee.  But you know what?  Seeing the signatures of people who passed through this area, stopping at this point hundreds of years before is actually pretty damned cool. 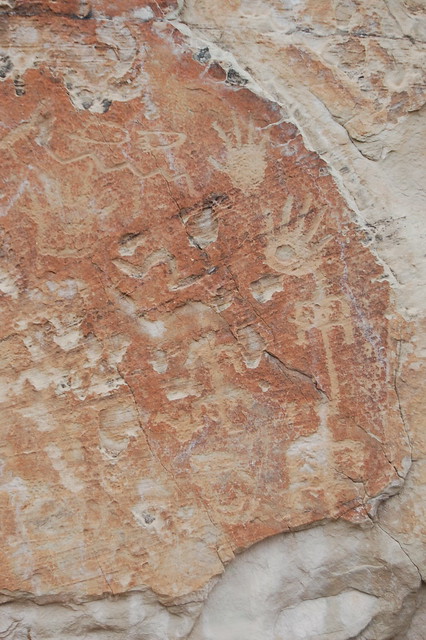 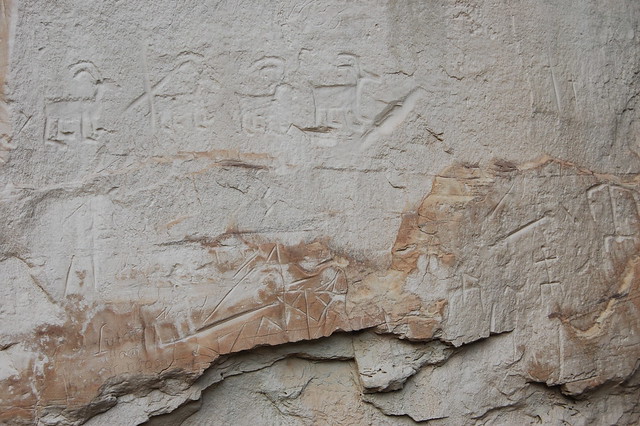 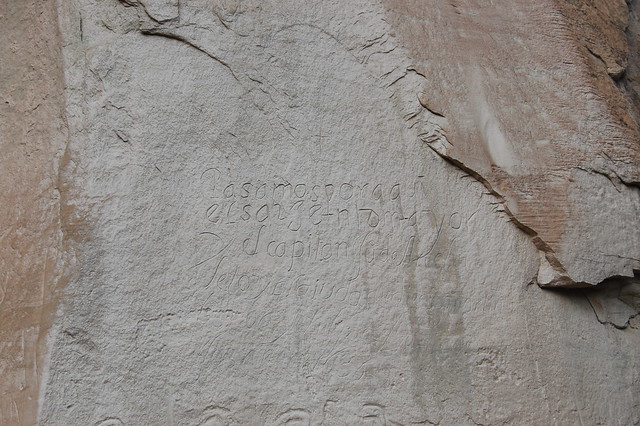 …to Americans settling the west… 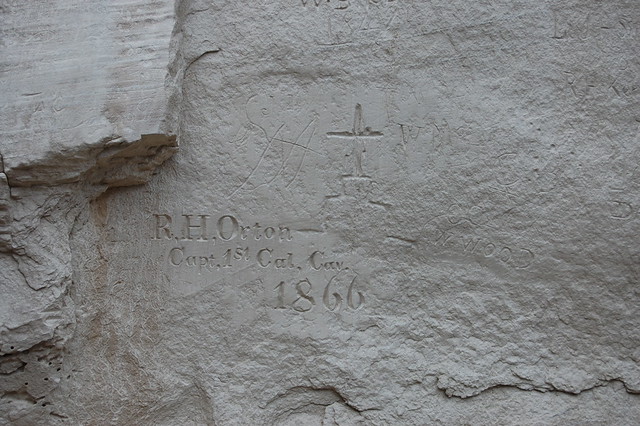 …it’s just pretty cool to see how many people felt the need to leave their mark.  Click on the below photo to get a better sense of just how many inscriptions are on this big rock housing an oasis and proving a perfect stopping point. 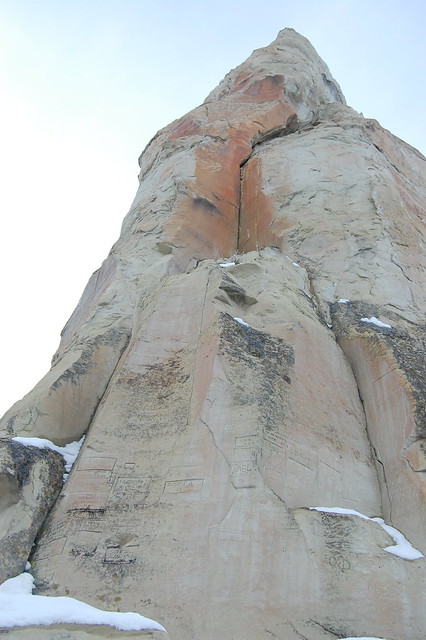 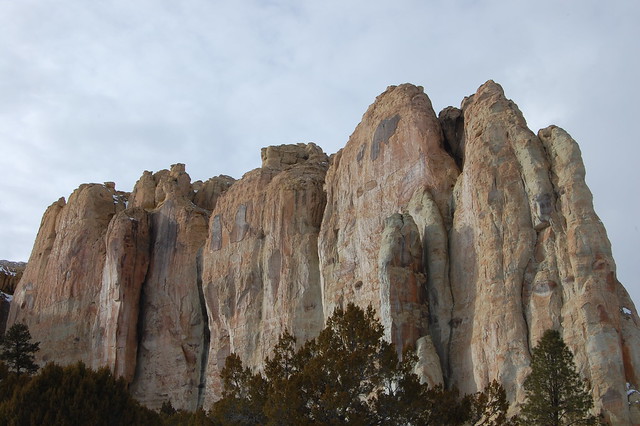 Luckily for me, the weather cooperated a bit, from a steady snow to the sun breaking through the clouds. This was definitely the trend of my trip.  It may not look like much in the photos, but this was one of the coolest things I saw.  It felt good to get a chance to go off the beaten path (you know, the Interstate), reliant on my own schedule and whims.  After I finished my tour (unfortunately the snow prohibited a longer hike, boo!), I headed back to my car, where a nice man stopped to chat with me after spotting my California plates.  As a man with many daughters, he felt the need to give me some words of wisdom about Albuquerque, namely where the young people hung out and where to find vegetarian food.  New Mexicans are nice like that.

With about 1.5 hours remaining in my trip, I continued on Route 53 and passed through El Malpaís National Monument.  El Malpaís is actually jointly managed by the National Park Service and the state and local governments, just depending on what section you’re passing through.  The name means “bad land,” and it refers to the volcanic landscape; yes, volcanic rock in New Mexico.  I had to check it out.  You’re allowed to hike in the area, but it’s treacherous hiking, completely deserted, and I was not prepared to get myself into any trouble.  However, I did manage to get some neat pictures of the black rock peeking out from the snow. 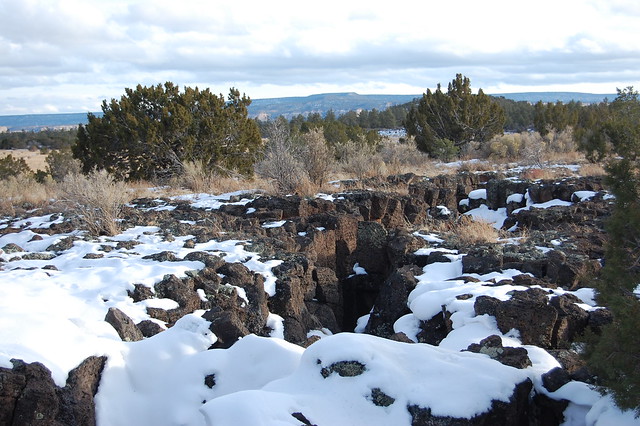 After hopping around a bit on the volcanic rock, in the middle of nowhere, with no one around, I got back on the road.  It was lovely, but hard to capture from the driver’s seat. 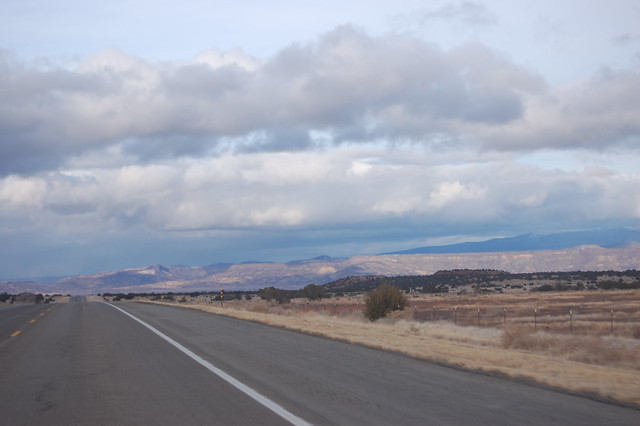 My last stop before Albuquerque was a turnout overlooking a pueblo.  It is illegal to take pictures inside the pueblos, so even though I passed through a few, this is the only picture I have showing the landscape of the areas surrounding Albuquerque.  As I considered going to grad school in ABQ, it was neat for me to see these sights I would have gotten used to. 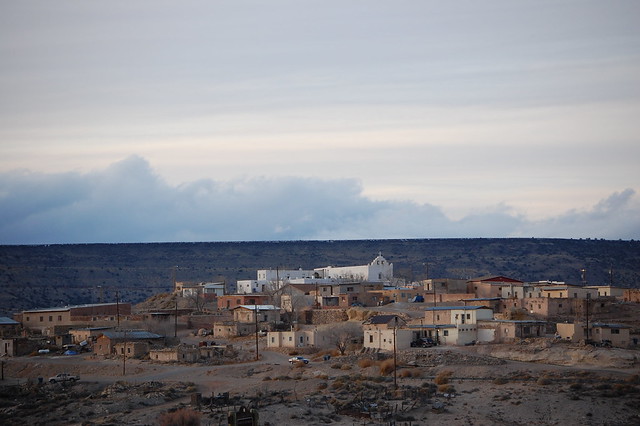 Approaching the city, suddenly it felt like southern California again, a maze of freeways and highways connecting you to various neighborhoods of Albuquerque.  I checked into my hostel, which was completely deserted with only two or so other guests, and immediately knew I wanted to stay in the other local hostel the next night.  Because the hostel was located in a weird area between Old Town and downtown, it was the first time I was particularly paranoid about the safety of my car and belongings.  Luckily my (empty) dorm room overlooked the hostel’s parking lot so I could check on everything. I tolerated the old, worn-in hostel for one night and went to sleep early in order to explore Albuquerque as much as I could the next day.