When planning my cross-country trip, I knew I had to stop in Nashville and gave myself two nights to explore and get a feel for the city. During the great grad school decision-making process of 2006, I agonized over whether to move to Nashville, San Diego, or Albuquerque. My brother suggested visiting Nashville before deciding, but how could this New York City girl (of days past, sadly) move to the south? It just didn’t seem possible, and I didn’t want to spend money on airfare. However, after visiting Nashville, 3.5 years later, I almost feel that I made a mistake. I loved Nashville. And here’s why!

After a 10 hour drive from Oklahoma City to Nashville, I arrived at the Music City Hostel, exhausted and hungry. Music City Hostel is a far busier, friendlier hostel, which is due in part to the nature of Nashville, bringing musicians and party lovers to check it out, and also to the fact that a number of people are actually living on the premises, most trying to break into the music industry. The hostel is a converted apartment complex, with safe parking in the back, and bunk beds in every available room, including the kitchens and living rooms. But instead of staying in their units, people congregate in the main one with the real kitchen, tv, computers, laundry, etc, and everyone was incredibly friendly and helpful. I got a great recommendation for Cafe Coco, where I was able to find vegetarian food without going too far (apparently this cafe/music spot is a must visit). I also went to a seriously impressive wine/liquor store, Midtown Wine and Spirits, which I came across accidentally because I went the wrong direction in my tiredness!

As soon as I walked back in the door with my veggie chili, salad, and wine to unwind, the other guests informed me that the cab was on its way and I was coming out with them. I brought my conveniently-packed chili along with me, dropped everything else off, and headed out to the bars with a group of travelers from Canada, the Netherlands, Scotland, Australia, the US, and elsewhere. We barhopped around Paradise Park, Robert’s, Big Shotz, and Tootsie’s, listening to and dancing to country music, trying out jello shots in giant syringes, and chatting and enjoying the company of new friends. I would never have thought I would dance and dance and dance to country music, but the energy of these bands and these packed bars, even midweek, was infectious. Robert’s in particular, with its cowboy boots on the wall, and its delicious fried pickles, was a standout. 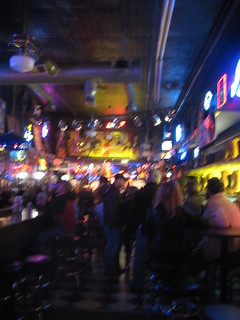 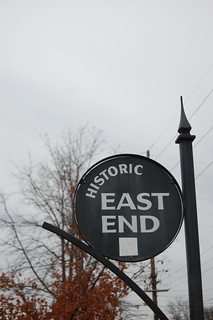 I arrived home very late at night and got a serious night’s sleep. I needed it after all all that driving and dancing. 🙂 It worked out well, because as I was getting ready to head out into the dreary, rainy day, my dormmate came home from a job interview and we headed to the East End to explore together. East Nashville is apparently quite the interesting, up-and-coming neighborhood, and I enjoyed all the quirky shops we stopped in at. We had lunch at Calypso Cafe, which I’d found out about in a search for vegetarian restaurants. The food was Caribbean-fusion, with greens and beans and coconut and cornbread, and was tasty, though not my favorite meal during my trip. 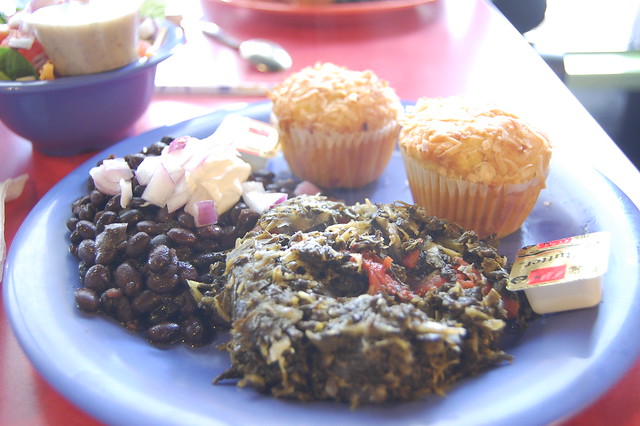 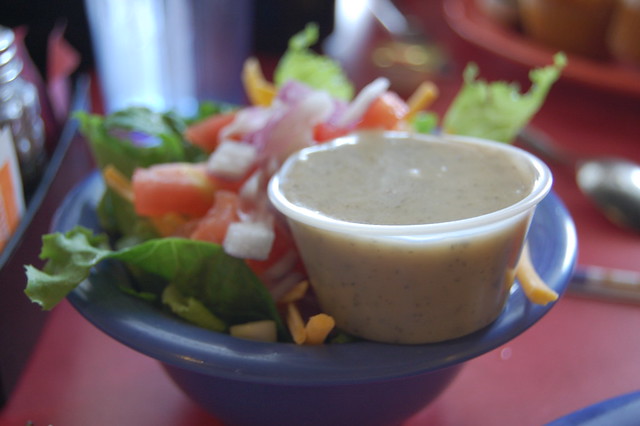 Afterwards, we wandered around the Five Points area on foot. My favorite stop was the Green Wagon, an adorable eco-friendly store located in a cute house with organic and natural products, unique reusable bags and goods, locally made art, jewelry, and chocolate, and an extremely friendly woman working there who gave us good pointers and showed that Nashville charm. If I hadn’t been so low on funds, I would have bought an amazing shopping bag made of repurposed materials, but I did manage to find something I totally love: a locally-produced lotion (or precious ointment, as the label says) made with all natural ingredients. Something like that is a perfect souvenir, because not only did it soothe my chapped hands, but I continue to use it and remember the cute little shop. I also picked up a vintage purse, and my hostel buddy got a great top.

Next, we went to two vintage shops (where I almost bought a pair of blue cowboy boots, but they just didn’t fit right), followed by a requisite stop in the Pied Piper Creamery. The owner of Pied Piper was super nice and entertained my questions about her business. She had some fun flavors, but more importantly, she had a welcoming environment for kids and adults alike. The ice cream shop shares its cute house with Great Stuff, a gift shop with some neat things, including a hat which I couldn’t resist. 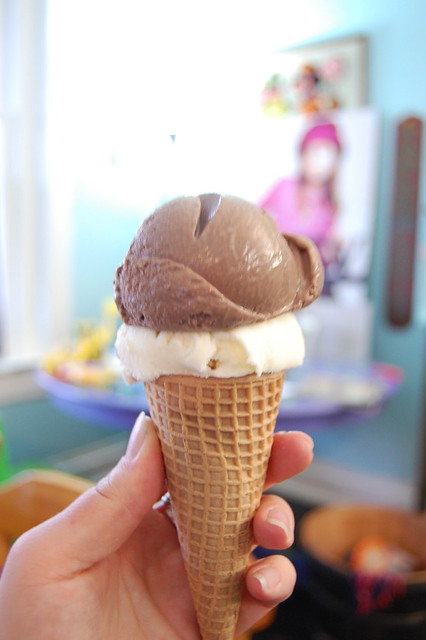 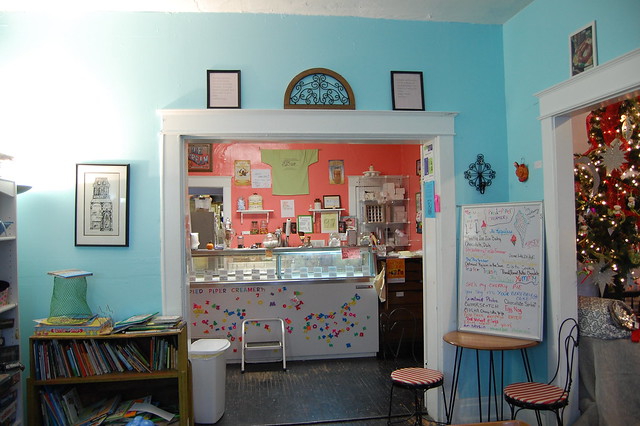 After East Nashville, we figured we had to do something stereotypically Nashville, and went to the Opryland Hotel. This place was totally an exercise in excess, all decked out for the holidays. It’s possible to get lost wandering around and seeing all the Christmas decorations. I imagine during other seasons this greenhouse is in bloom with gorgeous plants and flowers. 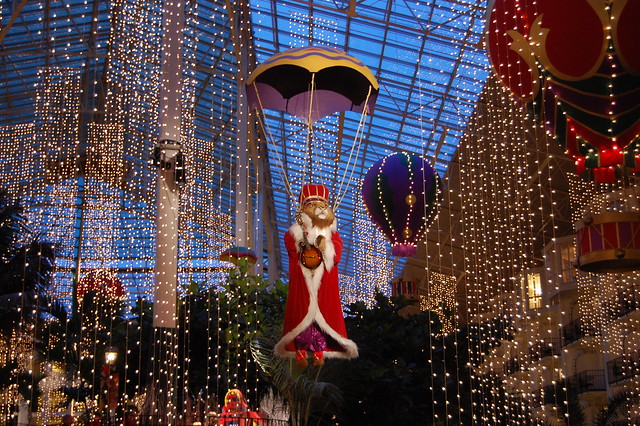 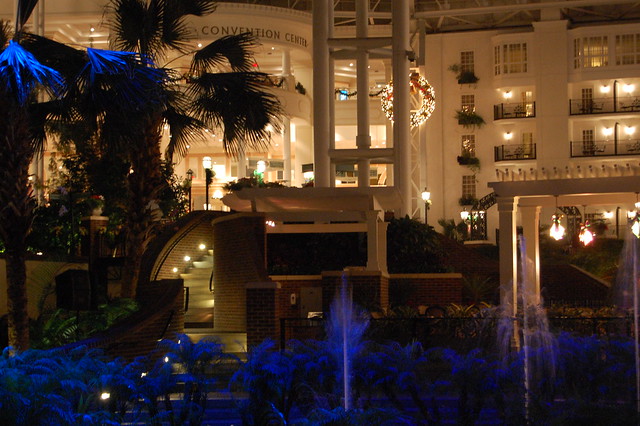 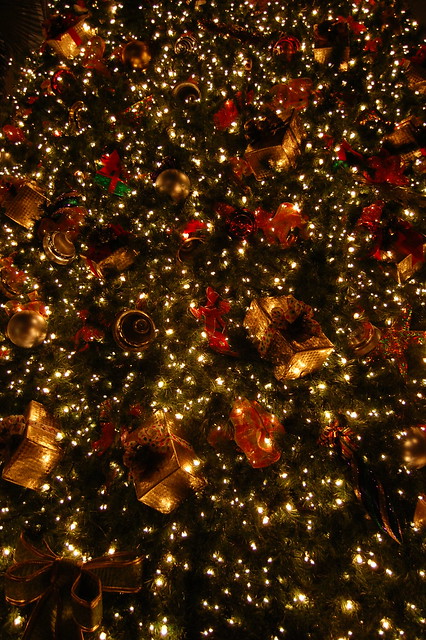 After a long day of wandering in the damp Nashville air, we headed back to the hostel to hang out and get ready for another night on the town. This night was even crazier than the one before. I got my own order of fried pickles for dinner (I know, it’s embarrassing but SO GOOD) at Robert’s, and we danced and danced to a fantastic band at The Stage on Broadway, who played a mix of more 90’s and 00’s pop with the odd rock/country hybrid song tossed in. Good times.

Just before I left for the bars, I got a call from my parents, who saw on the news that a major blizzard was heading to the Virginia/DC region, precisely where I was planning to travel the next day to meet up with my brother. My parents suggested heading north to avoid the storm, and though I was bummed to miss hanging out with my brother and seeing his law school (and honestly tempted to wait it out in Nashville), I took their advice and planned to drive north. I got up on a rainy day and headed out to begin the longest drive yet. Destination: Buffalo, New York.

Yes, my friends, it is possible to drive from Nashville, TN to Buffalo, NY in one day. I crossed more state lines that day than any other, drove in pouring rain (but was comforted by the fact that people actually knew how to drive in the rain, unlike in San Diego), and passed through Louisville, KY, Cincinnati, OH, Cleveland, OH, Erie, PA, before finally, finally, finally making it to Buffalo, NY. I chose Buffalo because I wanted to cover as much ground as possible, and it was the only place where I could find a semi-reasonably priced hotel within an 8-12 hour drive of Nashville. That said, it was a very long, exhausting drive and I only made it through because I knew the end was in sight! Leaving Ohio and still having two hours left to drive was disheartening, but, again, I made it. 🙂

I actually thought I’d try to go to Niagara Falls the next morning before heading on my way, but as it turns out, the storm was coming up the east coast quickly and I decided to play beat the storm to New Hampshire instead. And I won (snow didn’t even hit NH, but I probably would have had to contend with it driving through Massachusetts any later than I did). The drive from Buffalo to NH was relatively pleasant, and even though I paid a hefty toll to drive I-90, the convenient rest stops along the way were worth it.

And just like that, I pulled into my parents’ driveway at 6:30 on December 19th, after a 3,795 mile journey. I absolutely loved the entire trip, even the days where I did nothing but drive through uninteresting landscapes and places I didn’t get to explore. To mentally approach a trip of this size, I just had to take it in pieces, which is really the best way to approach life in general. There’s a reason that I know how to say step by step, little by little in many different languages. I have a newfound appreciation for some of the areas I’d never considered interesting before, especially those random stops where I got food or gas or tea and met a friendly person. I’m always interested in getting a broader perspective than the beaten path, but flying around the US has never given me too much of a chance. Now I’ve got plenty of ideas for new road trips. 🙂

Thanks to those of you that read through this whole recap, and hopefully it inspired you to get on the road!