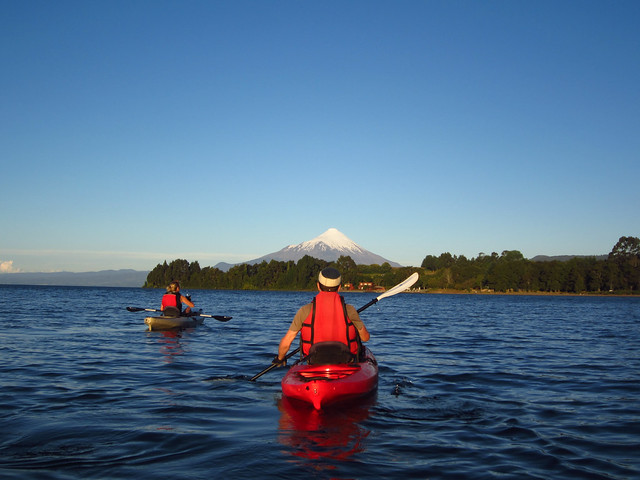 One of the best things about travel is getting to experience activities that are outside your normal routine. As my love for biking is clearly established, I do my best to find a way to get on a bike wherever I travel. I also love horseback riding and trekking, so the first thing I do when I get somewhere new is scope out my options. 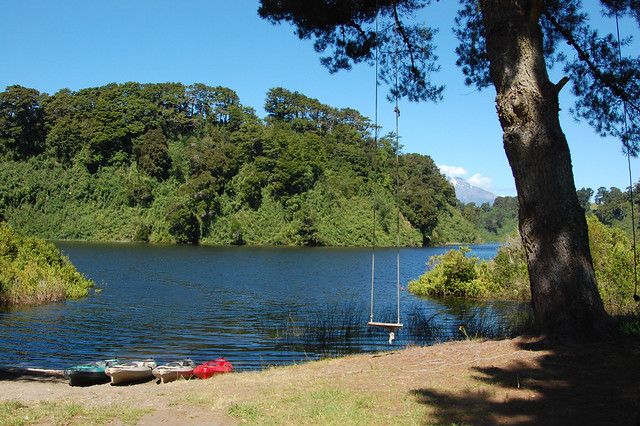 When I arrived in Puerto Varas, Pierre, the owner of the hostel where I was staying, gave me a rundown of all of the tours and activities around the area. I was most interested in trekking, rafting, and horseback riding, since I hadn’t gotten around to doing any of these things in Pucón. Unfortunately, this was not to be. Pierre warned me that the hiking paths in the national park would be infested with crazy seasonal bugs for the next month, and this was no joke – all the hostel guests who went anyway said it was unbearable. (I later ran into the same bugs in Valdivia!) 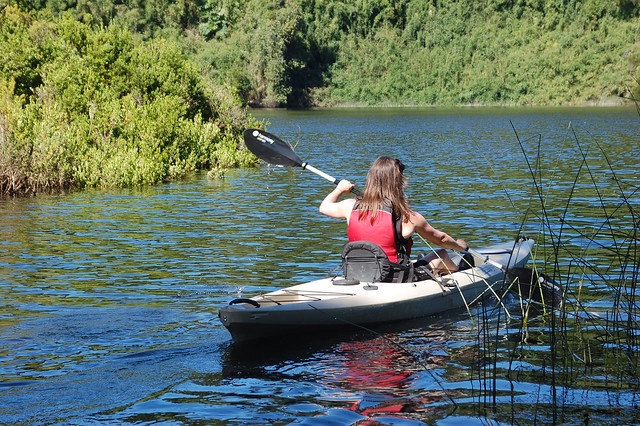 Getting Started in the Kayak in a Lagoon near Puerto Varas, Chile

With regards to horseback riding, the best options are in the nearby valley of Cochamó, but these excursions require multiple days and I didn’t have enough time for that on this trip (it definitely remains on my wish list for when I return and head to Chilean Patagonia!). As it turns out, rafting is not a particularly popular option either; the Río Petrohue lacks the appeal of the Río Trancura near Pucón. Instead, most people seeking time out on the water opt for kayaking. 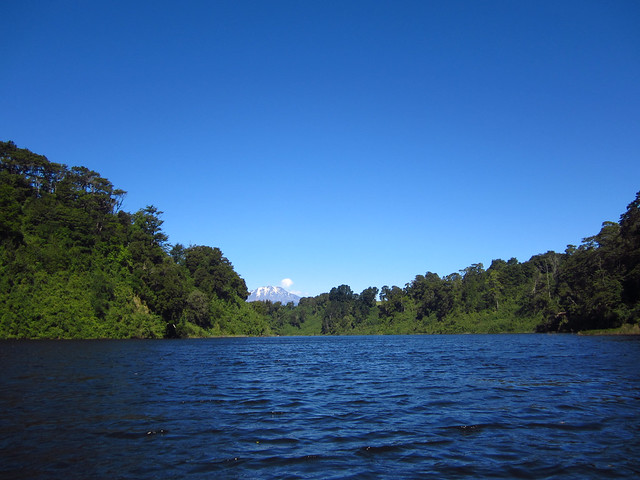 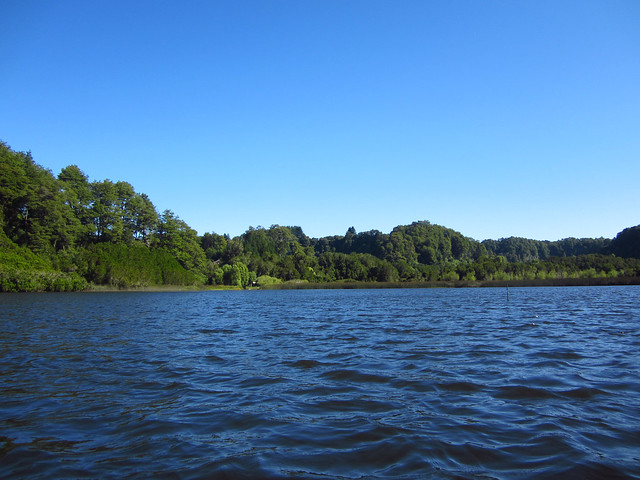 Excitedly, the hostel owner, Pierre, explained how amazing it is to be out in a kayak on your own. Knowing that I practice yoga and meditation, he said I would fall in love with kayaking because it would just be me out there, paddling, enjoying the natural surroundings, and concentrating on moving, totally in the moment. This reminded me of my revelations out on the bike in the farmlands between Pucón and Caburgua. I was curious. I was definitely in. 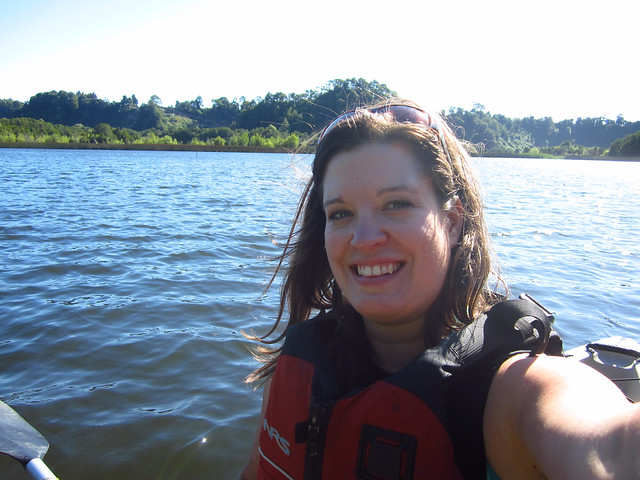 Posing in the Kayak in a Lagoon near Puerto Varas, Chile

There are several options for kayaking around Puerto Varas; many agencies offer kayaking in the bay of Lago Llanquihue. If you’re looking for something different, Hostel Margouya Patagonia offers their own special kayaking excursion that starts off in a quiet lagoon, which you see in the photos above. This gives beginners like me a chance to get comfortable with the rhythm of paddling while navigating through calm waters. 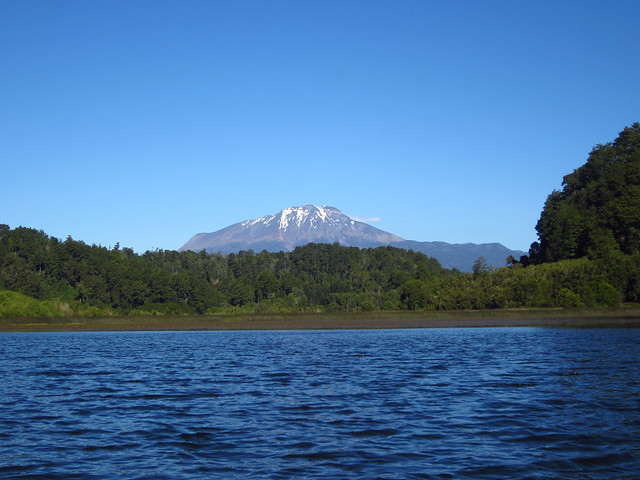 After paddling through the calm lagoon and moving farther away from the shore, we headed through a narrow path through lush foliage growing in the water, passing through trees overhead and appreciating the biodiversity of the lakes region. We came out to another expanse of blue water, a hidden lagoon in the middle of green forests, with amazing views of Volcán Calbuco to boot. Our guide gave us time to paddle around this secluded area, taking in the moment of being somewhere totally peaceful. That was it – I was hooked. 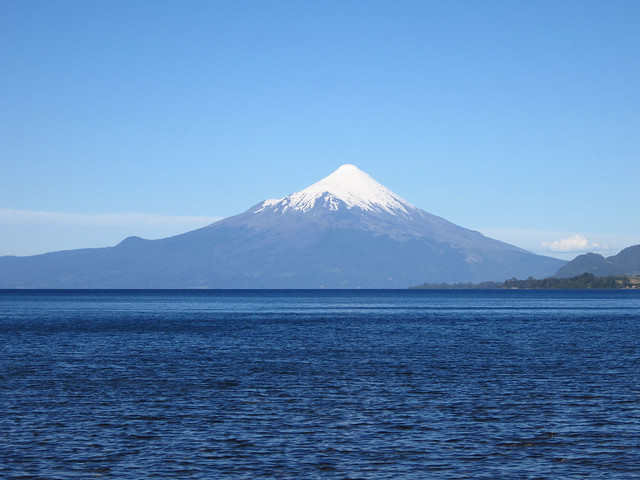 Views of Volcán Osorno from a Kayak in Lago Llanquihue

After enjoying the lagoon, we headed back towards where we had started, but taking a new path, following a channel that fed into Lago Llanquihue. Our guide warned us that there were some strong currents in the giant lake, so to be sure to follow his lead. I was enjoying the activity of moving myself around using the strength of my arms rather than relying on my legs as in biking, and as we moved into Lago Llanquihue we had the opportunity to paddle faster and appreciate the freedom of being in a kayak. And I definitely couldn’t complain about these views. A little point and shoot camera can’t capture the majesty of being in the middle of the wide expanse of blue lake with this giant volcano towering above. Bliss on the water! 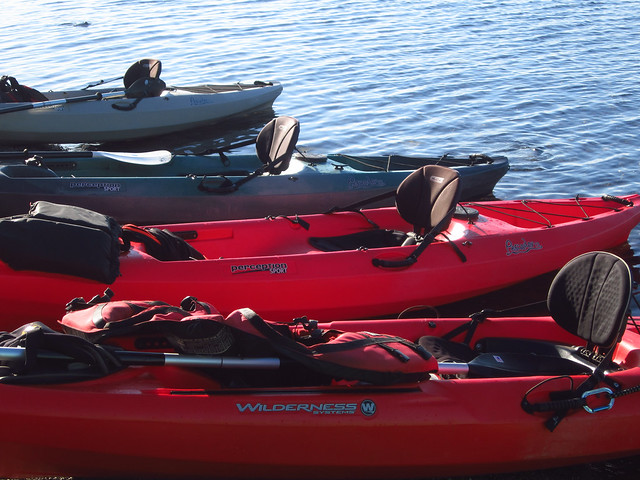 We paddled towards a quiet beach on the shores of Lago Llanquihue, where our guide had a treat in store for us – afternoon tea and coffee with cookies to help us recharge our batteries. We enjoyed being on dry land for a little while, and the brave went swimming in the chilly waters! At this point, it was late afternoon and the sun was beginning to set behind us, illuminating the area with a beautiful golden glow. (You can see the light on our backs in the photo at the top of the post.) 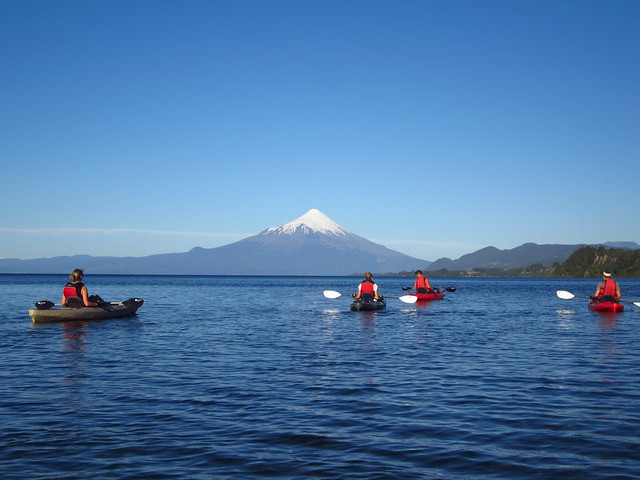 Kayaking in Lago Llanquihue, with Volcán Osorno in View

We got back in our kayaks and headed towards Volcán Osorno, staying close together but each one of us in our own worlds, enjoying the moment. It was really special to see how the other travelers were also just appreciating the fresh air and warm sunshine on our backs. I definitely understood why people get addicted to kayaking, and will definitely be seeking out more opportunities to explore the area in one. 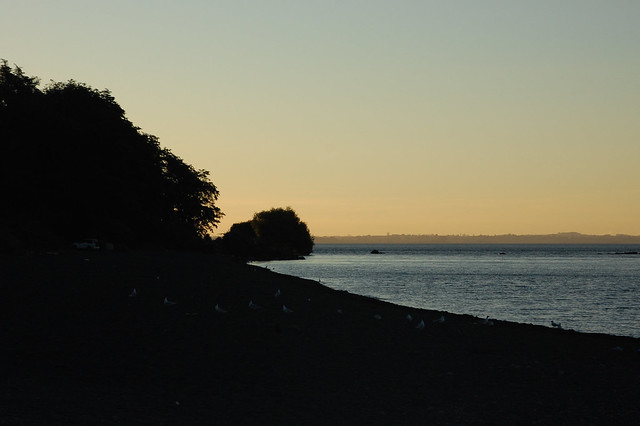 As we paddled towards our final destination, another beach on Lago Llanquihue, I kept looking behind me to watch the sunset. When I got to the shore, I grabbed my D40 from the waiting vehicle and started snapping pictures of the golden glow over the blue horizon. 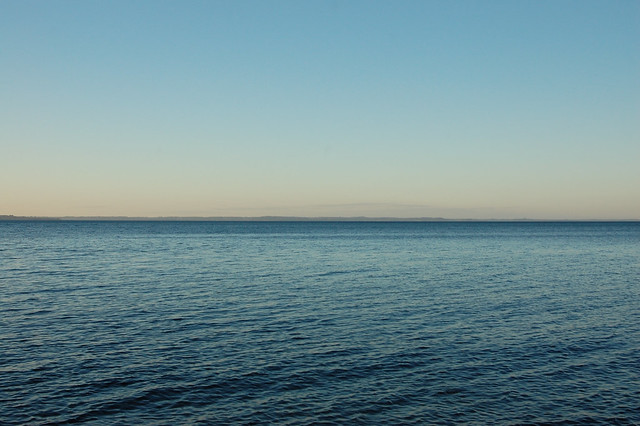 As I discovered during my bike ride along another stretch of Lago Llanquihue, the lake is enormous, so much bigger that it appears from the city. Looking out into Lago Llanquihue, there was really nothing to see except for blue. It felt like the endless expanses of the Pacific, rather than a lake. 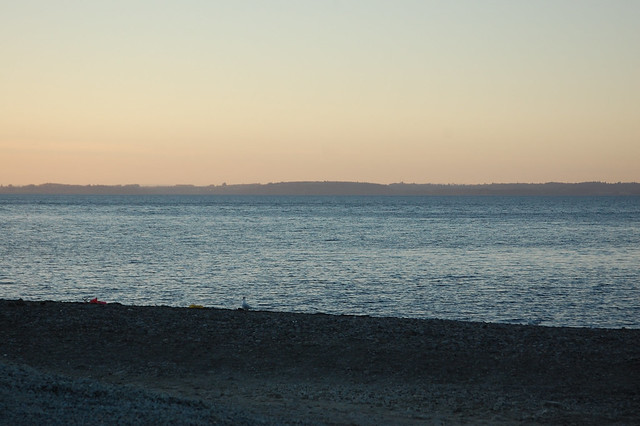 With such clear, blue, cloudless skies, the sunset over the lake was quite simple, much different than the blue sunset I’d spotted from Puerto Varas upon arrival. 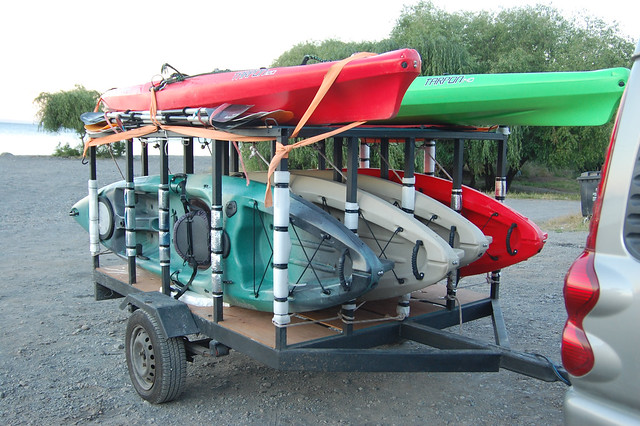 Kayaks Ready to Head Back to Puerto Varas

Our guides loaded the kayaks back onto the trailer as we put on more layers to keep the chill off us after so much time out on the water. We piled in the car and enjoyed a pleasant, happy ride back to Puerto Varas, all energized and chatty after such a fun afternoon. 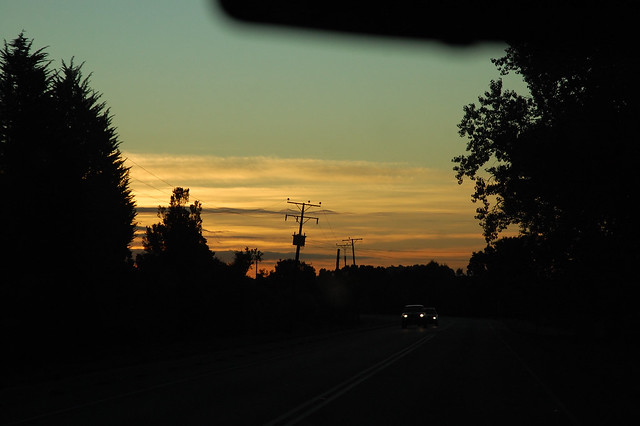 Sunset on the Highway Towards Puerto Varas, Chile

We were rewarded with more views of the beautiful sunset as we drove back to Puerto Varas. My beloved clouds had appeared in the direction of Puerto Varas and captured the sun’s golden rays as it disappeared from view.

After this kayaking adventure on Lago Llanquihue, I am definitely interested in more kayaking trips. Where I can’t go on foot or on bike, I’ll try to go on kayak. I’m looking forward to trying out my skills again on another trip. This was a perfect way to end my stay in Puerto Varas – well, that and the New Year’s Eve celebration the next night. 😉

Recommendations for Kayaking on Lago Llanquihue, near Puerto Varas, Chile: