While Arica, Chile is known primarily for its surfing, it is also a base for exploring the Chilean highlands which border Bolivia.  Most guidebooks advise taking a three day tour to explore Parque Nacional Lauca, but solo travelers usually have to adapt their plans to demand, especially in the off-season.  A one-day tour happened to be leaving the morning after I arrived in Chile, so I quickly decided to go along so that I wouldn’t miss my opportunity to see this national park. 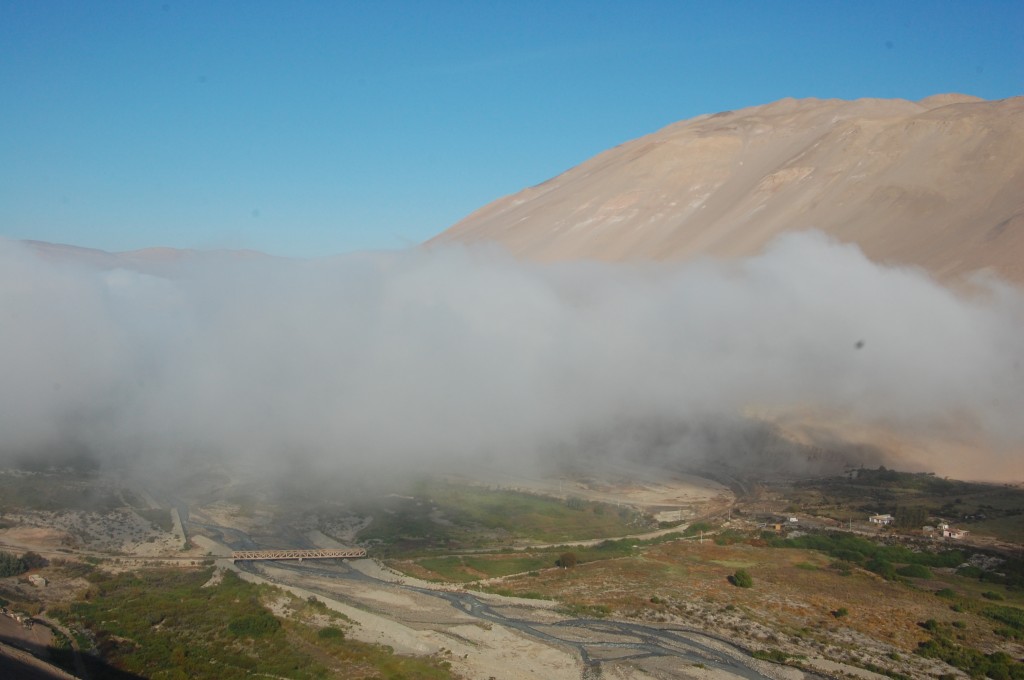 In the one day tour to Parque Nacional Lauca, pleasantly run by Turismo Lauca, we left the sea-level city of Arica and began the ascent to the highlands.  On the way, we saw many giant geoglyphs carved into the mountains and had the opportunity to buy coca leaves to help with the big change in altitude over the course of the day.  It was cloudy and cold leaving Arica and the lower elevations, but as we gained altitude we rose above the cloud cover, known as neblina.  The view of the clear blue skies from above the neblina was fascinating! 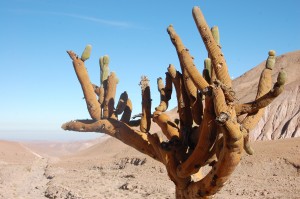 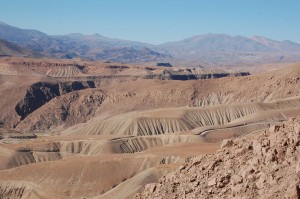 At these lower altitudes, the landscape is desert-like, with brown as far as the eye can see and these interesting plants that resemble cacti.  Hidden among these hills are mines, as one of Chile’s main industries is mining. 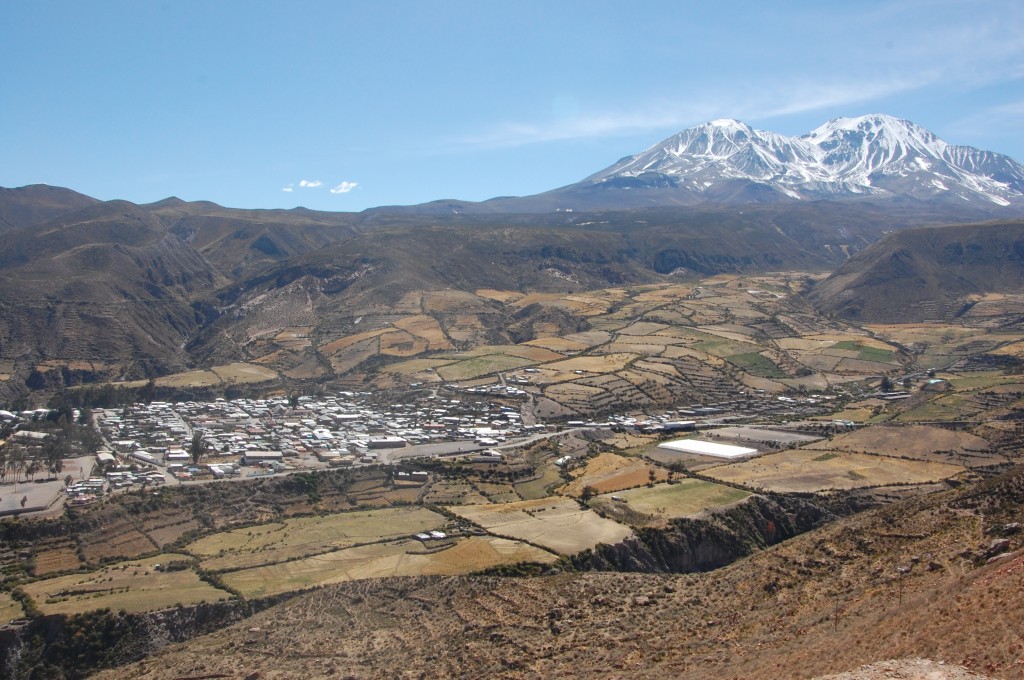 View from Above Putre, Chile

To break up the climb, we stopped for a Chilean breakfast at a roadside restaurant.  Finally, we reached the viewpoint above Putre, where we could see the town that serves as a base for many travelers exploring the region.  This also gave us our first view of the beautiful snow-covered volcanoes in the distance. 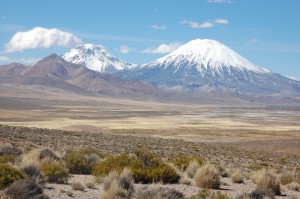 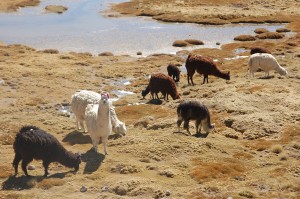 We stopped a few times to admire the landscape and the animals we encountered along our way.  Many of my companions on the tour were Chileans escaping the capital city of Santiago, where you rarely see snow and ice, so it was fun for us to get out and wander around. 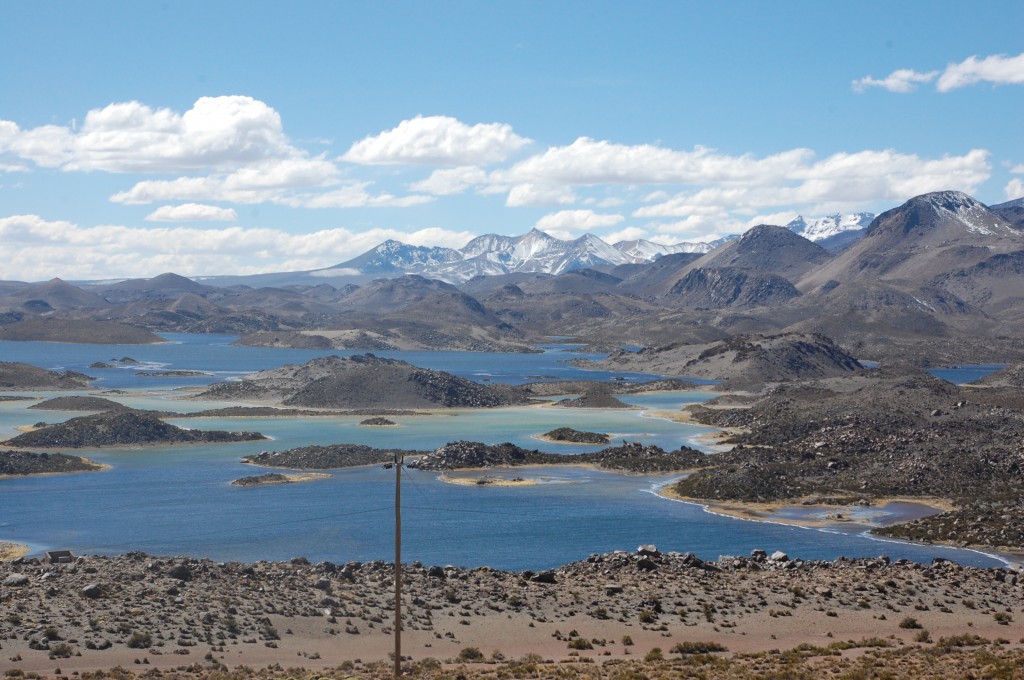 Our next stop was Lagunas Cotacotani, a gorgeous collections of deep blue lakes dotted with rocky hills.  I would have loved to get closer or even farther away to get a panoramic view, because these lakes were hard to believe.  We all joked about how the electrical poles ruined any landscape photos, but you have to admire the feat of bringing electricity to this distant part of Chile! 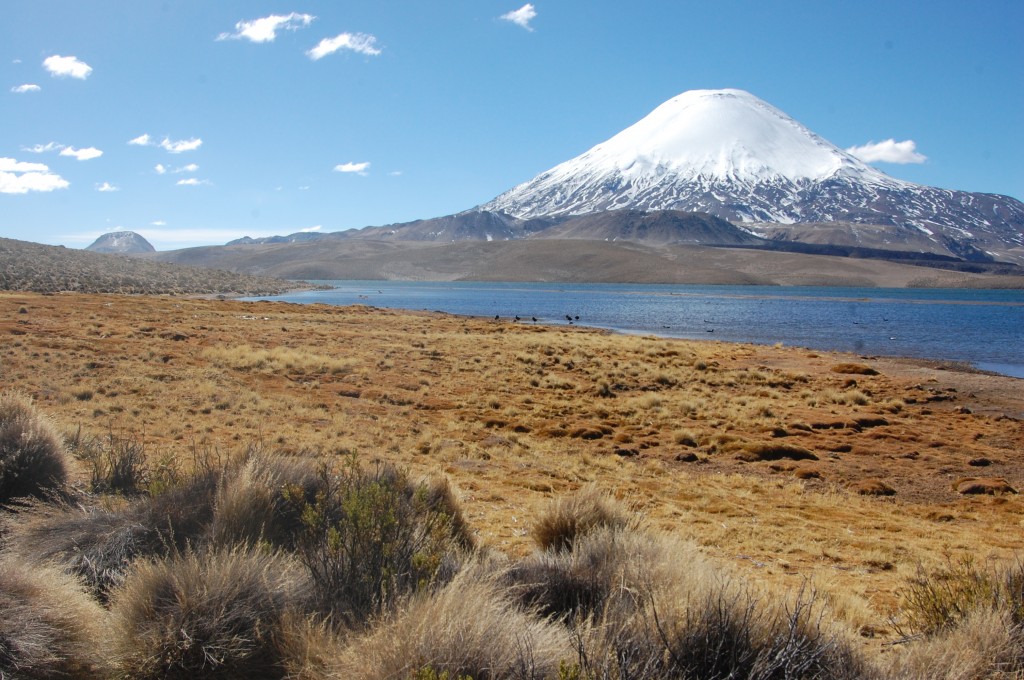 From there, we moved on to Laguna Chungará, another richly hued blue lake surrounded by the distinctive altiplano (highland) landscape and dominated by Volcán Parinacota with its bright white peak.  After wandering around and appreciating the views, we headed to the small village of Parinacota. 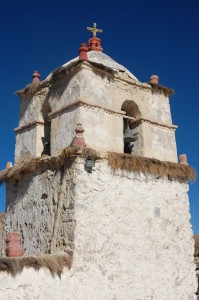 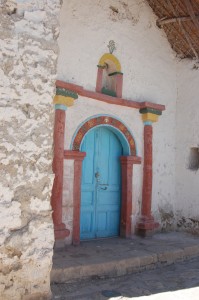 Parinacota is known for its traditional church.  This was our chance to browse for souvenirs and I picked up a postcard to send to my mom.  We also sat for a bit at one of the little shops that doubled as a cafe.  It hasn’t changed in years, if this photo proves anything! 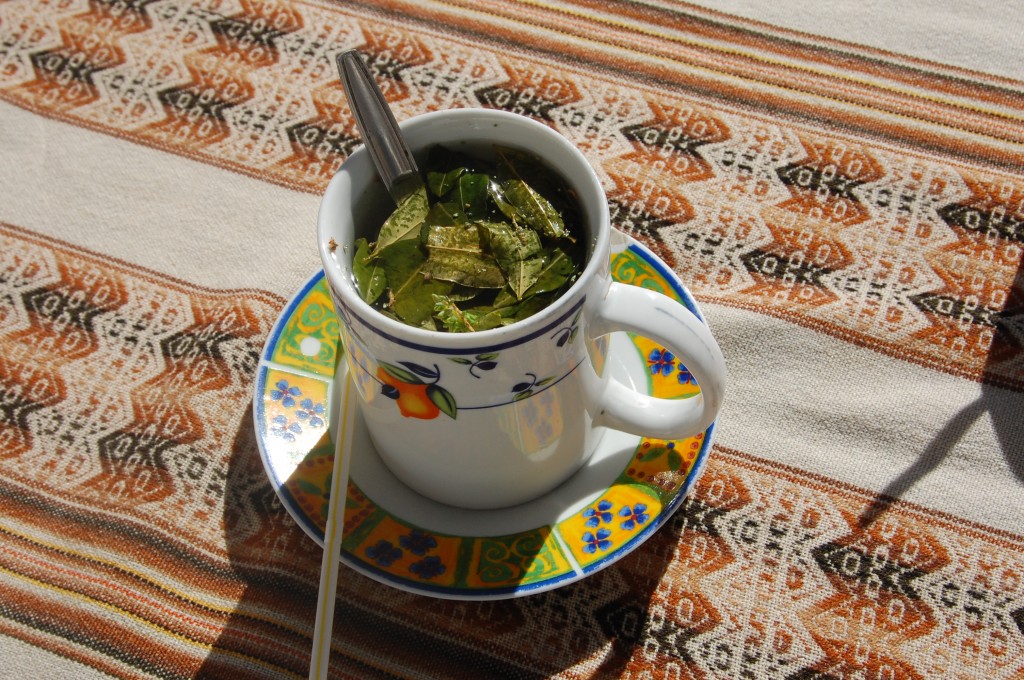 One of the major differences I immediately noticed between Peru and Chile was the attention to small details and the emphasis on presentation.  While food and drinks in Peru are often served on/in plastic, Chileans always use pretty ceramic cups with saucers, even in a tiny village like this one.  I loved this infusion of coca leaves with chachacoma, a local herb with a minty flavor.  Both herbs help with altitude sickness, but also taste delicious! 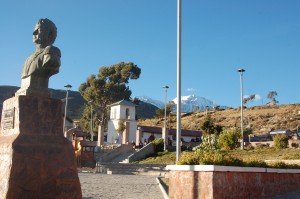 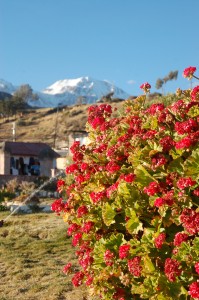 After leaving Parinacota, we headed down to Putre for a late lunch, retracing our steps and appreciating the lakes and volcanoes once again.  Putre looked like your typical Andean town with men and women in traditional dress, but also had a number of fancy restaurants and facilities for tourists.  I would have loved to spend a night there and to wake up to see the mountains which surrounded the town.

After leaving Putre, we had the long drive back to Arica.  Luckily, we saw this beautiful sunset as we headed through the windy roads through the mountains.  The altitude changes led to most of us nodding off along the way! 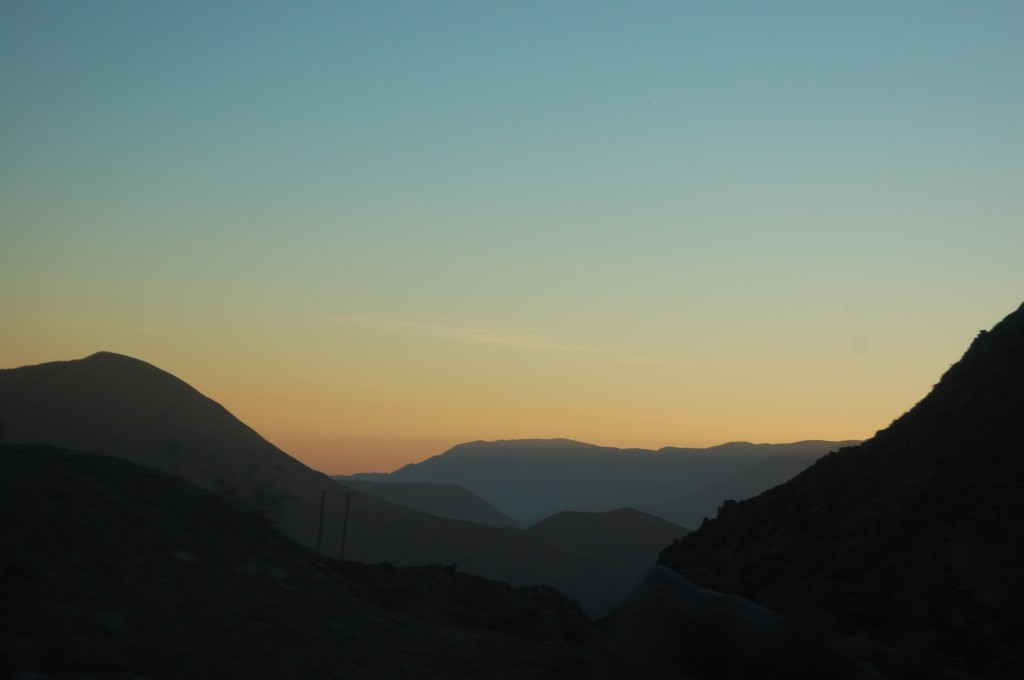 As you can see, this was a beautiful way to start my backpacking adventure.  I remember sitting in the bus and having it hit me that I was finally living my dream, that my responsibilities were finished for the time being, and that I could just enjoy each of these moments without having to worry about anything or rush anywhere.  It was also fun to get to know my tour companions, including some Japanese travelers, a Spaniard working in southern Chile, three animated young Chilean women making the most out of their week’s vacation, and two older Chilean women who had been friends for a long time.  Seeing these sites is absolutely amazing, but getting to know people from all kinds of backgrounds is part of the magic of travel. 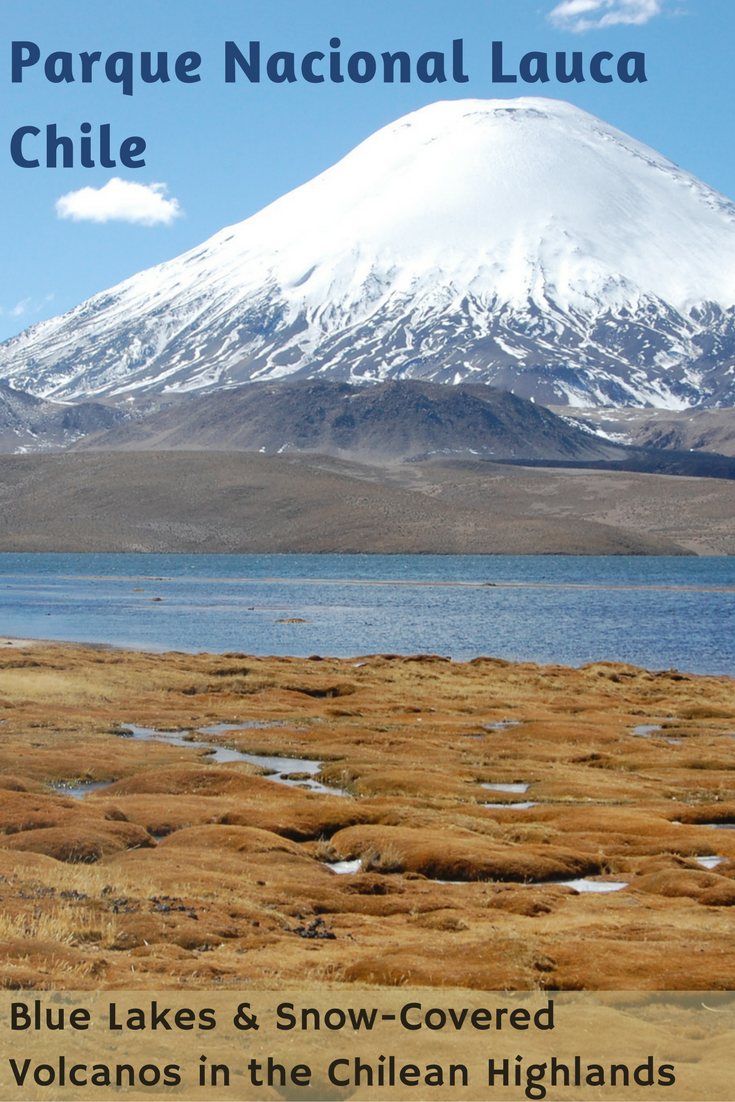 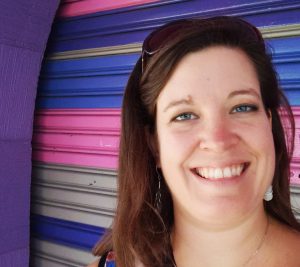