Years ago I decided that I had to visit Easter Island, which is known in Spanish as Isla de Pascua, but is called Rapa Nui by its residents and everyone who visits and grows to love the island.  I’m sure I saw some amazing pictures of its moai and was fascinated by the remote Pacific location and mysterious history, and visiting the island ended up on my life list, that ever-changing and expanding list of dream travel destinations and personal goals.

After I’d made the big decision to leave life in the U.S. behind to volunteer in Peru, I happened to see a flight deal from Lima to Rapa Nui, a deal that made this dream affordable. I had a nice chunk of time between the end of the our programs for 2012 and my flight back to the U.S. for Christmas, and the flight deal would give me just over a week on the island.  You’d think that I would have booked my ticket immediately, but I debated the decision for a few months, as there are so many other places I want to see in Peru and its neighboring countries.  I suspect it also just seemed far too easy to fulfill my dream.  I finally pulled the trigger in September and booked my trip.  I know now that it was meant to be; the serendipity throughout my entire trip is undeniable.

By the time December hit, I’d been living in Huaycán for over five months.  The end of the year was hectic and I was focused on finishing it as strongly as possible and setting myself up for a better 2013.  I also had to pack the majority of my belongings in my backpack once again and store the stuff I didn’t need for my return in January.  I read a little about Rapa Nui and marked some places as “must-sees,” but as my departure date approached, I was anything but over-prepared for the trip.  That’s how I travel; I prepare myself with a little background knowledge, but leave the rest open so my destination can surprise me with its story and my itinerary can fill day by day as I learn more.  It works for me.

My flight on December 12 was scheduled for 1:20AM; it was supposed to be an overnight flight, which gave me the whole previous day to transition from hard-working Kim to travel Kim.  Late in the afternoon the day before my departure, I received a message that the flight had been delayed, and was now leaving at 6:45AM, which meant I’d be arriving to the Lima airport in the middle of the night.  Delays are very common on flights to and from Rapa Nui; the island is very small, the runway, the whole length of the island, and weather issues anywhere on the flight route can affect travel plans.  As it turns out, when I finally boarded my plane in Lima, there was another plane on the island and we had to wait until it left before we could even take off!

Waiting in the boarding area was fascinating.  There were a lot of people traveling by themselves, like me.  Some people were very obviously backpackers on a round-the-world trip; others were couples or families.  Many people had spent the night in the airport since they hadn’t received advance notice of the delay.  When it was time to board, we patiently and quietly waited in line, and many people pulled out their smartphones to snap pictures of the departure gate screen, with IPC (Isla de Pascua, Chile) as the destination.  I wish I’d done it too!  It made me smile because I knew other people felt as I did; this is a once-in-a-lifetime trip.

The flight from Lima to Rapa Nui is five hours, most of which I passed napping and trying to recover from my exhaustion of the past few days.  But as we began to descend to Easter Island, I was glued to the window, with my camera in my hand.  I didn’t know what to expect, but what I saw was breathtaking: 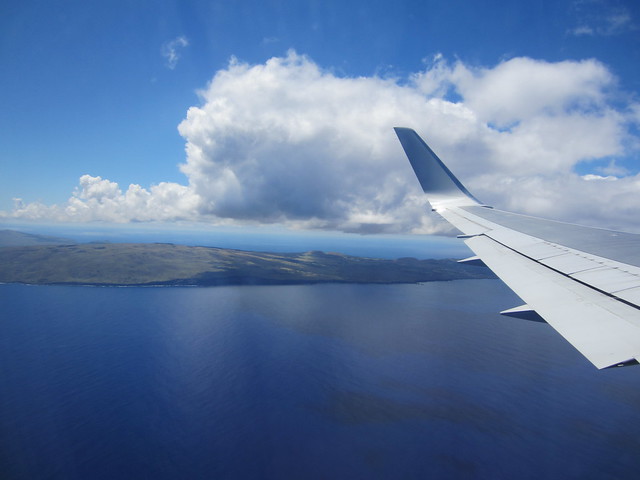 Blue water everywhere.  Yes, we were really in the middle of the Pacific Ocean, in one of the most isolated locations on Earth.  And my adventure was about to begin. 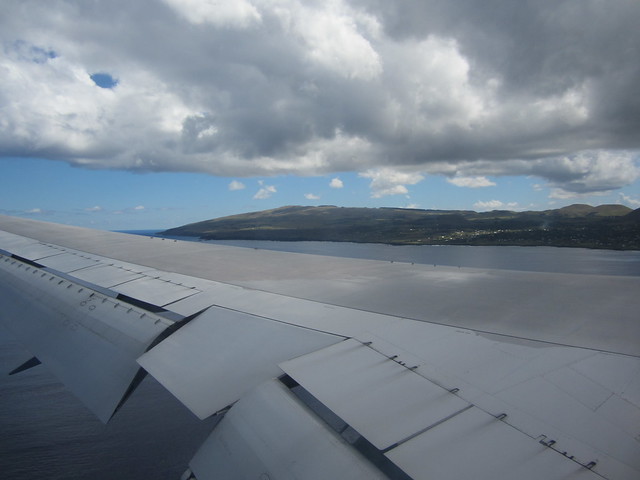