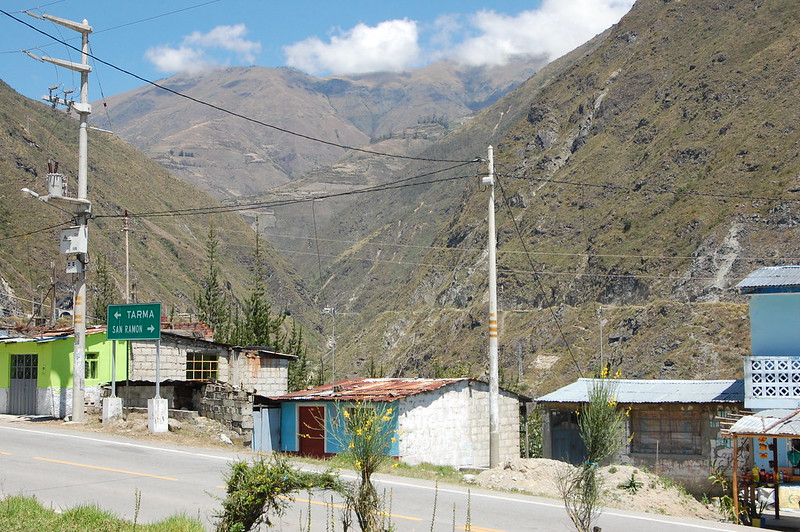 Even though Tarma is a pleasant enough city, filled with blooming flowers during much of the year, most visitors actually use Tarma as a base to explore different parts of the Junín region. I was no different; I wanted to make the most of my brief stay. Despite all the travel I’d already done in Peru, I had yet to visit the Amazon, not even the high jungle only a few hours away from Cuzco or Huánuco. For this reason, I opted to take the tour of the central jungle and get a sense for the cultural and climatic differences just a few hours away. 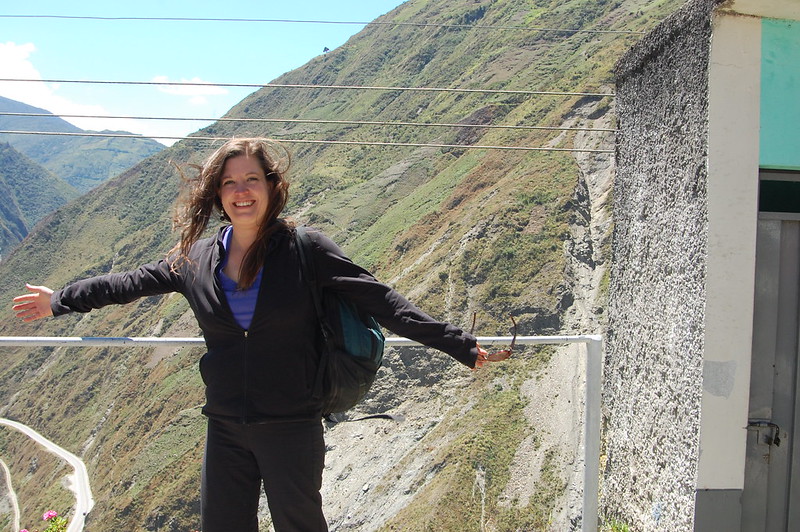 As it turns out, this was an excellent choice and one that helped mold my decision making as I moved onto northern Peru and Ecuador later in my travels. For one, heading into the jungle meant getting out of the cool, dry winter weather in the central Andes, even just for a couple of hours. Beyond that, descending into the Valle de Chanchamayo gave me a glimpse into yet another facet of Peru. 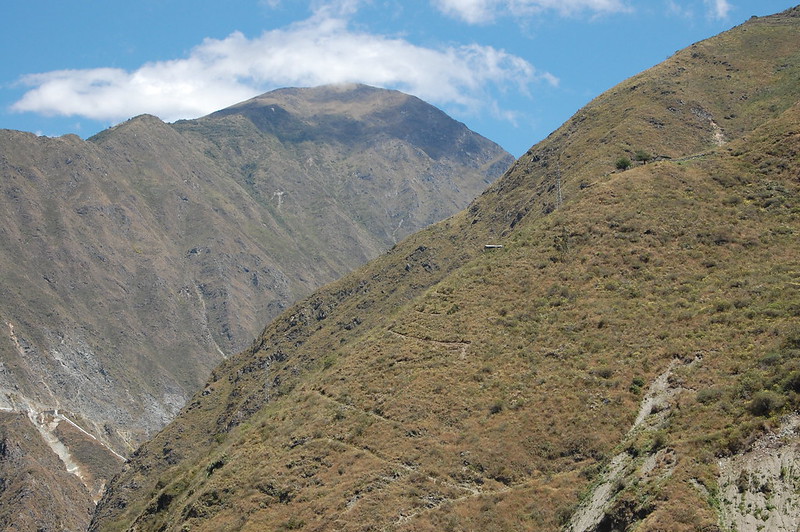 Our first stop on the tour was this crossroads you see in the photos above. Because of the way the mountain ridges curve and cross in the landscape, there is a surprisingly strong, powerful wind that rolls off the hills and is said to cleanse you. Naturally, this is an ideal time to take some pictures, but I have to admit I was more fascinated by the way the mountains had started to tower above us.

Nearby, there is a small stand selling artisan treats, including small batches of manjar blanco (milk caramel, otherwise known as dulce de leche) and preserves, which were delicious. 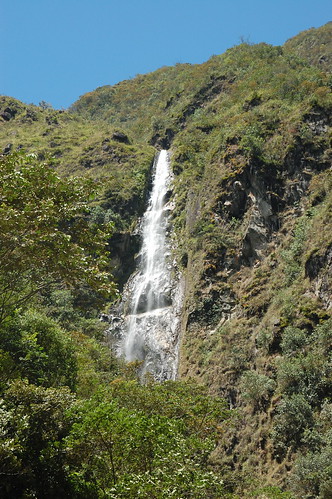 You know that you are starting to get into the more tropical climate as you begin to spot the waterfalls cascading off the hills all around you.

In quick succession, we saw the Cabello del Angel (Angel’s Hair) followed by the Ducha de Diablo (The Devil’s Shower), two waterfalls named for their appearance as well as their danger. 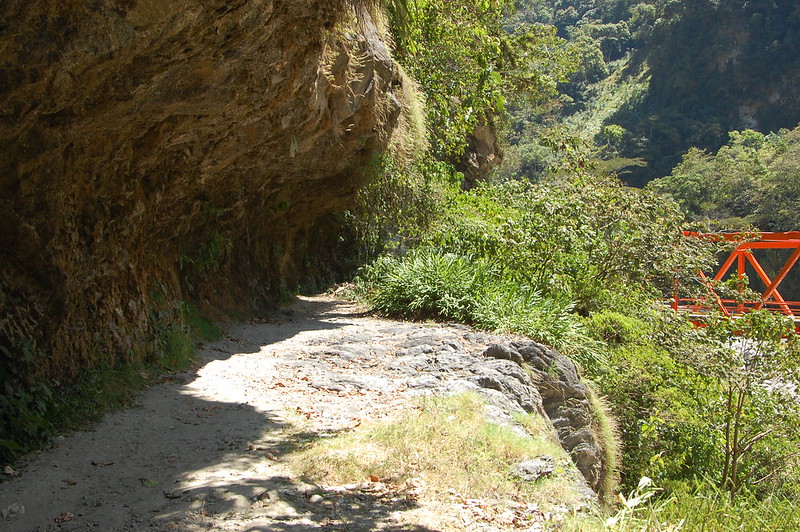 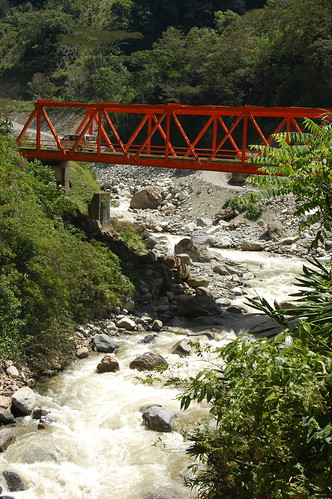 Soon, we had the opportunity to get out of the tour van and appreciate what used to be the highway in these parts, a narrow road carved along the rock walls of this particularly canyon, closely following the rushing river below.

This also gives you the opportunity to appreciate how modern construction has made life a little easier and transportation between the two regions much more efficient as well as safer! 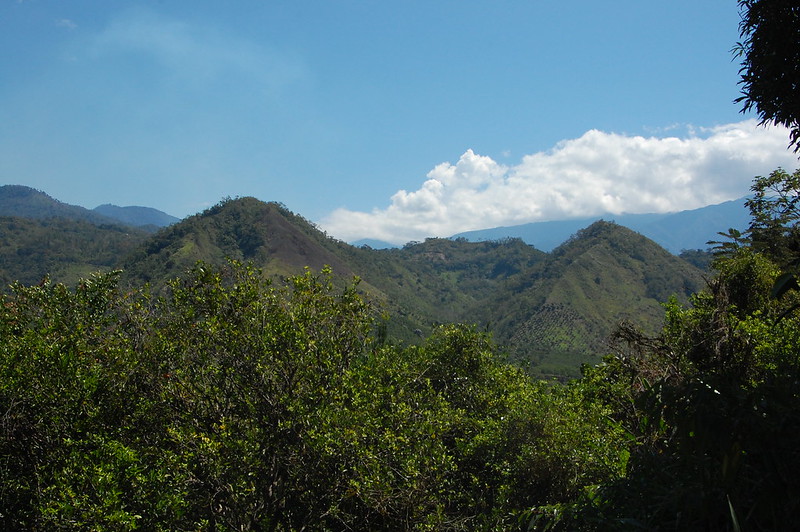 Arriving in San Ramón, the landscape clearly demonstrates why the Valle de Chanchamayo is a perfect climate for growing so many of the products the high Amazon is known for. Check out those green peaks – quite different than the toasted mountains of Huancayo I’d been hiking around just a week before! 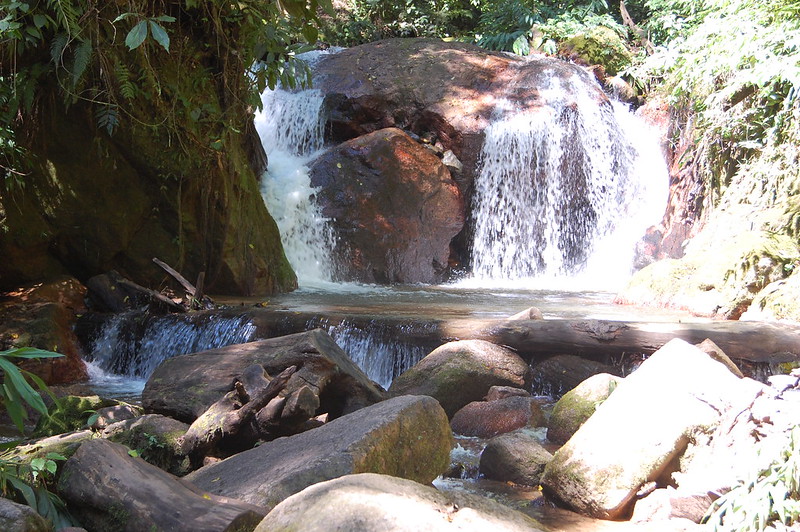 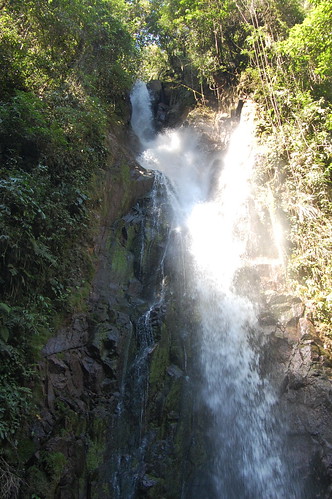 Now it was time to really appreciate the humid, verdant climate and head into the jungle in search of the Catarata de Tirol, the powerful waterfall you see to the right.

It takes about 30 minutes to walk to the waterfall and you have the chance to go swimming under its incredibly powerful water. While it is a fun experience, being surrounded by 30 other people makes it a bit challenging to really appreciate the natural wonder. (Luckily for me, I would see a LOT of peaceful waterfalls during the rest of my trip!) 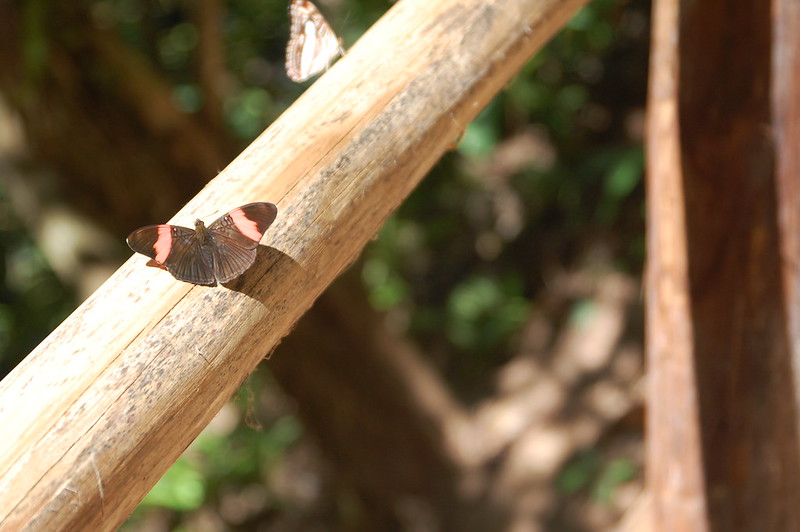 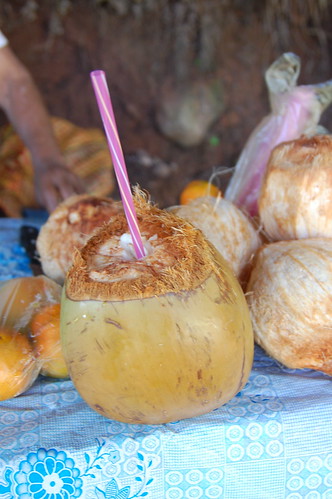 ersonally, I enjoyed watching all of the butterflies flying around us. I befriended a cheerful child who was accompanying us on the tour, and he went out of his way to spot butterflies so that I could try to capture a shot of them.

At the end of the walk, I couldn’t resist buying a fresh coconut. One of the things I most miss about Peru when I’m somewhere else is how readily accessible (and economical) all of the fruit from the jungle is. 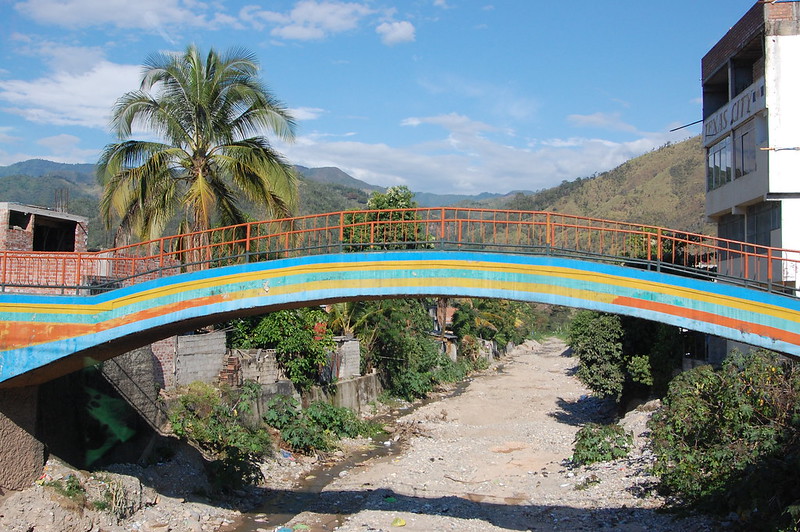 From there, we headed towards La Merced, stopping at the small tourist village that’s sprung up alongside Puente Colgante Kimiri. Although there wasn’t much to see, I appreciated this cheerful pedestrian bridge and wandering around looking at the stores before heading to lunch. 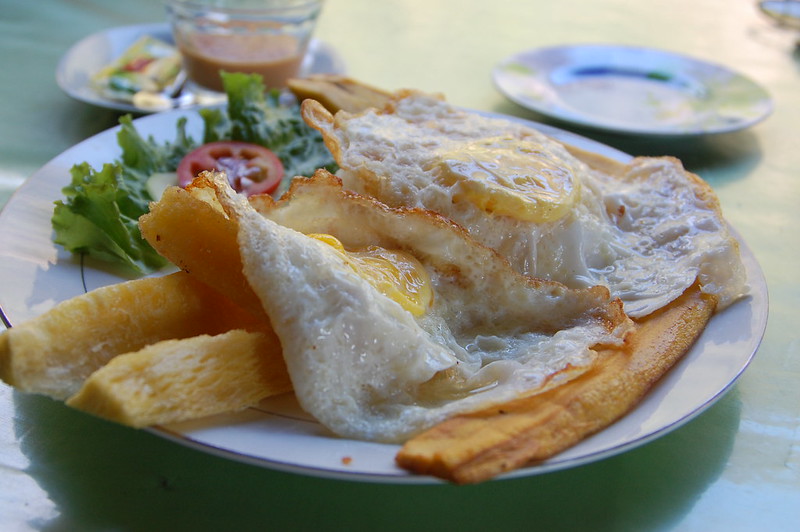 As with most tours popular among local tourists, a traditional meal of regional delicacies was in order, but as a vegetarian, my options were limited to arroz a la cubana, a common dish consisting of eggs, rice, and fried plantains, with the regional twist of fried yuca. Not bad for S/.5! 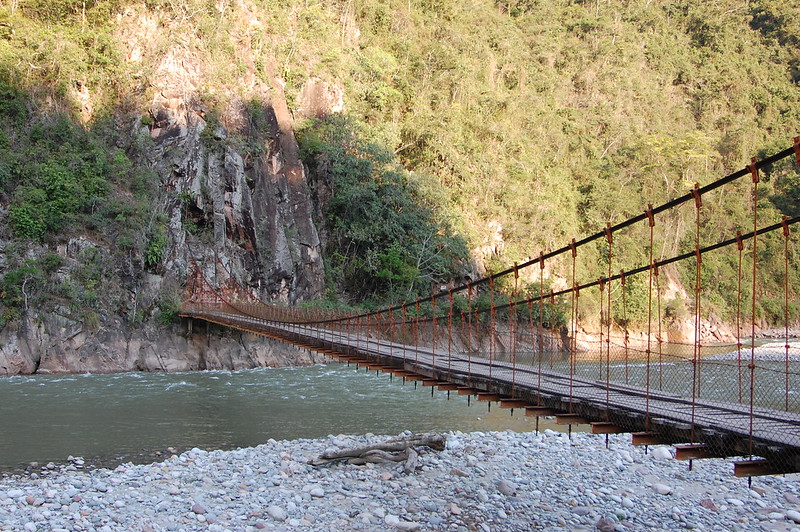 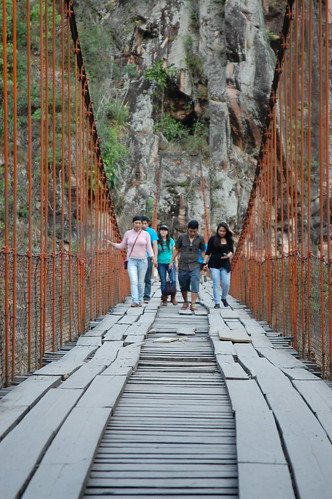 After lunch, we crossed the Puente Colgante Kimiri, an old wooden suspension bridge (built in 1901!) which connects the communities on both sides of the Chanchamayo River. Believe it or not, cars cross over this rickety bridge, but I was too scared to do so myself! 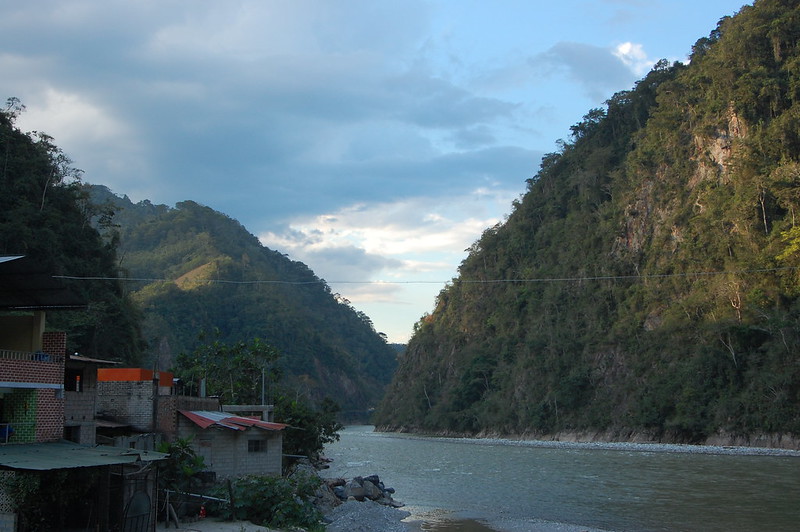 Instead, I took the opportunity to take some pictures of the views alongside the Río Chanchamayo as the sun began to dip down behind the mountains. I was fascinated by the cool trees. 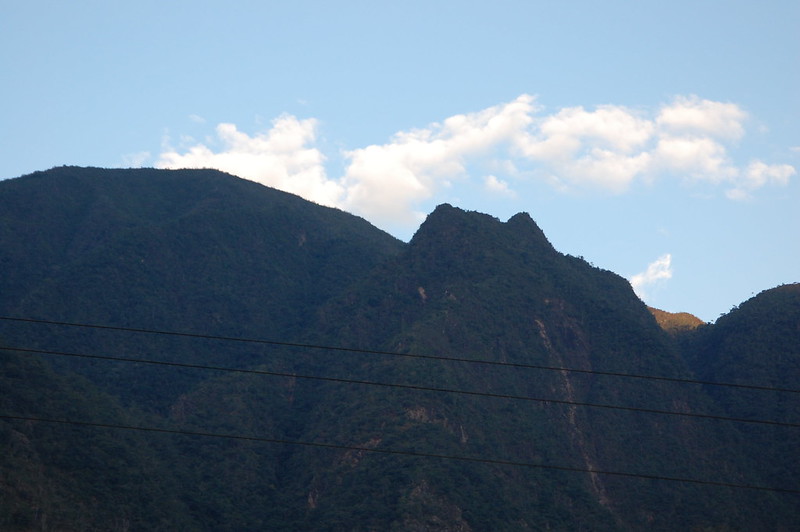 Continuing on, we passed the Nativo Dormido, or the Sleeping Native. According to legend, a young indigenous man saved a Spanish woman when she was wandering lost through the jungle and brought her to his community to help her. Naturally, they fell in love and promised the jungle god that they would get married before the full moon. The woman returned to her family, who punished her for wanting to marry a local and kept her from leaving. When she finally escaped, it was too late, and the jungle god turned the young man into the sleeping mountain you see here, and the woman into the Bella Durmiente (Sleeping Beauty) which can be seen near Tingo María, near Huánuco. 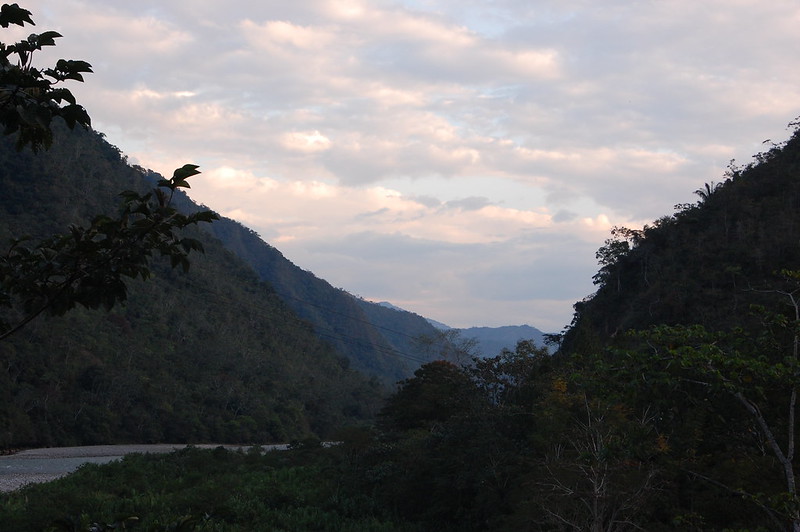 At this point, the sunset grew quite lovely, but we still had quite a few stops before returning to Tarma. Be prepared: it’s a very long day and many hours in a van!

Insight into the Asháninka People 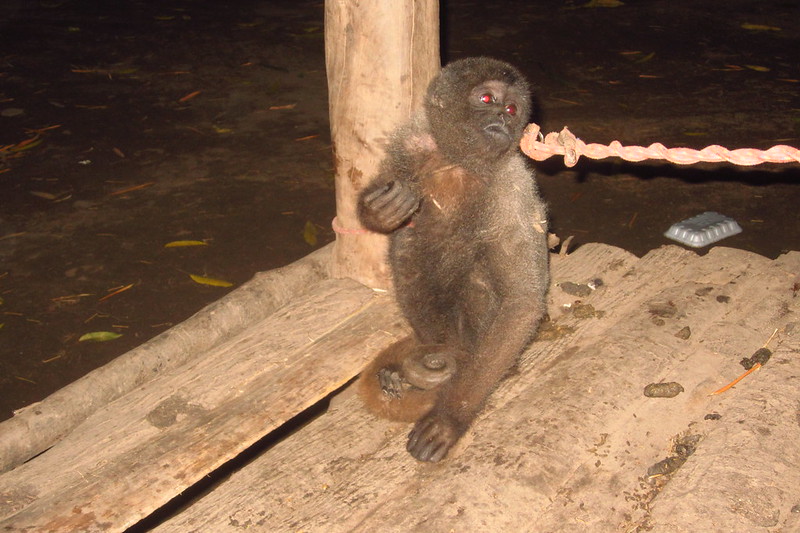 The second to last stop is at one of the communities of the Asháninka tribe, who live in this area and have started to earn a significant income from sharing their traditional songs and dances with the many tourists who visit from Lima and around Peru. While my young friend assured me that community enjoys performing and sharing their culture, it felt a bit exploitative as we dressed up in traditional costumes and were invited to participate in the dances. Afterwards, you’re led by the children to purchase jewelry, the same jewelry you see everywhere throughout Peru. I chose just to share this photo of the monkey because I was uncomfortable with the experience. What can I say? 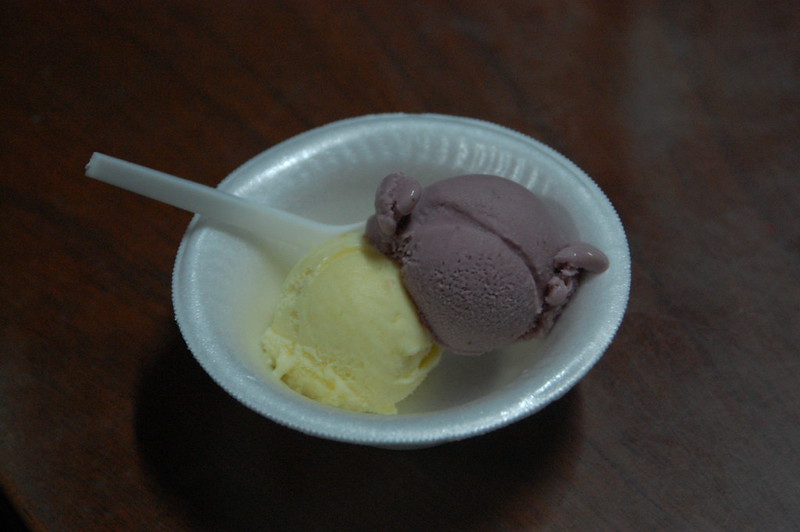 Last but not least, you stop to try the regional products at huge warehouse filled with samples, Chanchamayo Highland Coffee. Tourists are funneled through the explanation of all of the regional specialities in a long, crowded line. The bright side is that the coffee and products sold her are organic and/or fair trade and support the local growers, which is something I can get behind. It was pretty cool to have the opportunity to try juices and liquors made from jungle fruits, but of course, I opted for ice cream.

After our last stop at a small café, we hit the road for the drive back to Tarma. This ended up being a fun experience, as our tour guide explained more of the legends of the area. Someday I’d love to compile the legends of the Andes into English… a project to keep in mind for my next visit!

The tour of the Valle de Chanchamayo was my last stop in Junín as well as central Peru, but it certainly piqued my interest in the unique culture and climate of the jungle. As I continued on to northern Peru and eventually Ecuador, I decided to spend more time in the high jungle and I still plan to head deeper into the Amazon within the next year or so. I’d say the tour was well worth it!

For the latest photos from my travels in South America and in the US, be sure to follow me @blueskylimit on Instagram.