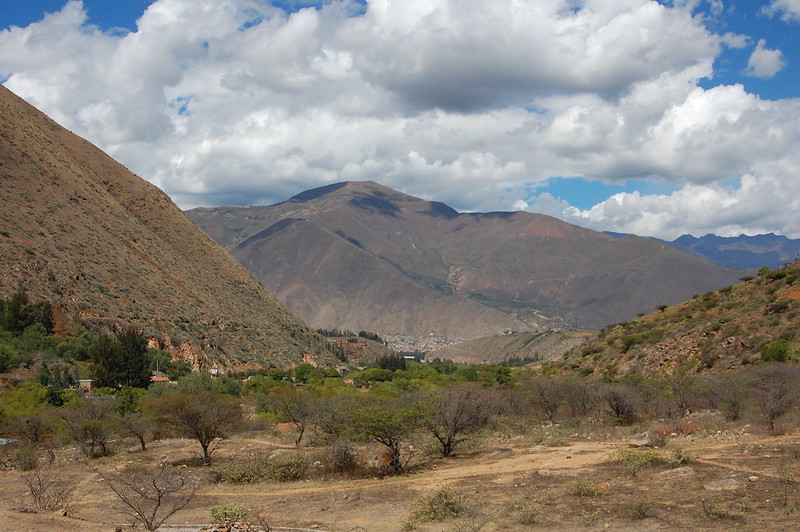 After spending an active, if rain-filled week exploring the fascinating culture, history, and landscapes of Huancayo, I knew I had to move on, but I wasn’t exactly sure where I wanted to go. Huancayo is only eight hours from Lima, but if I continued to head further north, I could access the jungle through Pucallpa, or return to the mountain landscapes of the Cordillera Blanca through Huaraz.

Whatever I decided, my next destination was certain: Huánuco. Besides providing more convenient access to the jungle, it hosts one of the most ancient archeological sites in Peru: Kotosh, known for its Templo de las Manos Cruzadas (Temple of the Crossed Hands), a set of ruins about which is little is known.

Only six hours from Huánuco, I decided to take a night bus and see how much I could see upon arrival. That turned to be quite a lot!

The City of Huánuco 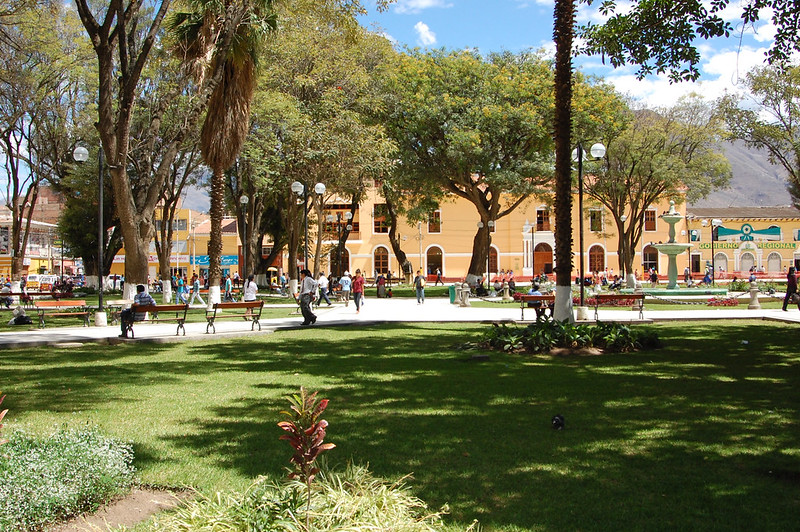 I arrived to Huánuco before dawn, and as I usually do with such early arrivals, I sat down in the bus terminal to get my bearings and wait for sunrise before getting in a taxi. As it turned out, Huánuco is a city of mototaxis, and that means noise, constant noise. Even staying in a room deep within the hostal located near the main plaza, I could hear noise constantly. Our relationship was off to a rocky start. 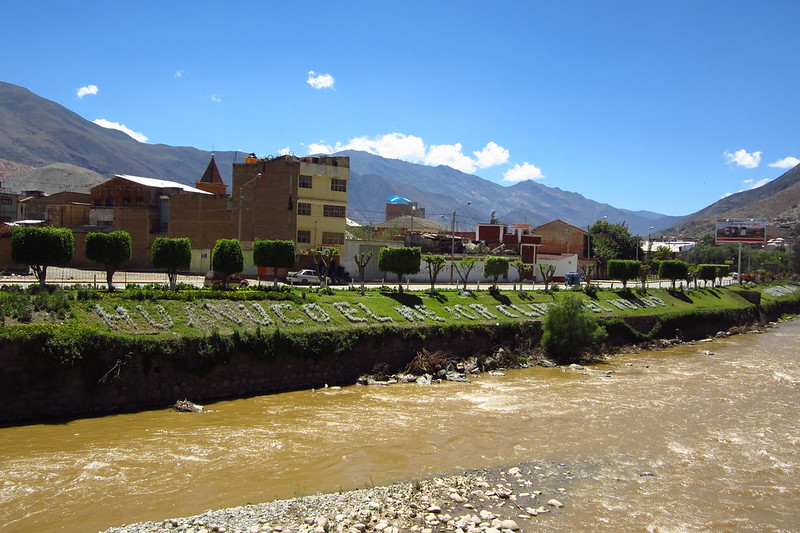 After getting a couple more hours of sleep, I headed out into the bright sun of Huánuco to get a sense for the city. Huánuco’s claim to fame is that it has the best weather in the world (according to Huánuco, of course!), and the sun and blue skies were my constant companions. Coming out of a week of rain, this was somewhat refreshing, but with few trees, it was a little overwhelming. 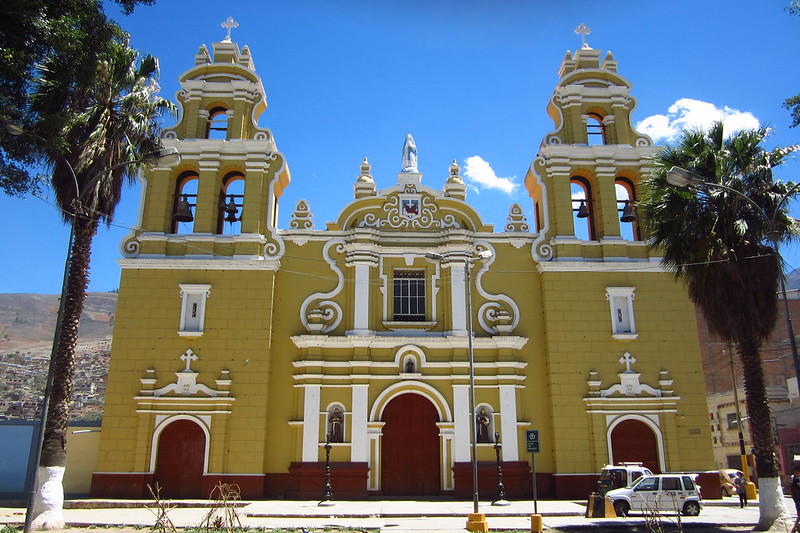 So while in the city of Huánuco proper, I spent most of my time wandering through the streets and heading to the cute plazas near the churches and colonial buildings, where I found benches underneath the trees and brainstormed where I wanted to go next. I particularly liked this church – and for some reason didn’t snap pictures of any others. 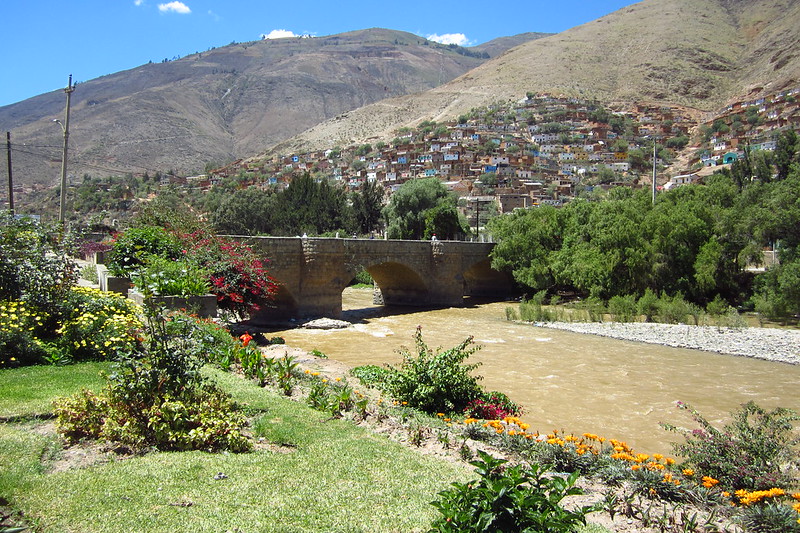 But if I’m being completely honest here, I actually did not like Huánuco – the city of Huánuco, that is. I loved the countryside and will share more about that next. If you’ve read other posts of mine, you’ve probably heard me talk about how amazing Peru is, and how much I love major urban cities like Lima and tiny towns that few foreigners visit. This is not me putting a positive spin on things; I connect to Peru. But I did not connect to Huánuco. 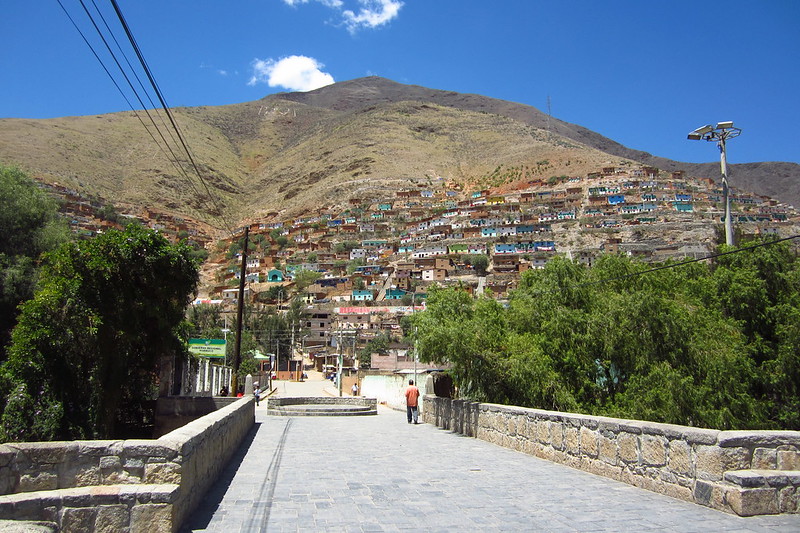 A couple of months after my visit, I read the book Lituma en los Andes (Death in the Andes) by Mario Vargas Llosa, one of Peru’s top novelists, and there is an apt description of Huánuco as this transitory city where people spend time escaping wherever they came from. I recognized that here; there was a heavy, dark energy in the city and I couldn’t wait to leave. 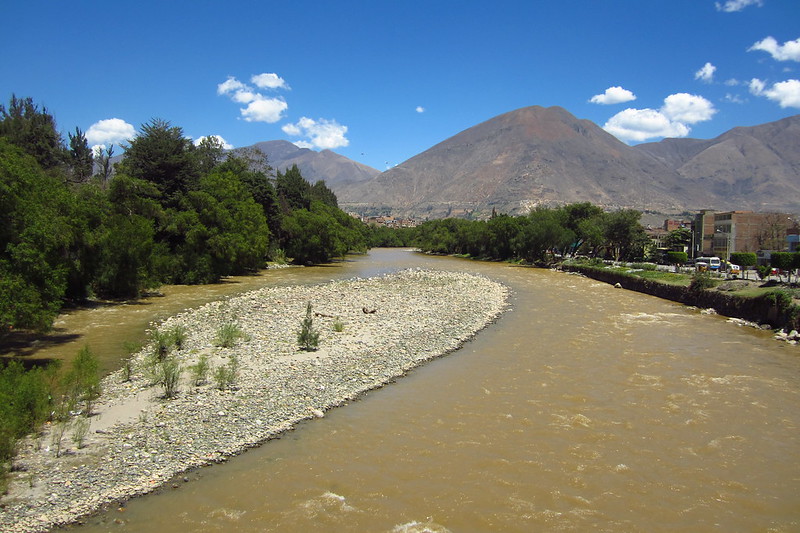 If you do visit, remember that there is more to Huánuco than its loud, noisy city. The local police actually serve as the tourist information office, and they also suggest heading outside the city to really get to know the region. 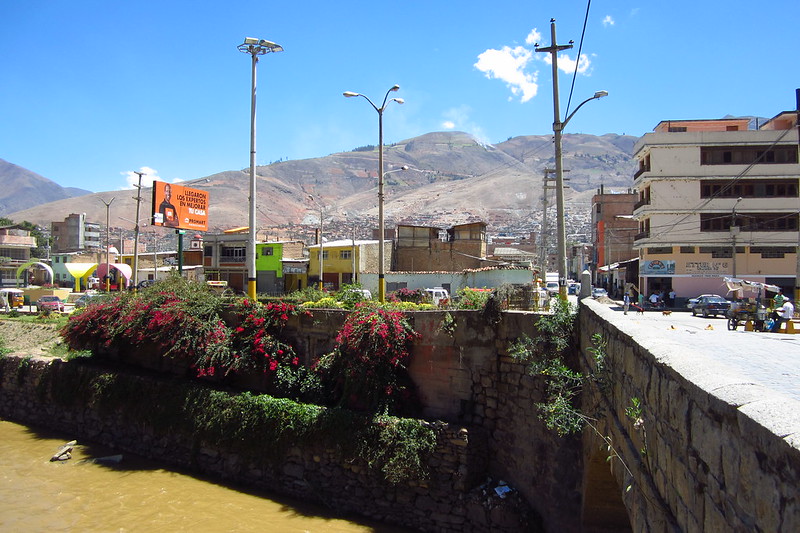 It’s worth spending an afternoon wandering through the city and checking out the many parks, but make sure to leave time in your itinerary to see Kotosh and other sites outside the city. I had originally hoped to stay at Casa Hacienda Shismay for a couple of days, and that would have given me a whole different perspective on what the Húanuco region is really like.

The Ancient Ruins of Kotosh 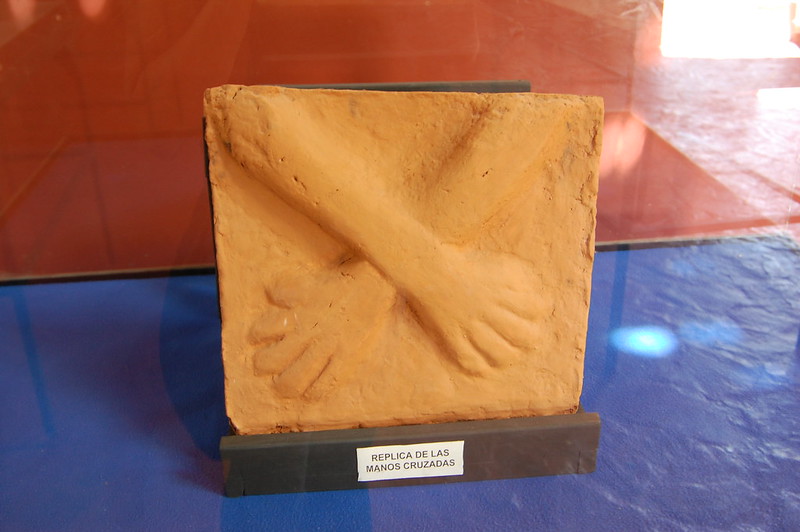 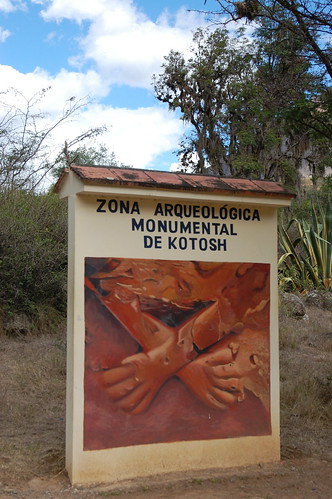 By the time I made it to Huánuco, it had been a while since I’d seen ruins, and I was curious about Kotosh because there is so little information on the site. It is known for the simple temple with two panels, each displaying a pair of life-sized crossed hands. One is crossed as you see in the picture, and the other is crossed in the opposite direction, thought to represent duality so common in Andean cosmology, the masculine and the feminine, heaven and earth, light and dark.

The small on-site museum is pretty sparse and includes this replica of the adobe hands, which have been removed in the name of preservation and can be seen in Lima’s archeological museum. 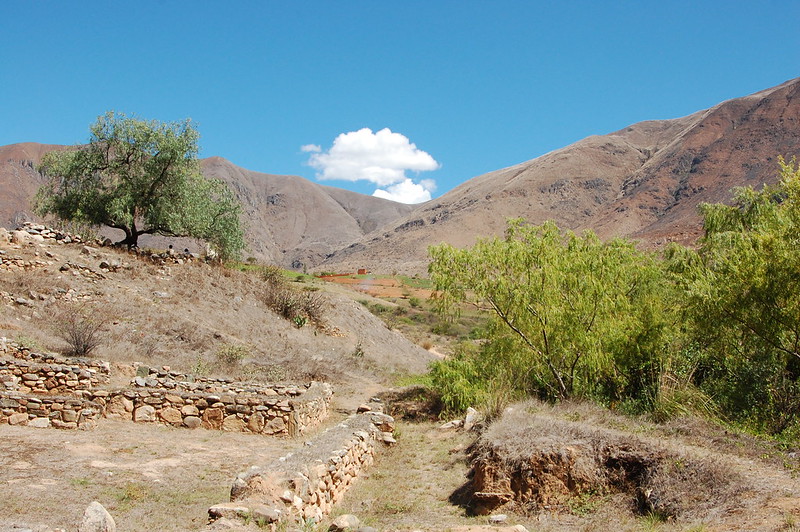 The most important thing to note about Kotosh is that the ruins are set in the midst of a fertile landscape. I couldn’t stop peering off into the mountains and appreciating the distant hills. Of course, this was probably strategic; many sacred sites are surrounded on all sides by hills. 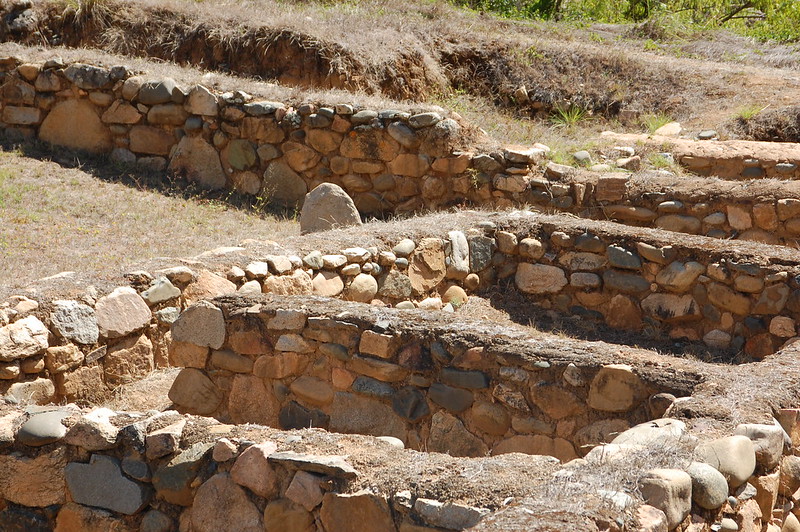 My first stop was this set of small temples, which are from the “most recent” period of inhabitants (and are the most photogenic!). 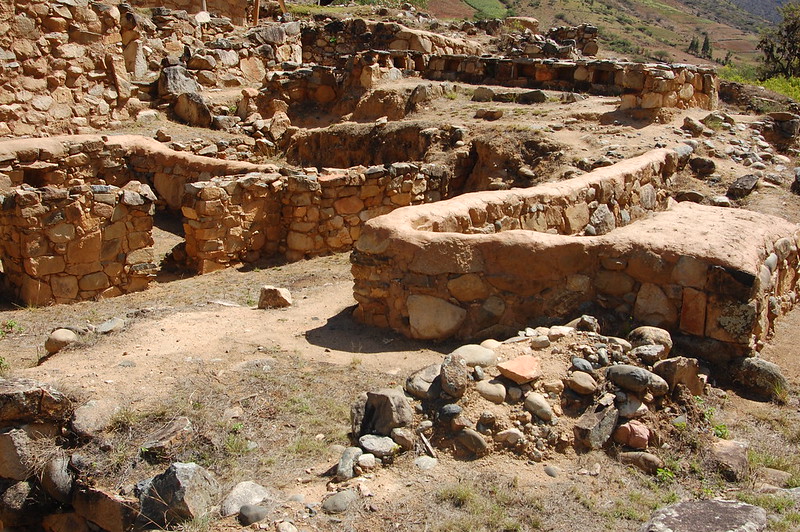 These ruins have bene studied for years by Japanese archeologists, but there is little that is actually known about the ruins except that they were ritually abandoned and filled in, until finally the people who lived here left completely. 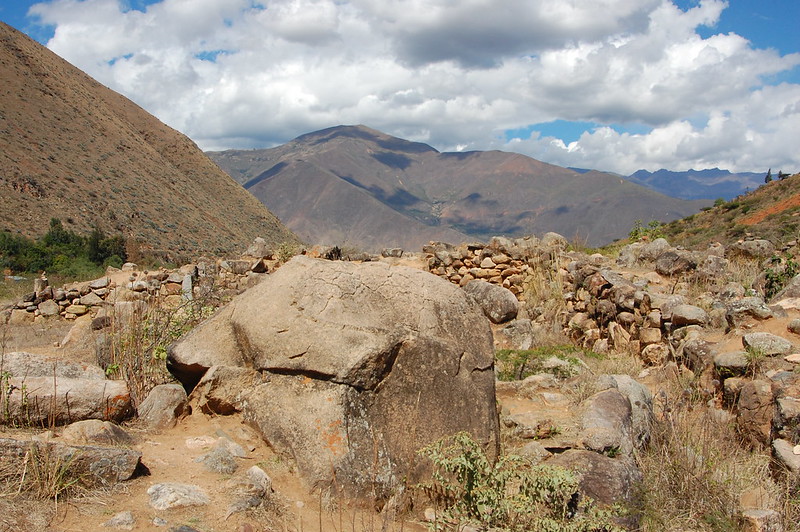 In fact, the earliest era is just called the Tradición Mito (myth tradition), and it is assumed that there was a loose camaraderie among the most ancient inhabitants. Later on, there seemed to be more exchange with other, more organized groups like those at Chavín de Huantar. 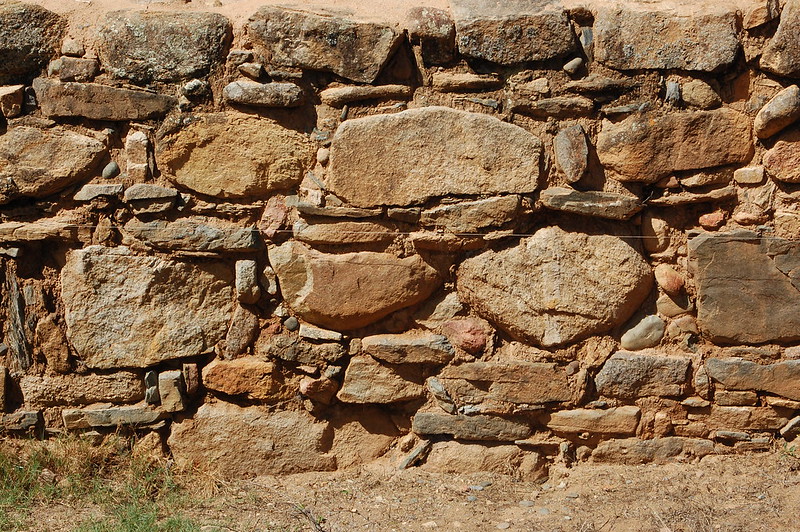 But basically, very little is known about these ruins except that there seemed to be some sort of ritual burning (which could have been to stimulate crop growth) and ritual burials of temples, which was also common with the adobe temples on the coast. 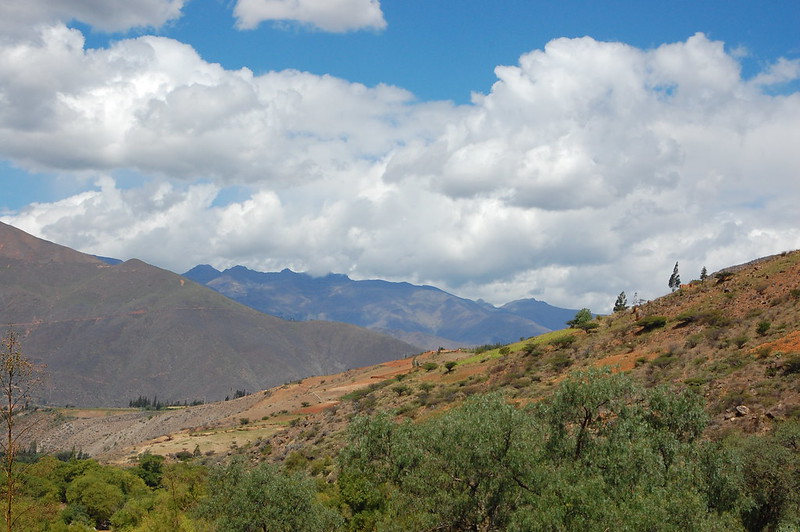 Like so many ruins, there is little we know, and much we speculate. But we can definitely agree that they had excellent taste in choosing beautiful surroundings. 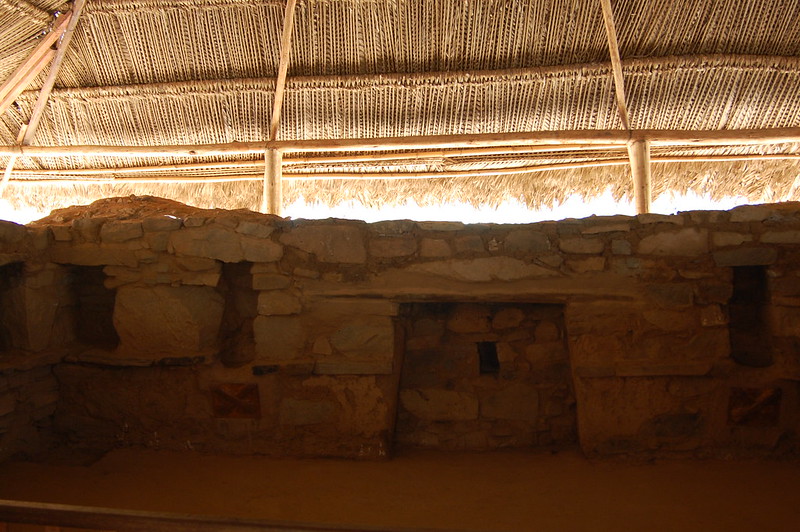 After checking out the ruins from the later period, it was time to move on to the main event: the Templo de las Manos Cruzadas. This structure is the largest and as such it seems to be the most important; there are niches carved into the walls, and as this shot shows, this is where the two sets of crossed hands used to be located. 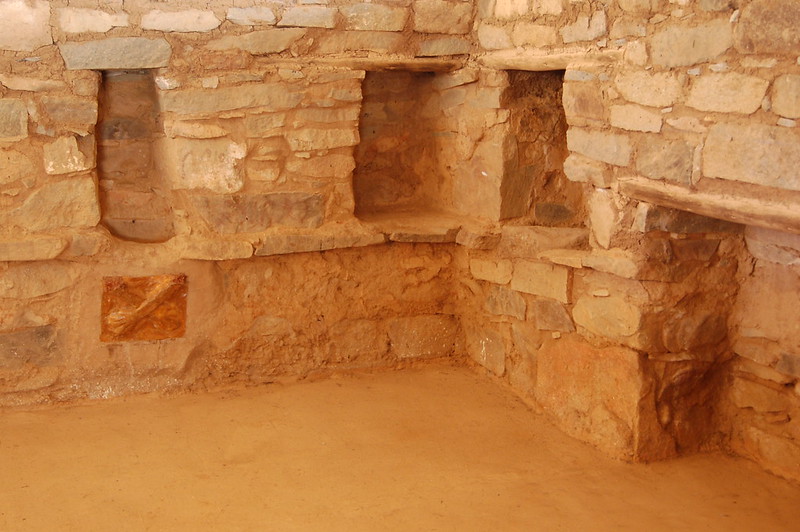 The temple also had two floors, which is thought to represent duality as much as the adobe carvings of hands in mirror image. 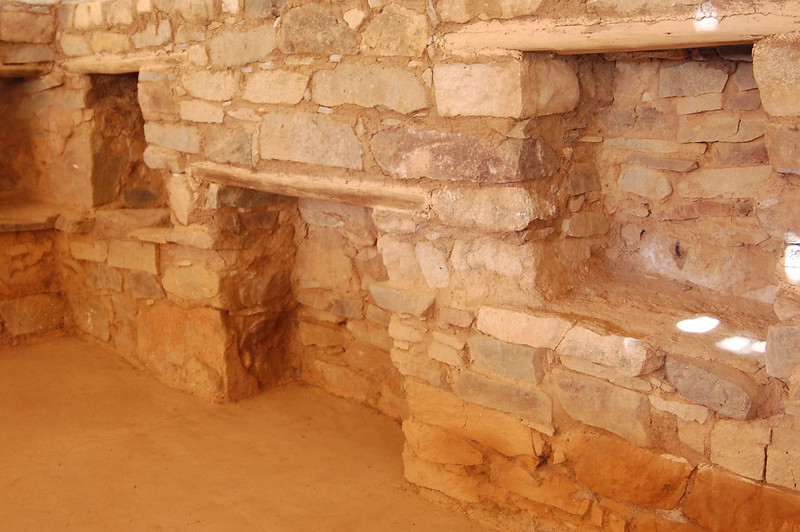 There was a firepit in the middle of this temple, but little else has been determined about this structure. All we can do is speculate as to what rituals used to happen here, what the beliefs once were, which is part of the mystery and appeal. 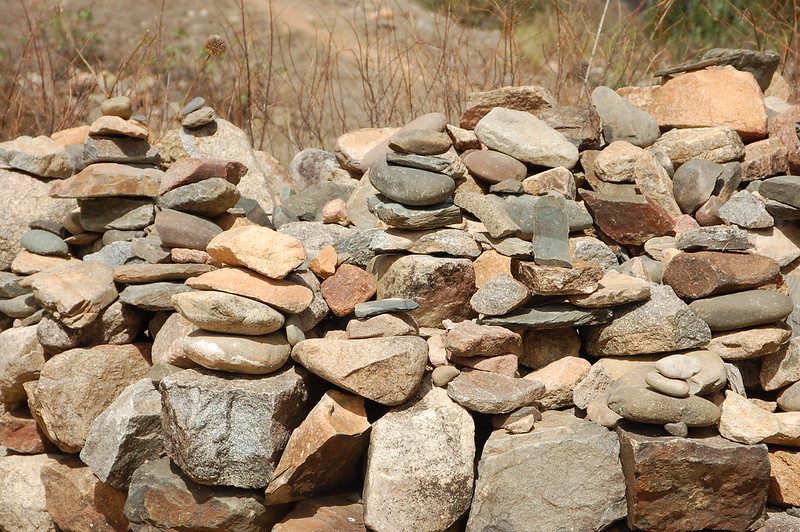 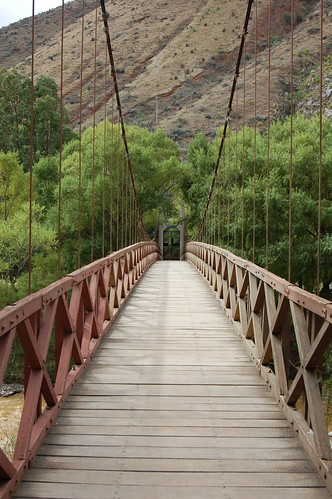 As anyone who loves the Andes has learned, bits and pieces of these traditions have survived over the years, through all the conquering cultures that came after, and remain part of the cosmovisión that lives on today. We may not know details, but we see this connecting thread through time.

And for some reason, just as you find in many other beautiful spiritual sites and natural wonders, recent visitors have left apachetas, or cairns here as well.

After visiting the ruins, I headed out of the archeological site to the park by the river, crossing this fantastic suspended bridge.

I only wished I’d brought a picnic lunch to sit by the river and enjoy the peaceful surroundings.

But my adventure in Huánuco wasn’t over yet: I was heading into the countryside to enjoy more of these scenic views and see a little bit of small town life.

(ps…Stay in touch with me and my travels by following blueskylimit on Instagram!) 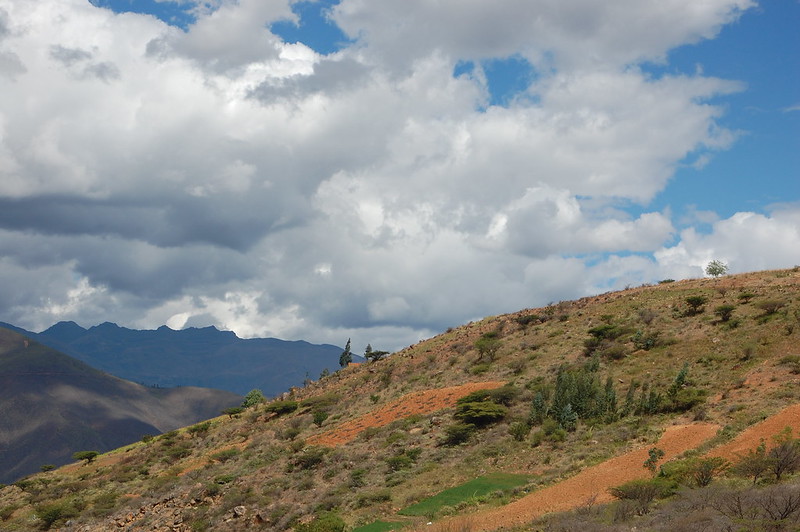