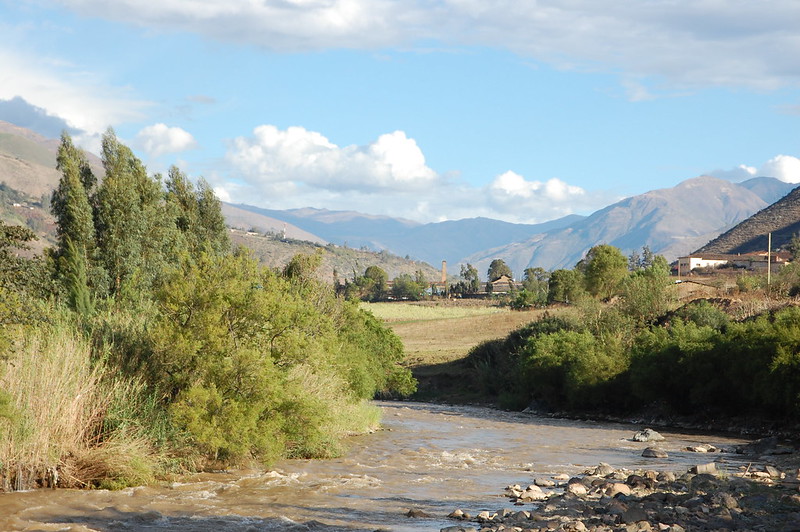 When I first arrived in Huánuco, I had one main goal: I wanted to visit the ruins of Kotosh and learn what I could about this very ancient archeological site. But Huánuco is so much more than that, and I want to make sure you know what I didn’t before my visit: the countryside is gorgeous and you should try to spend some time out here rather than in the city.

As it turned out, I was lucky because the taxi driver I hired to take me to Kotosh was eager to show me the rest of Huánuco. He was adamant that I visit the other major tourist attraction of the region, and one that I had never heard of before: La Casa de la Perricholi. 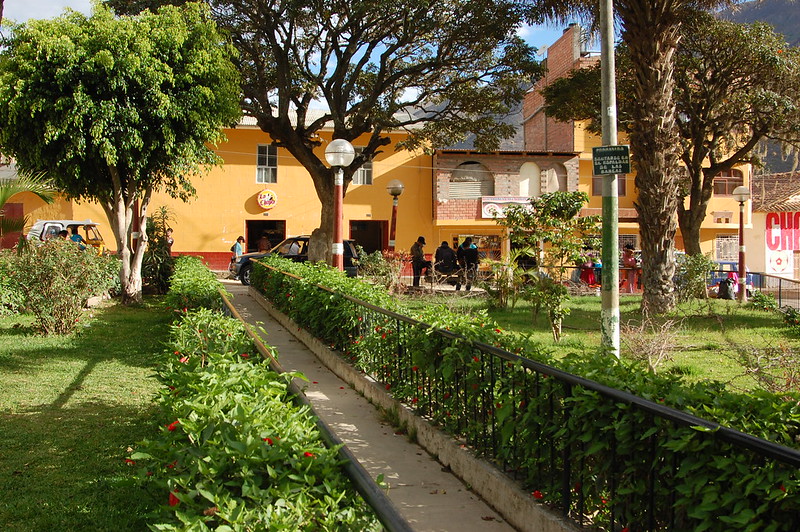 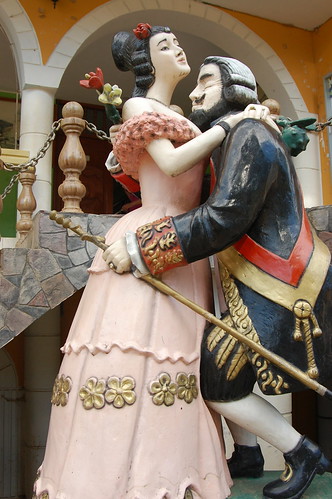 Fourteen kilometers outside Huánuco lies the tiny town of Tomayquichua, with a very pleasant green plaza and a story that dates back to the colonial era.

You can get a sense for the story if you look at the statue that sits in front of the municipal building. A tall, regal woman embraced by her short lover.

This love affair being celebrated by the town of Tomayquichua is none other than that between a woman named María Micaela Villegas y Hurtado de Mendoza and the Viceroy Manuel de Amat in the 18th century.

This star of Peruvian colonial theatre is more commonly known by her stage name, La Perricholi. 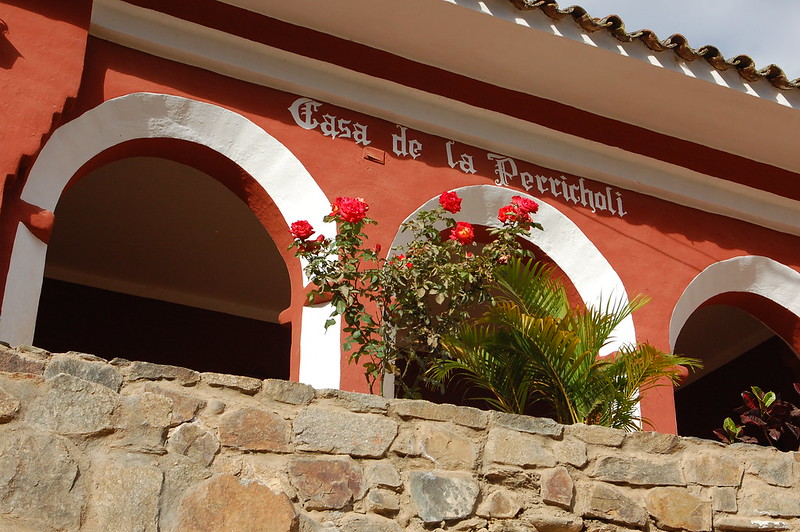 So why does Tomayquichua honor this woman, a famous actress in the 18th century, who had a scandalous fourteen-year-long affair with a man almost three times her age? Because, supposedly, she was born here, in this little house, although there is a strong argument that she was actually born in Lima. 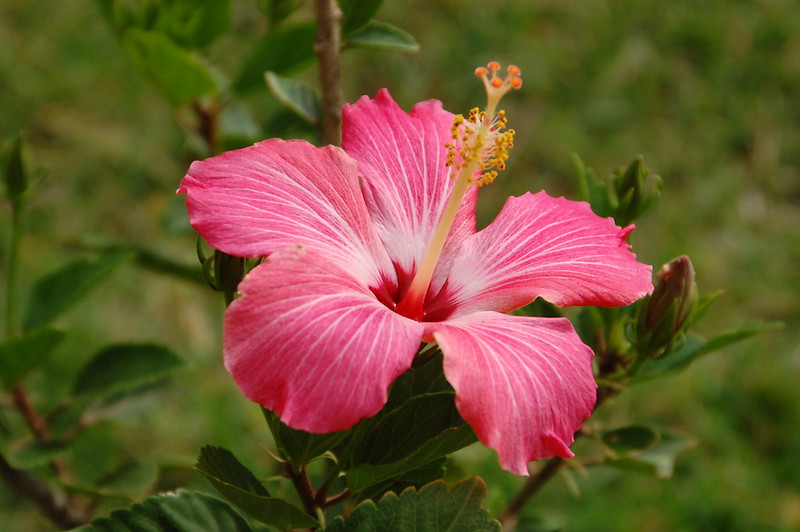 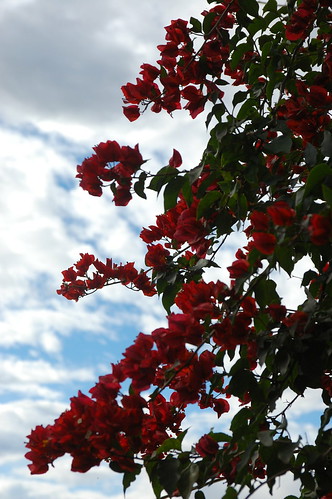 Whatever the actual story, it worth visiting La Casa de la Perricholi because it is a house turned into a museum honoring this one fascinating person.

La Perricholi was born in 1748 and had become a much-admired theatre actress by age 20.

It was soon after this that she attracted the attention of the powerful viceroy, and they defied convention and publicly displayed their relationship on Lima’s social scene for fourteen years. That’s pretty progressive for that era! 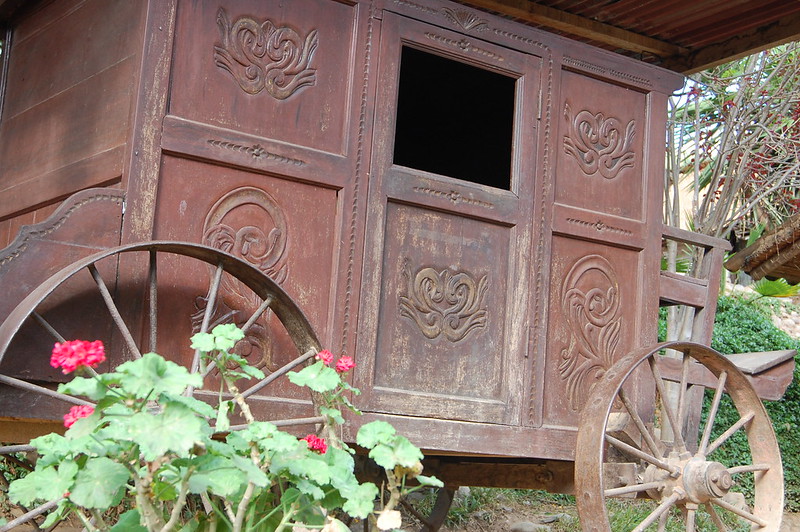 When visiting La Casa de la Perricholi, you can see the tiny house where she was (supposedly) born, although she lived the majority of her life in Lima. There is this pretty carriage, but I’m not sure if this dates back to that era because it seems to be in pretty good condition. 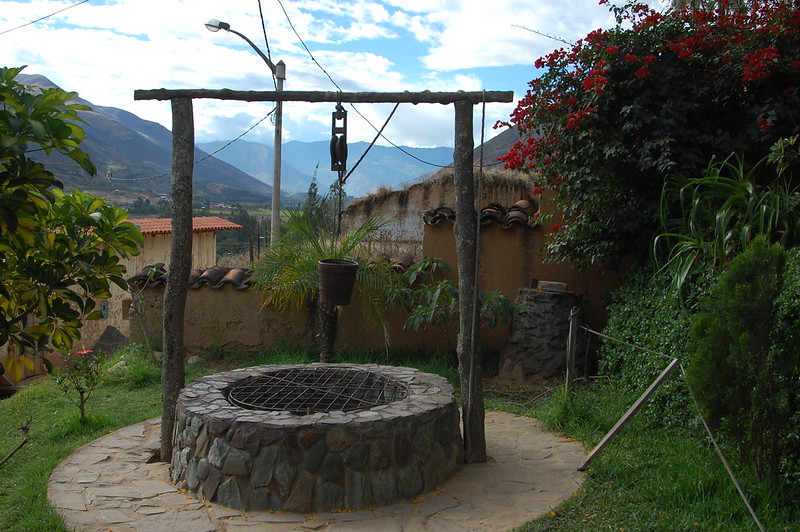 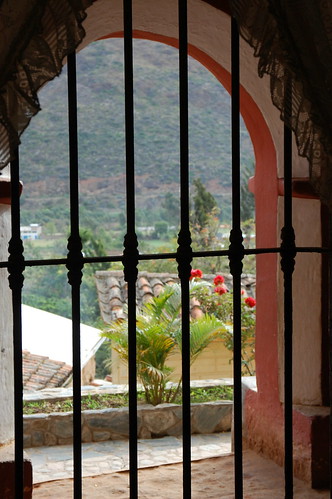 You can even make a wish at this wishing well. I’m not sure how many women have wished for an extremely powerful prince to make them princesses – what do you think?

Either way, it was nice to get out of the city and into this laid-back town, surrounded by the green hills, with small houses. It certainly gave me a more complete perspective on what life is like in the region, with its lovely climate and agricultural focus.

(As I mentioned in my post on the city of Huánuco, there were haciendas in this area back in the day – which means the growing is good!) 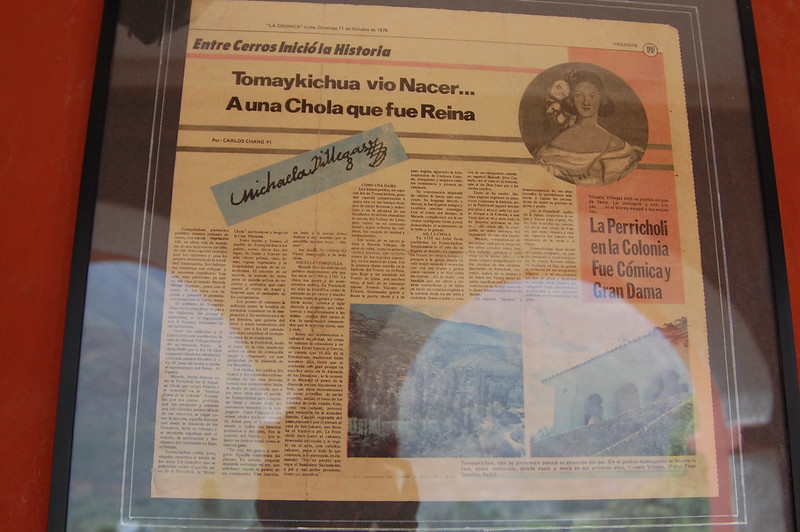 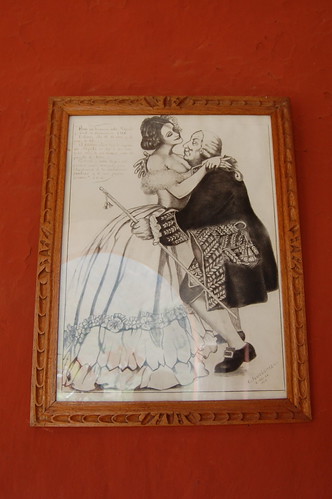 After touring the tiny property, you can read article after article about La Perricholi. The headline in the article above says “Tomayquichua witnessed the birth of a chola who became a queen.” (In Peruvian Spanish cholo/a refers to someone of Andean birth, generally indigenous or mixed race heritage, and can be used both positively or negatively depending on the tone and intent.)

To be fair, La Perricholi is actually still quite recognized for her role in Peruvian history. She pushed for some of the beautiful colonial parks and constructions in Lima that exist to this day, most notably La Alameda de los Descalzos in Rímac. She has been the subject of countless books, movies, tv shows, and even an opera!

So, if you’re in Huánuco, you should definitely visit. It doesn’t really matter where she was actually born, but it’s a good way to get a sense of her role in Peruvial cultural memory!

Views of the Countyside of Huánuco 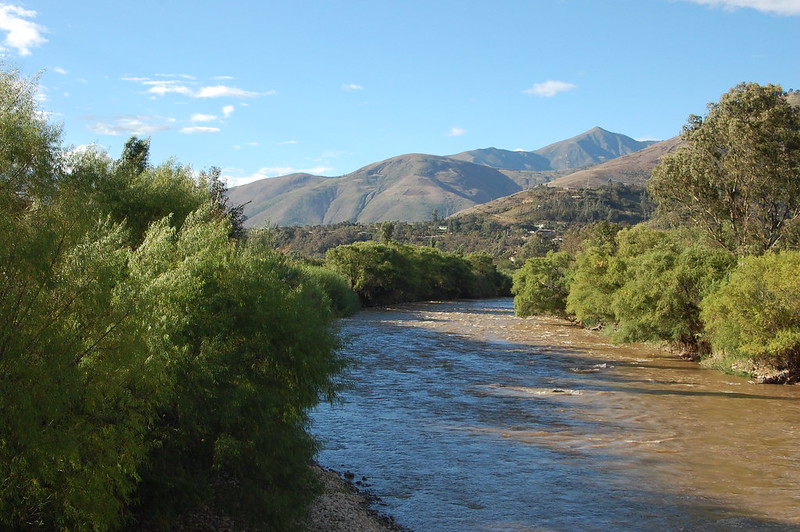 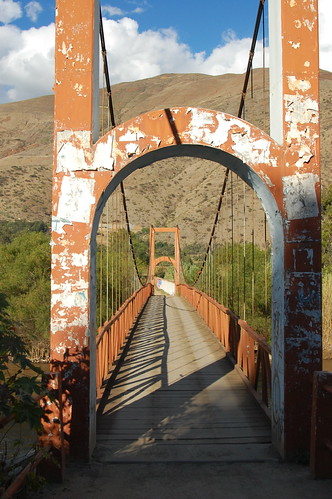 After my tour of La Casa de la Perricholi was complete, we moved on to a small pisco distillery, but since I wasn’t planning on buying I felt too awkward to take any pictures or even note the name. Be sure to ask in Huánuco if this sounds appealing, or just ask your taxi driver to take you there.

But the part I did like? Heading over yet another suspension bridge and taking pictures over the pretty river.

Looking at these pictures three years later, I’m struck by how much this landscape reminds of the Valle de Elqui in northern Chile. Low brown hills, suspension bridges, maybe a few more trees?

Well, I love the Andean landscape so it makes sense that this would appeal to me. 🙂 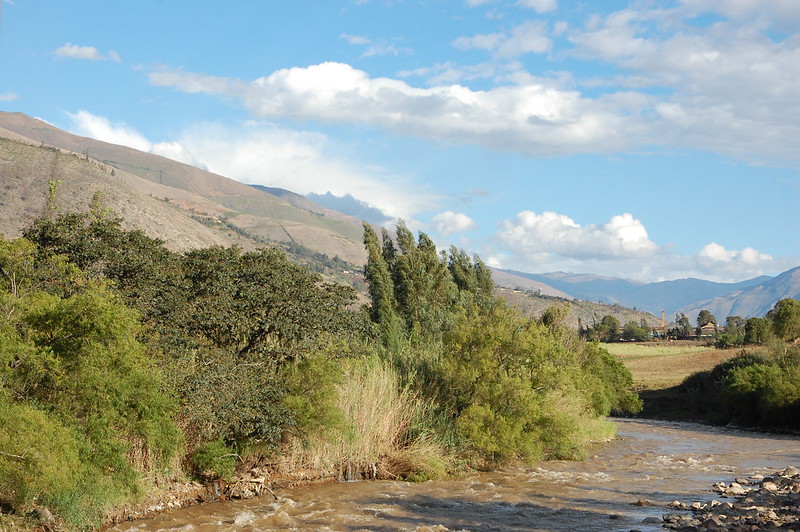 If you have any interest in getting to know the landscape near Huánuco, the Casa Hacienda Shimay comes highly recommended. If I ever make it back to this region, I’m definitely going to stay there. It would be amazing to spend a couple of days relaxing, disconnecting, and going on hikes and horseback rides around the region. Ahhh. 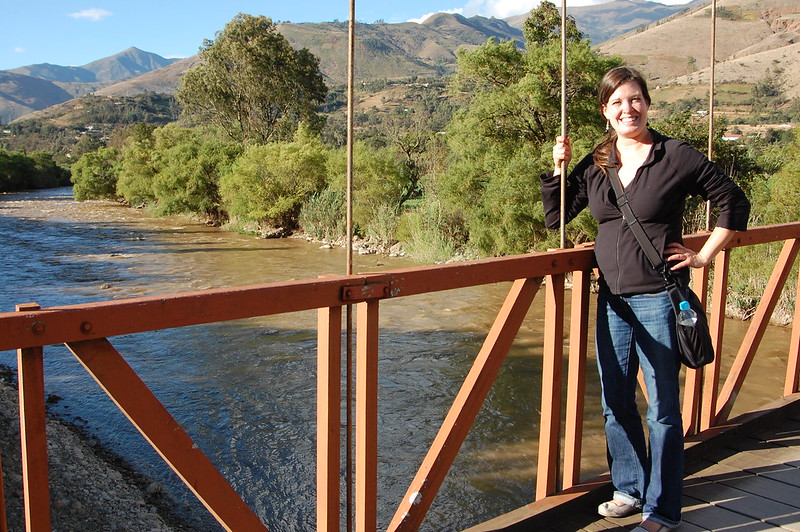 But all in all, I enjoyed getting out of the city and seeing a little more of what Huánuco has to offer. As I mentioned, the city wasn’t for me, but the scenery definitely was. Just another reminder of how your perceptions of a city or a region can be colored by your (usually limited) personal experience. So be sure to get on that local bus to Tingo Maria or hire a super affordable taxi to get into the countryside and really see what this region is about.