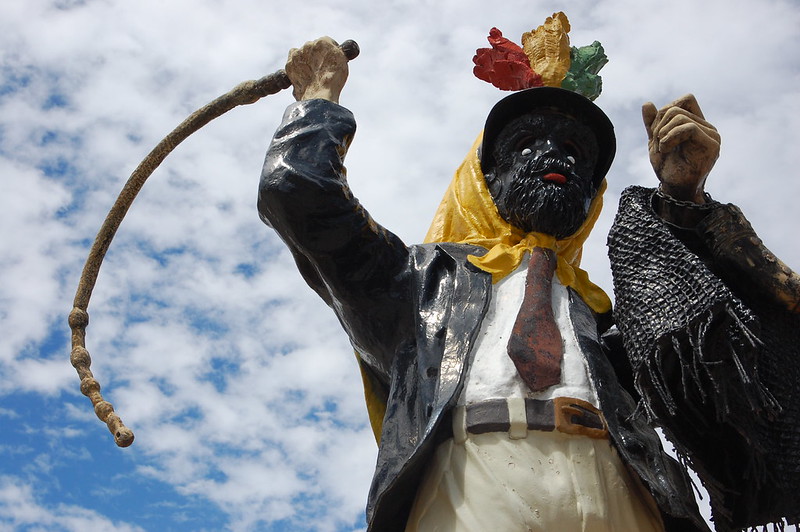 If you’re spending an extended amount of time in Huancayo, you can really get to know the region. You can explore its natural wonders and do some hiking by heading to the rock towers at Torre Torre and the Bosque Dorado in nearby Paccha. You can explore artisan traditions by taking in the mates burilados at Cochas Chico, traditional hats in San Agustín de Cajas, weavings in Hualhuas, and gold and silver jewelry in San Jerónimo de Tunan. You can visit the fascinating parks in the center of Huancayo or head to Jauja to visit the Laguna de Paca.

If you want to know more about the history of the region, be sure to visit the Franciscan convent at Santa Rosa de Ocopa, but if you really want to get off the beaten track, you should head to Huari, in Huancán, near Huancayo, where you can visit pre-Incan ruins related to the Wari/Huari, another giant empire that once ruled much of what is now Peru. (You can read more about the Wari in my post about visiting Wari ruins in Ayacucho.)

And while you’re over in this part of Huancayo, you should head to Chongos Bajo, founded in 1532 and one of the oldest towns in the region. Both can be visited on a day trip from Huancayo that is really off the tourist trail but well worth your time. 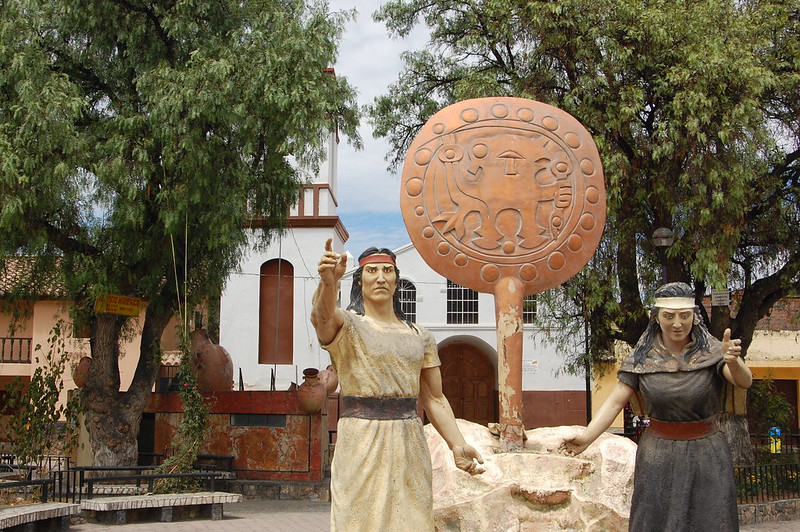 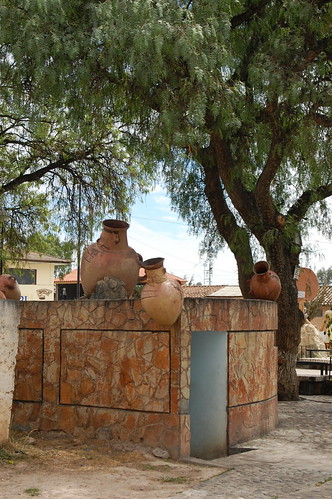 The little population of Huari is located on the outskirts of Huancayo, basically where the most distant neighborhoods of the city turn into small farms.

You’ll know you’ve arrived because of these statues in the tiny plaza, commemorating the Wari people who once had one of their major sites here. (And, well, because it’s the last stop on the bus!)

The plaza also displays replicas of the ceramic tradition followed by the Wari, as you can see here. 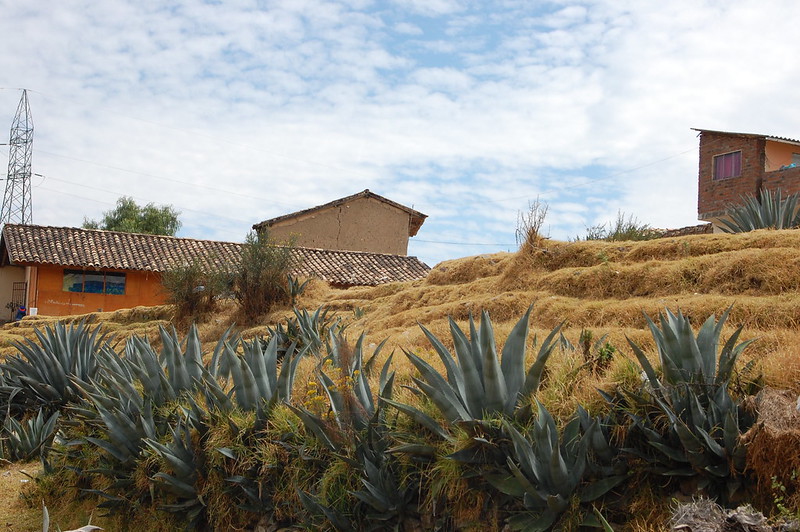 Although I’d done my research on the ruins of Wariwillca before hopping on the bus, I’d heard conflicting reports about whether it was open on Mondays and decided to risk it. Unfortunately, it’s not – so I wasn’t able to head inside the ruins and decided to just walk the perimeter to see what I could scope out. 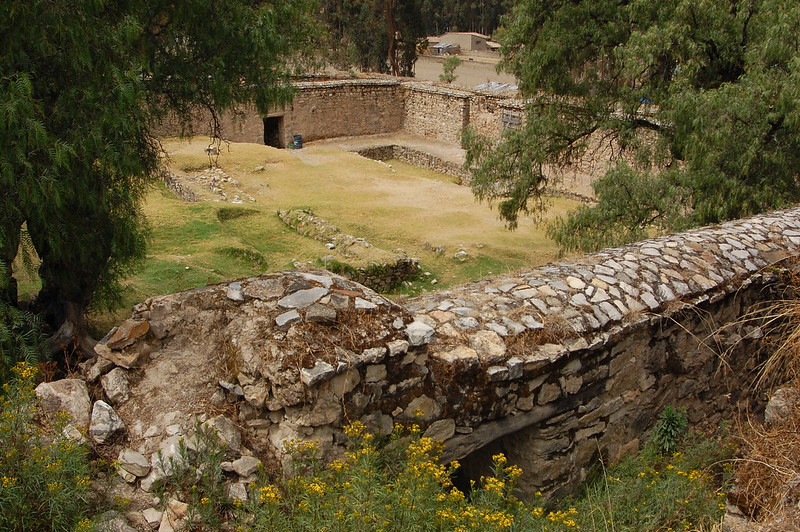 Although this site was once very extensive, the ruins that are currently preserved are pretty small. That said, the legends about the place seem fascinating (some details in Spanish here) and it’s probably well-worth hearing what the guide has to say. 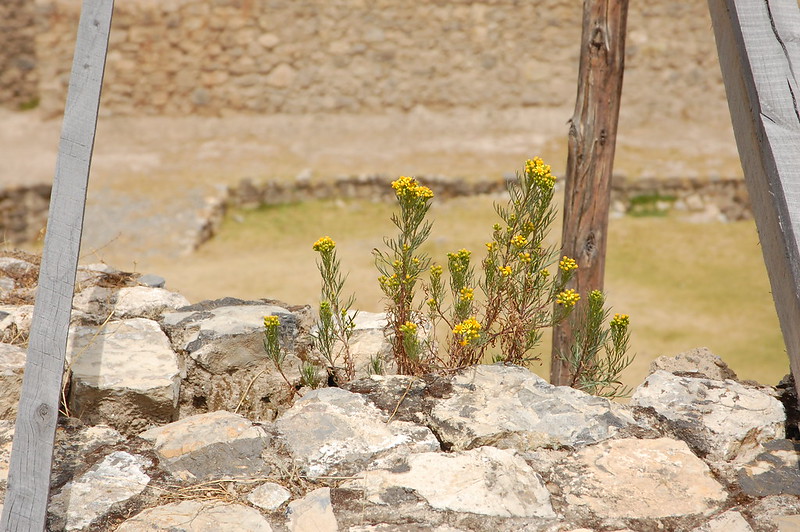 I think this photo particularly captures what it was like for me to be outside, looking in. Travel fail! 🙂 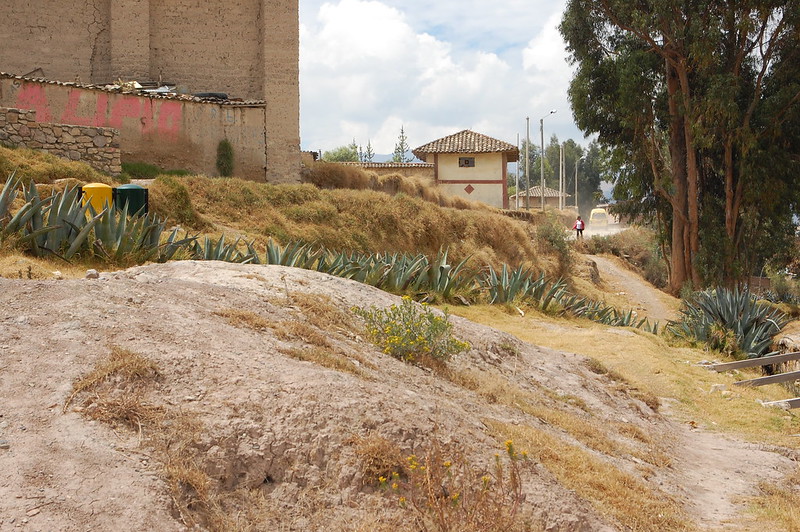 In any case, I enjoyed the peacefulness of the little población, which probably doesn’t see that many foreign visitors. 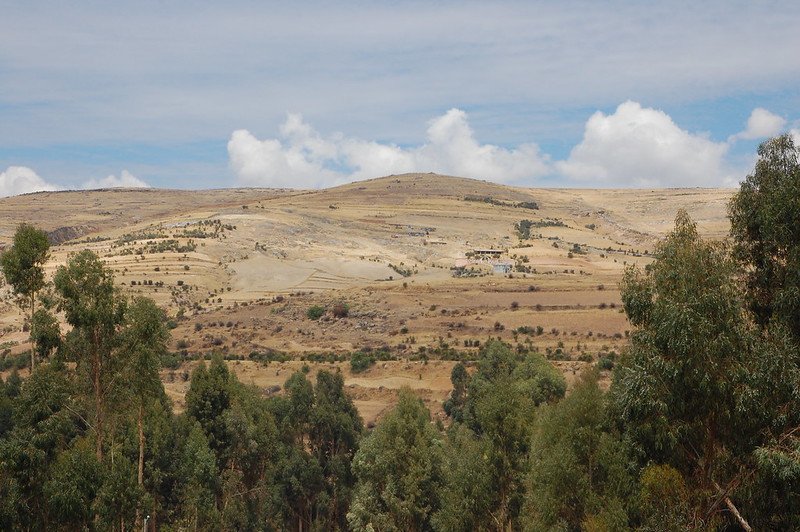 In the end, it was worth heading here just for the views looking over the Valle del Mantaro. When you’re traveling by bus through the Huancayo/Junín region, you pass through so many hills like this one. This photo transports me back. <3 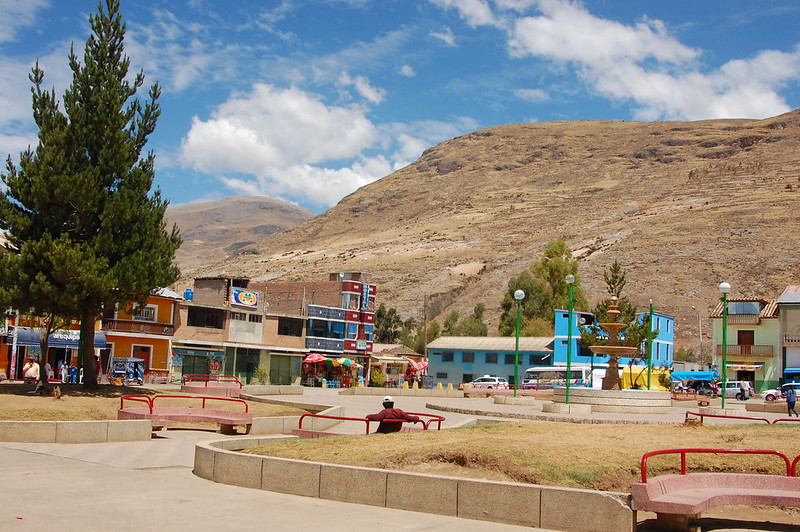 Since it was a beautiful day, I decided to continue on to Chongos Bajo, located a little further outside of Huancayo and also easily accessible by public bus. If for nothing else, this trip is worth it to admire the views passing through the foothills of the Andes. 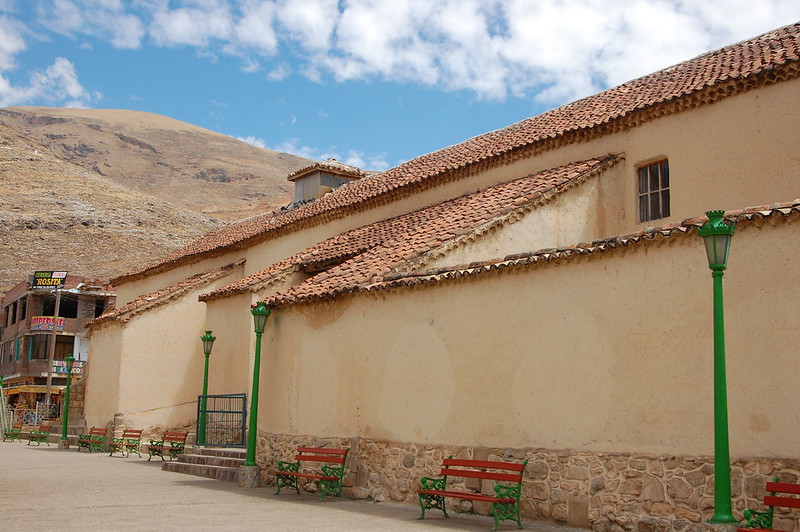 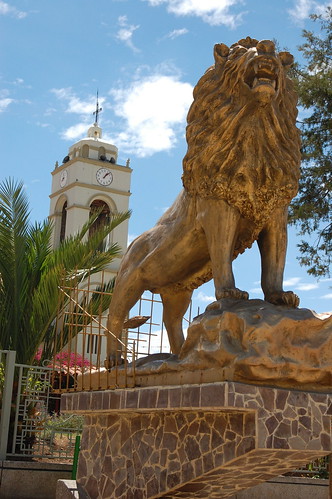 Chongos Bajo is one of the oldest towns in Peru. Once inhabited by the Wanka, then taken over by the Incas, this city was one of the first invaded by the Spanish colonizers.

The city was founded as Santiago León de Chongos in 1534 and became one of the first places where the Inquisición took place.

The Spanish were particularly interested in this area when they found gold and silver nearby. I wonder if the golden lions are a reminder of that former richness.

The Iglesia Matriz (mother church) was built in 1565, and much of the construction is original, having survived centuries. In fact, that was the reason I was told to visit – the history and art contained within the church. 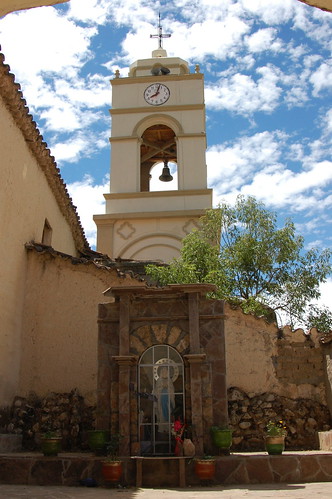 Although I did not know this at the time, there is also a beautiful little chapel located in the foothills of Chongos Bajo. The Capilla el Copón was founded in 1550 by Inés Muñoz de Alcántara, Francisco Pizarro’s cousin and apparently the first Spanish woman who arrived to Peru.

If you do make it to Chongos Bajo, be sure to visit this little photogenic chapel too (and send me pictures!). 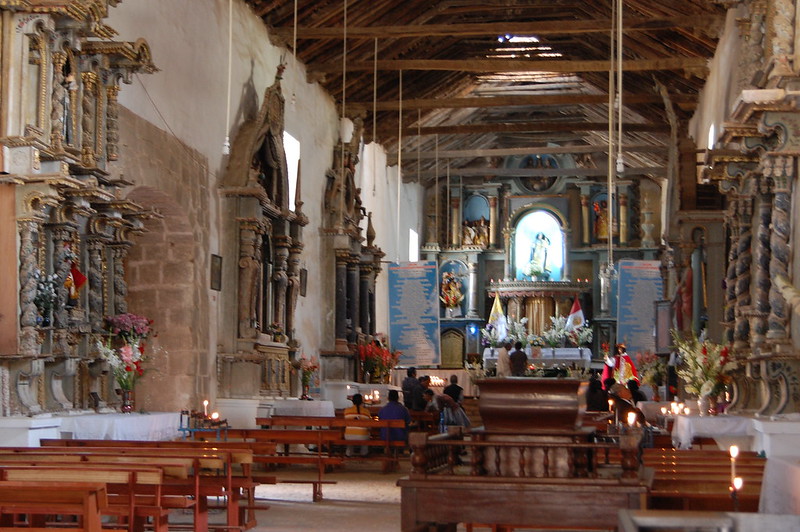 Even this little side chapel had beautiful art. There was so much to see in and around the plaza. 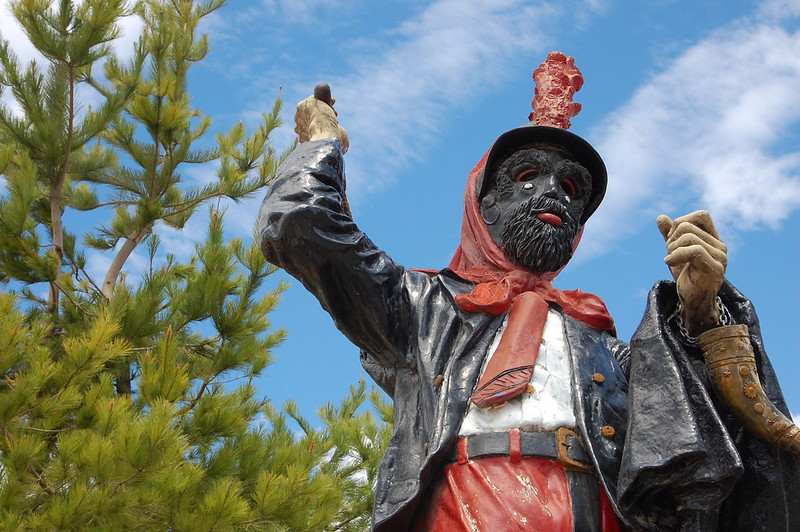 In the plaza, you can also spot these fascinating statues in costumes reflecting the dances of the region (the other one leads this post up). I enjoyed that each town I visited had a unique representation of the strong Huanca (regional) identity. 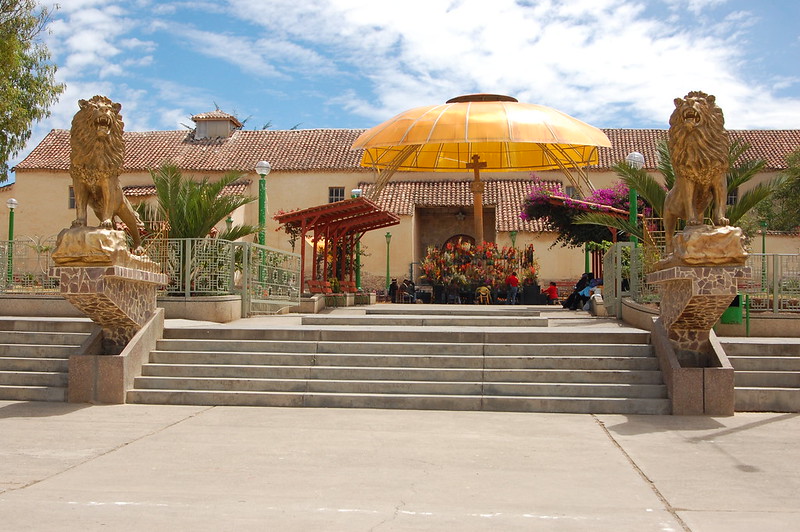 But what most surprised me about my visit to Chongos Bajo was this cross in the center of the plaza, called the Cani Cruz, a much venerated symbol of devotion. 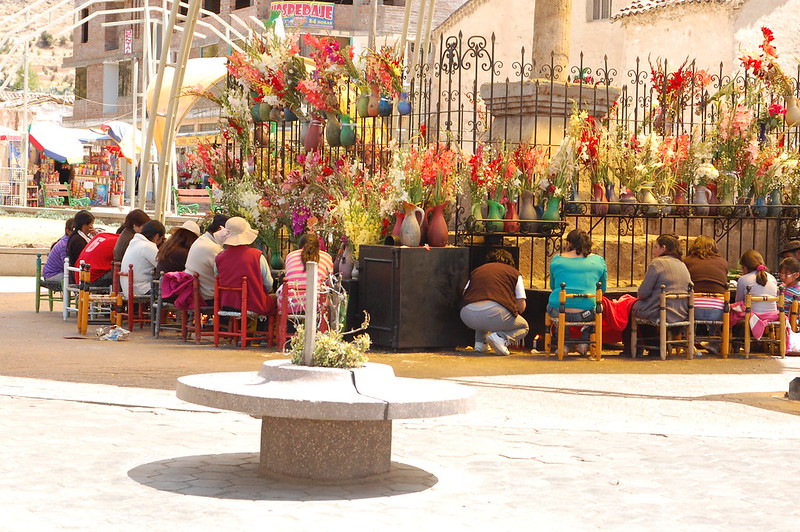 Every single day, the faithful flock to this cross to pray and give offerings of flowers and candles. The effect of all this devotion is that the spot has a very different, peaceful energy that I personally could feel in the air. I can understand why this has become a pilgrimage site of sorts. 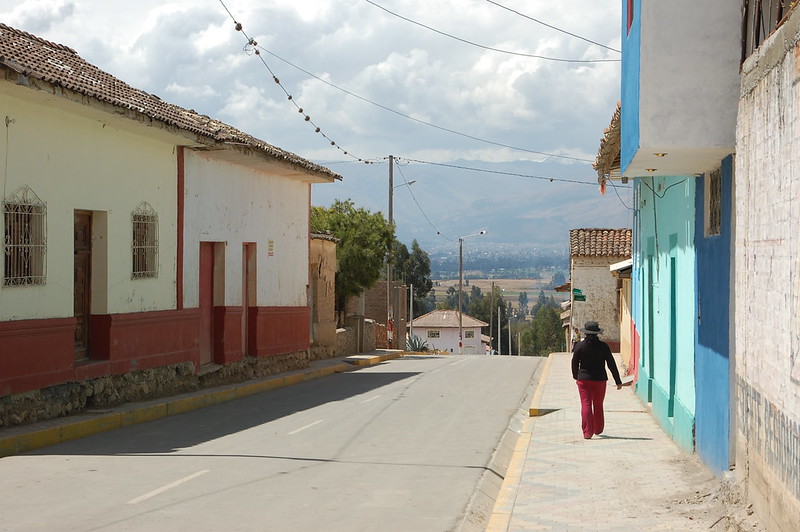 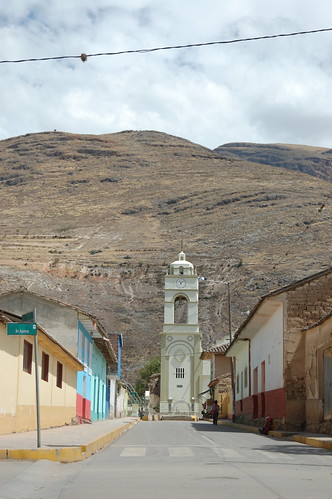 After exploring the plaza I walked down some of the side streets to get a sense of the town. I loved the sense of being surrounded by the hills. Here in Chongos Bajo, I felt like I was in the middle of the Andes, experiencing life as it occurs on a daily basis.

Despite its long history, Chongos Bajo is a well-kept secret in the Junín region. If you want to see what life is really like near Huancayo, it’s only a bus ride away.

It’s towns like these that inspire me throughout my travels, and maybe it’s because I’m from a small town myself. I love beautiful landscapes and fascinating ruins as much as anyone else, but slow travel means getting to spend time exploring places like Chongos Bajo, where centuries-old traditions continue in the middle of the Andes.

(ps…Stay in touch with me and my travels by following blueskylimit on Instagram!)

Recommendations for Huari and Chongos Bajo, near Huancayo, Peru: