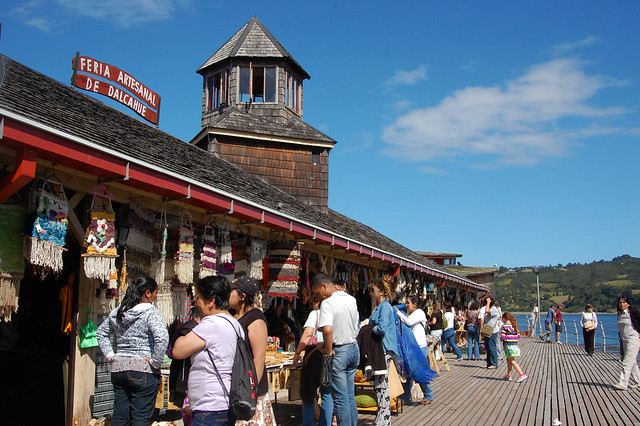 One of the interests that guides my travels throughout South America is my love of textiles and fiber art. Whether it’s knitting, crochet,  weaving, or embroidery, if a region has a specialty, I want to visit that place and learn more about their art. In Peru, this passion brought me to Ayacucho to walk through stalls bursting with beautiful flower embroidery and to Huancavelica to appreciate the multicolored masterpieces (and yes, a few came home with me as well).

After a year in Chile, I knew that sheep’s wool was southern Chile’s specialty. In Santiago, I’d picked up a knitted poncho from Chiloé, so I was looking forward to visiting the island and seeing more of what its artisans had to offer.

That’s what brought me to Dalcahue, a small town located about an hour from Castro, Chiloé’s capital. Dalcahue is known for its large Sunday market filled with stands after stands of woven and wooden goods made by locals, as well as hosting one of Chiloé’s most easily accessible wooden churches. 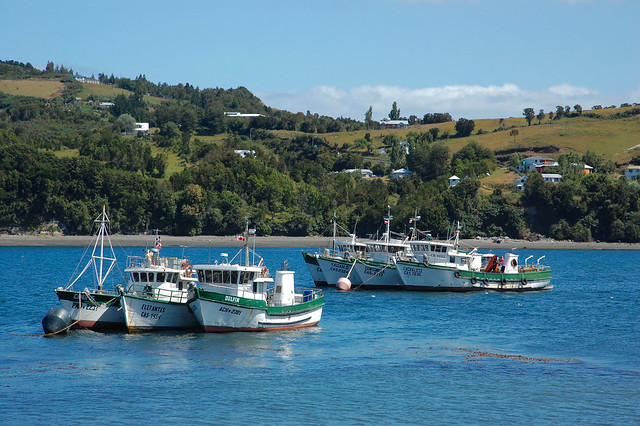 Dalcahue is a small town on the Isla Grande de Chiloé, just across the water from the smaller island of Quinchao, known for the picturesque towns of Curaco de Vélez and Achao. Its privileged location means that it has beautiful views of the water and the green island just a short ferry ride away. 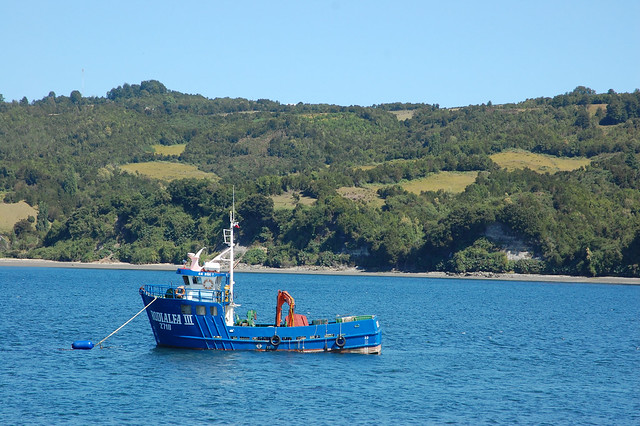 Dalcahue is probably one of the most visited small towns on Chiloé because it is easily accessible on the buses that leave from the municipal terminal in Castro and walkable, with all the main sites within a short distance on pleasant paved roads. If you start early, you can visit Dalcahue and nearby Isla de Quinchao in a day, with plenty of time to get lunch at a local restaurant offering beautiful views over the water. 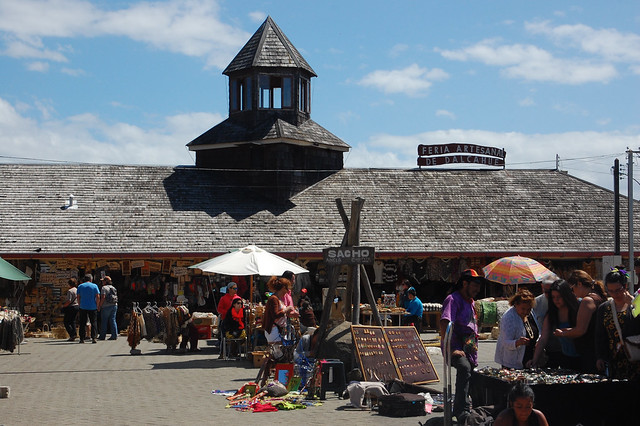 As I mentioned, I headed to Dalcahue because I’d read that the Feria Artesanal was the best and biggest market on the entire island, selling goods from every corner of Chiloé. The market is housed in an open building, with stands selling a variety of textiles, mainly knitted ponchos, hats, and socks, and woven bedspreads, tablerunners, and tapestries. Chiloe’s wool is a thick, coarse sheep’s wool either sold in natural colors or dyed in bright primary colors, giving the textiles a distinctive Chilote style. 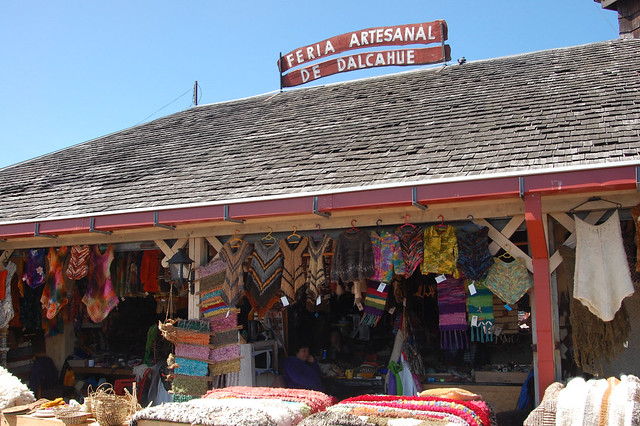 I spent an hour or so wandering the stands at the artisan market, considering a brightly colored blanket, and admiring the cute little souvenirs. Because Chiloé is often very cold, the island’s style is designed for warmth and functionality though there are some artisans making more stylish clothing, ideal for a Santiago winter.

Outside the main building, more informal artisans have set up their booths with jewelry and other interesting wares, and behind the markets there is another building with many small restaurants serving super fresh fish. 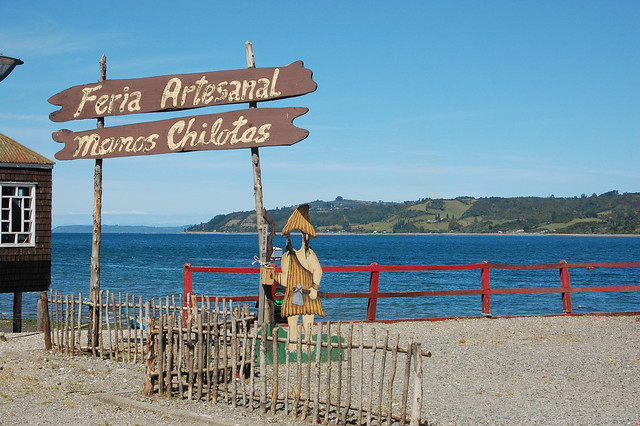 After considering my options at the main artisan market, I wandered towards the church, but then I spotted another small artisan market located right on the water, called Feria Artesanal Manos Chilotas, or the Hands of Chiloé Artisan Market. Intrigued by some gorgeous weavings hanging from one of the booths, I wandered over. 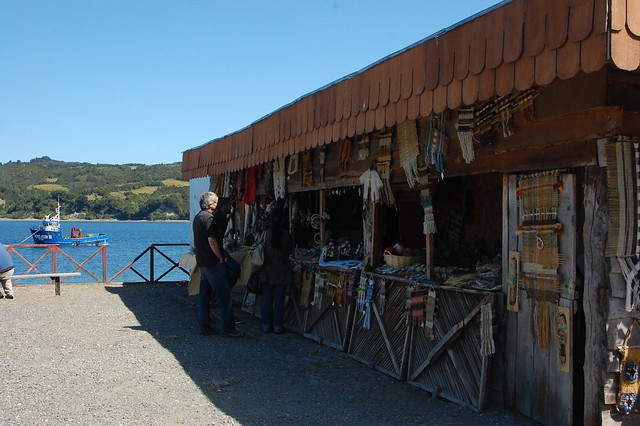 As it turns out, this little artisan market is much more artisanal than its neighbor. These booths are run by the actual artisans, women that create their own designs and have much more refined, creative styles. As they explained, the bigger market has goods that are mass-produced for the commercial market, which was why nothing really got my attention. But this artisan market was filled with unique pieces and I ended up buying a couple of beautiful items.

If you visit Dalcahue, make sure to take your business over to these stands – you’ll find more interesting pieces and support the artisans directly. These women are keeping the traditions of Chiloé alive and infusing them with good taste – and the prices are still reasonable. 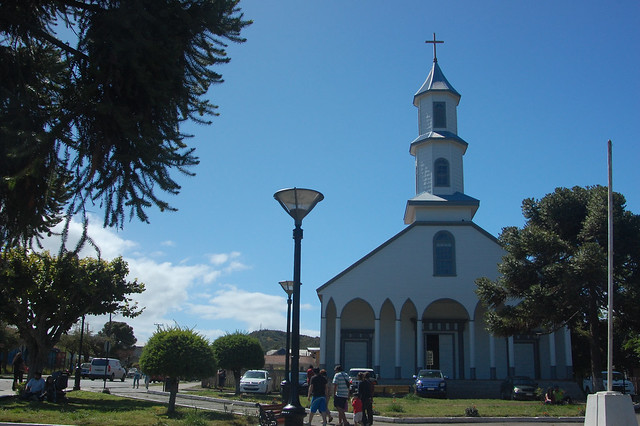 From there, I headed over to Dalcahue’s small plaza in order to see the heart of the town and especially its church, the Iglesia de Nuestra Señora de los Dolores. 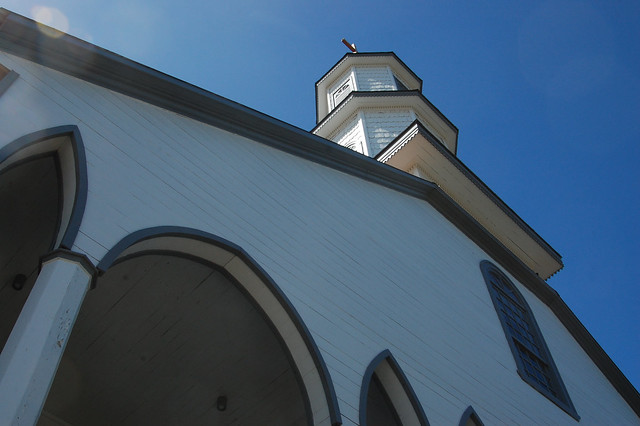 Dalcahue’s church is one of the 16 wooden churches now on UNESCO’s World Heritage List, although there are many more than that on Chiloé. After checking out the Visitor’s Center and museum explaining the construction of these churches back in Ancud, I was curious to explore one for myself. 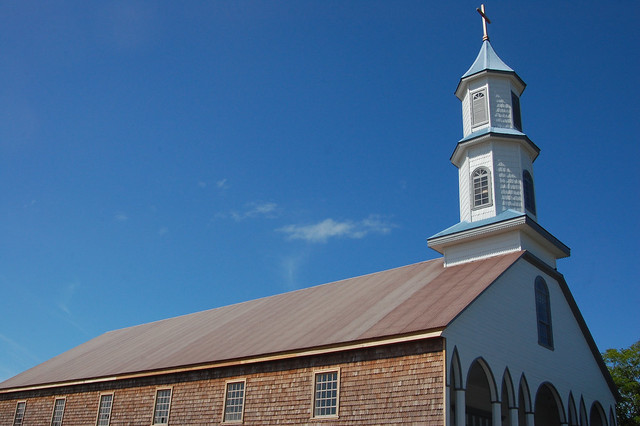 Iglesia de Nuestra Señor de los Dolores is appealing because of its muted colors and traditional wooden construction. You can see the ship-building techniques and the wooden shingles characteristic of the Chilote construction methods a century ago. 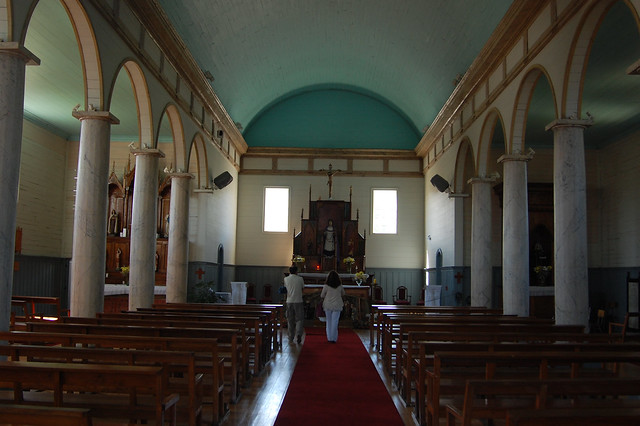 Although I’d been able to appreciate the attractive exterior of the church in Castro, I had yet to see inside one of Chiloé’s churches, so I definitely wanted to do so in Dalcahue. Entry is by donation, just S500 CLP (less than $1) to support the conservation of this historical buildings. 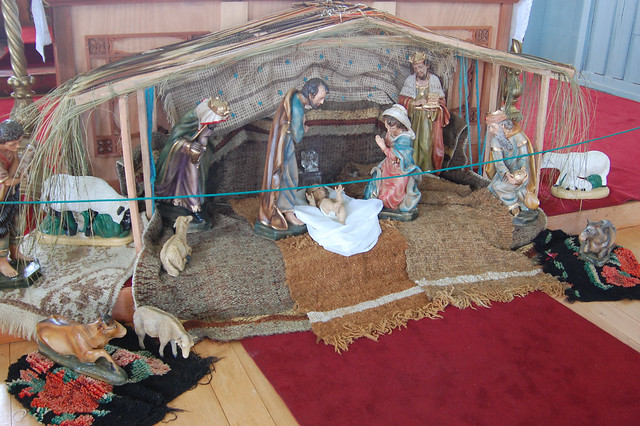 Since it was just after Christmas, the church still had a little manger up which displayed small figurines resting on tiny weavings in the Chiloé-style. Adorable! 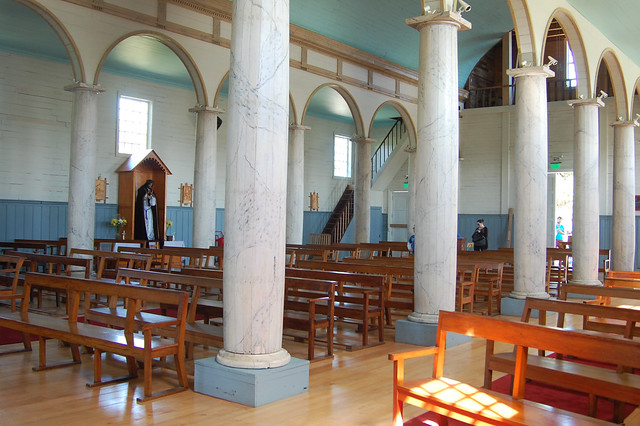 I appreciated the calming, subtle colors of the church’s interior and the solid construction of its supports, all made from wooden. Definitely a change from the stone cathedrals around the rest of South America, left over from the Spanish colonies centuries ago. 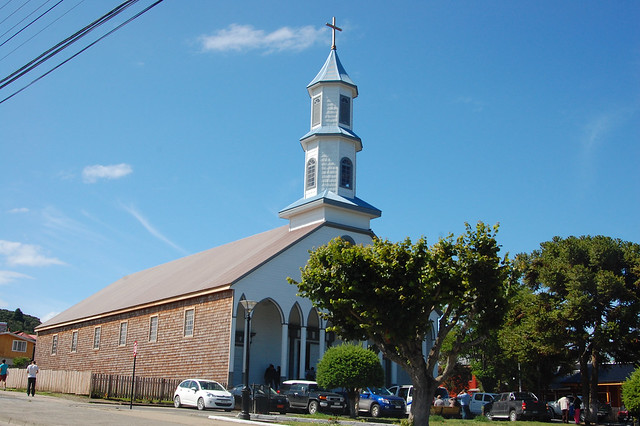 It was surprisingly challenging to find a good angle to take in the entire church as it is located right on the main plaza with a tiny parking lot out front. You can see from photos of other churches on the island of Chiloé that these churches were functional and integrated into daily life of the townspeople, giving a sense of Chiloé’s down-to-earth culture. 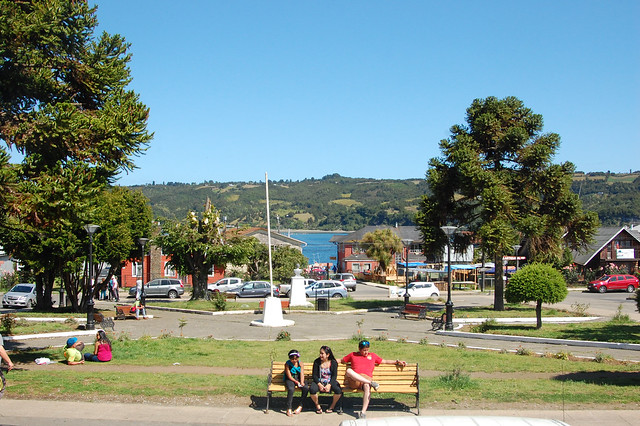 After checking out the church, I headed back through the plaza to the waterfront to look at the stores lining Pedro Montt. Although it’s not pictured, there is a cute little café on this street called Casita de Piedra. The café is upstairs and has big windows with views over the water, and the entry-level of the little house has a gallery with carefully curated artwork and textiles from Chiloé. 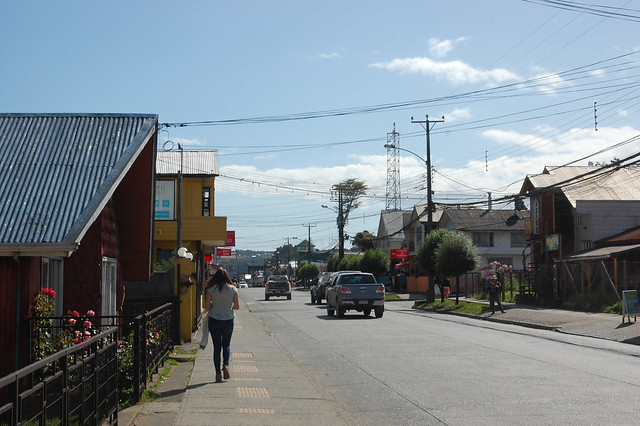 Besides that, there’s not much else to do in Dalcahue, besides appreciate its laidback, residential atmosphere. Buses regularly run along Freire, the main commercial street, making it easy to head back to Castro whenever your wanderings come to an end.

As you can see, Dalcahue is worth an afternoon’s exploration, especially on Sunday when its artisan market is in full swing. I felt like visiting Dalcahue gave me another perspective on Chiloé outside of its main cities. If I’d had more time, I would have liked to pop over to the Isla de Quinchao for the more rural perspective, but in the end I decided that I was more interested in getting over to Chiloé’s national park the next day.