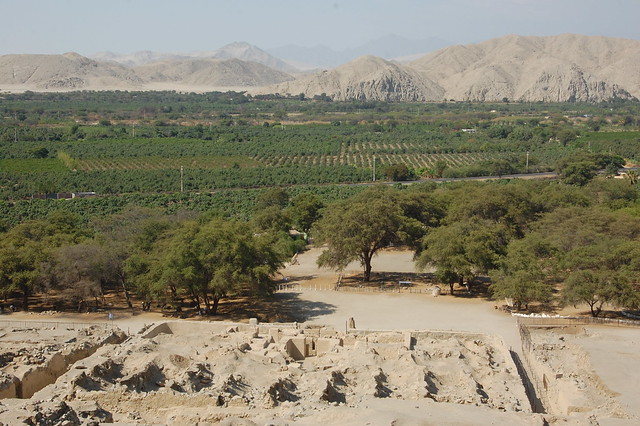 When I decided to spend a couple of weeks in Lima before moving to Chile, I knew I wanted to take advantage of my completely open schedule and sneak up the coast to Casma. I had read about the ruins at Sechín in Hugh Thomson’s fascinating book, A Sacred Landscape, and was curious about the gruesome carvings depicting beheadings, sacrifices, and soldiers. I hadn’t managed to make it there in 2013 so didn’t want to miss this opportunity to get back into the travel mode. I’d also heard that the nearby beach of Tortugas is one of the most beautiful in Peru, and decided to kill two birds with one stone.

Casma is located about five hours north of Lima in the province of Ancash, but it can take some work to find a bus company that actually stops in Casma rather than continuing up the coast to Trujillo or inland to Huaraz. Alternatively, there are combis that hit the major towns on the coast and you should be able to find one that heads to Casma by stopping in one of the transit towns like Supe or Barranca. (More travel information in my recommendations, below.) The ride up the Panamericana passes the entrance to Caral, and the scenery is consistent with the northern coast; the sea to one side, sandy desert hills to the other. 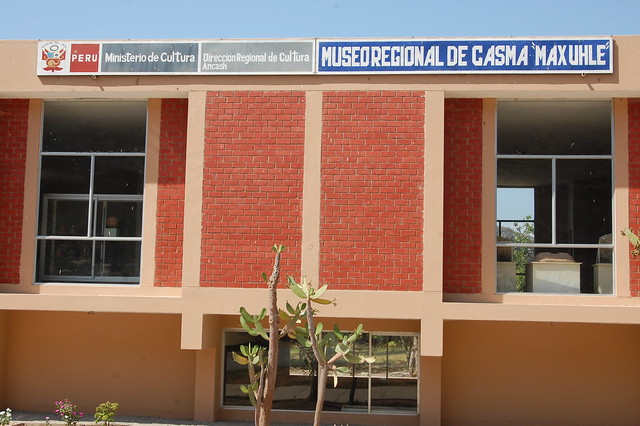 Museum at the Ruins of Sechín, Ancash, Peru

It’s worth mentioning that there are three archeological sites in the area: Cerro Sechín, which is commonly referred to as as Sechín, as well as Sechín Alto and Sechín Bajo, which are being studied but are not easily visited by casual tourists.  There is also the Río Sechín, so it may help to specify “El Templo” (the Temple) or “El Museo” (the Museum) when discussing your destination. 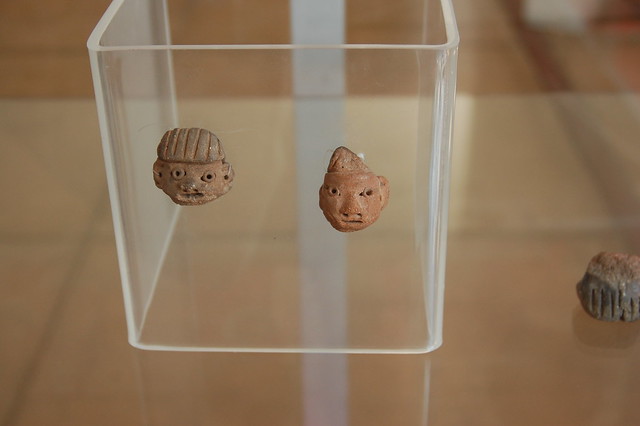 Archeological Relics in the Museum at Sechín, Ancash, Peru

The archeological site of Cerro Sechín is located about 6 kilometers from Casma, and the easiest way to get there is to find a mototaxi willing to take you out to the site. At the site, the friendly guards directed us to the museum, where we paid our entrance fee and toured the sparse museum containing relics gathered from the major sites located in the area. 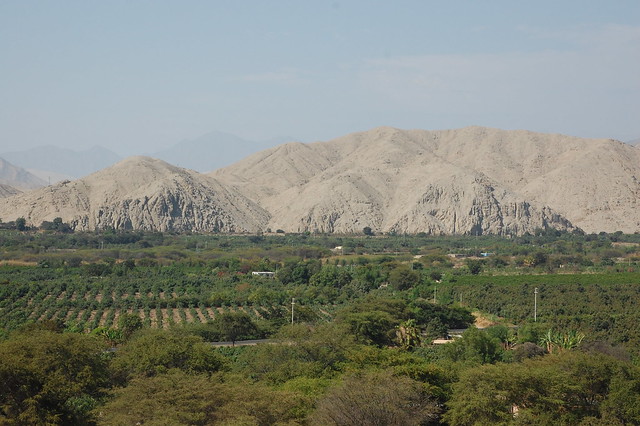 Landscape Around the Ruins of Sechín, Ancash, Peru

From there, we walked over to the small set of ruins, following a well constructed pathway which provides great views of the surrounding landscape. As in Trujillo and Chiclayo to the north, there are broad fields of green trees and patches of empty brown desert mountains. Taking in the scenery, I was reminded of how much I love northern Peru. 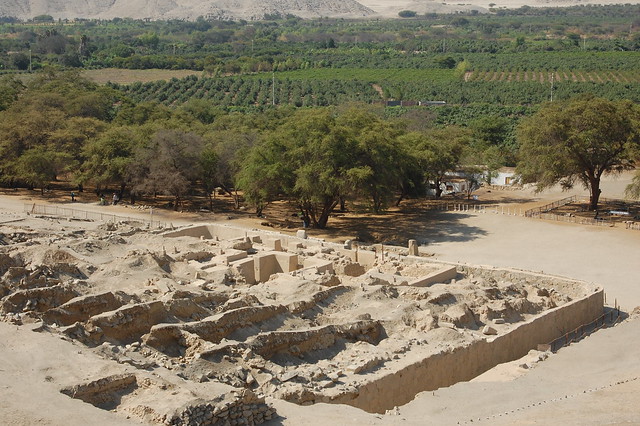 The site of Sechín itself is very small and still under investigation. My friend Enzo and I were the only ones touring the ruins in the late afternoon sun, though we could observe a number of workers going about their daily routines below. 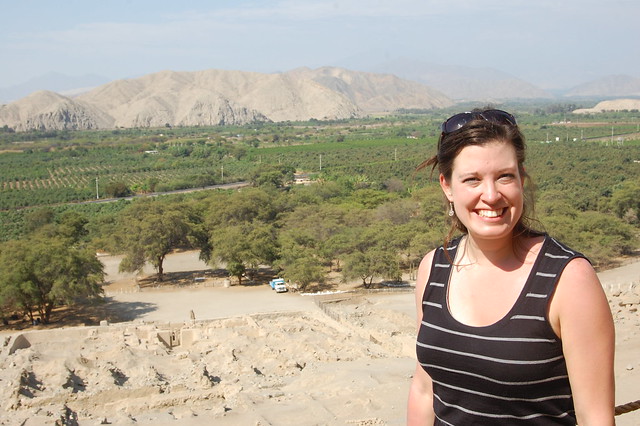 Posing at the Viewpoint above Sechín, Ancash, Peru

Although it’s challenging to make out to the untrained eye, archeologists have determined that the site has one main building, surrounded by stones, and filled in the center with adobe structures. 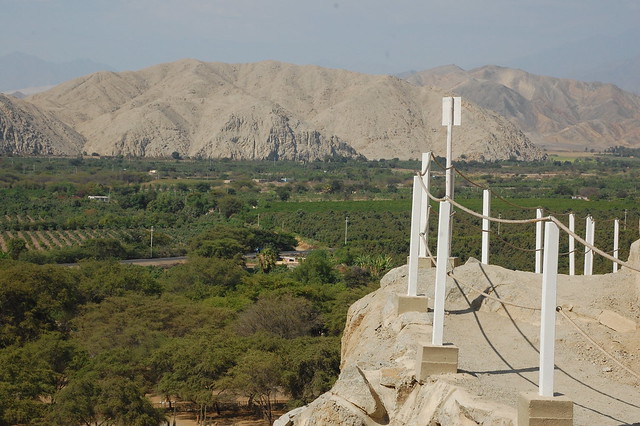 Pathway At Cerro Sechín and Its Views

The hill above the site once had other residential or administrative buildings, which have been destroyed by heavy rains over the centuries. 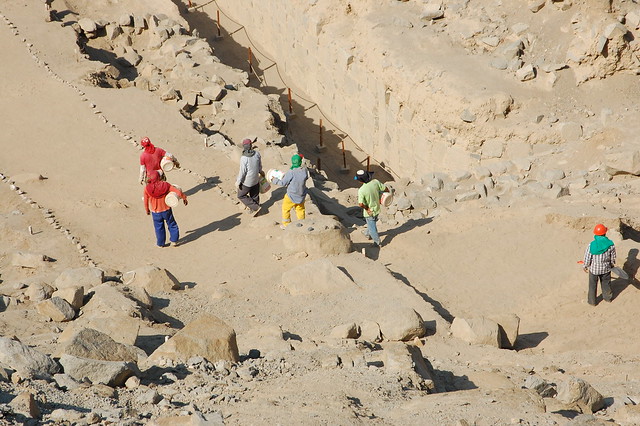 Workers Finishing Up for the Day at the Ruins of Sechín

After completing our circuit around and above the ruins, we descended to get up close to the elaborate carvings depicting intriguing ancient ceremonies. 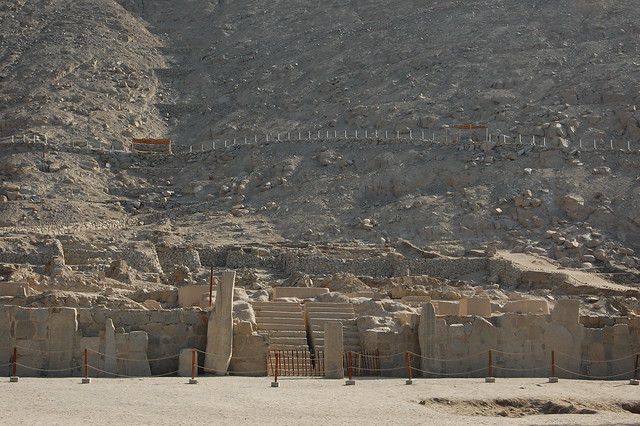 Carvings at Cerro Sechín Leading to the Entrance to the Temple

The images that line the entrance to the temple represent human figures, most likely warriors or perhaps priests, involved in what appears to be a fierce battle. None of the figures represent gods or other mythical creatures: just humans. 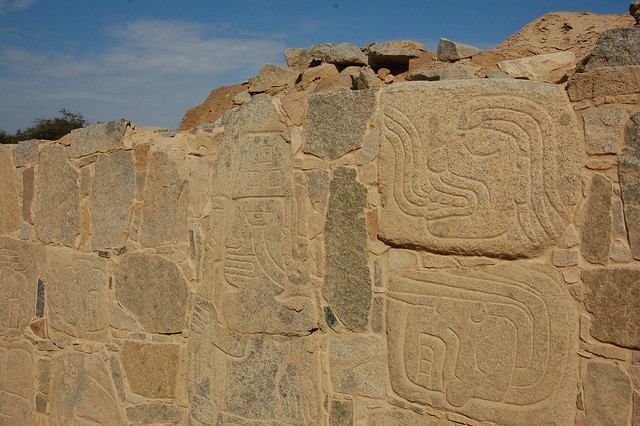 While some of the figures possess their entire bodies, there are also many disembodied heads and all kinds of body parts, leading many researchers to suggest that these carvings describe human sacrifice. Other ideas are that they record violent combats experienced by the Sechín culture, or even that all these different images of various appendages could represent a medical encyclopedia. 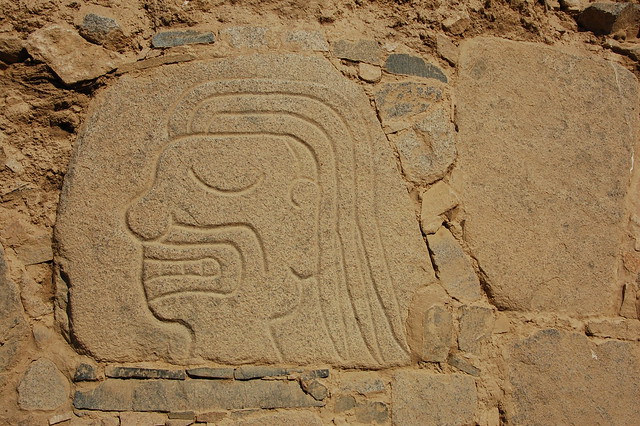 Whatever the story, the figures show gritted teeth and swollen eyes, what appears to be blood or energy flowing out of their heads, grimaces and signs of suffering. 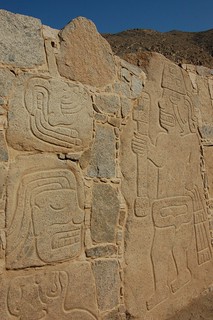 In these photos, you can see some of the body parts, some of the complete figures carrying what appears to be weapons or holy staffs, and examples of the faces both in profile and head on. There are so many images that it’s difficult to really observe all of them, especially in the brutal sun of the northern desert.

These images are located within pathways that appear to continue around the perimeter of the temples, telling stories.  One big question mark for me after my visit is that these walls appear to be reconstructed. 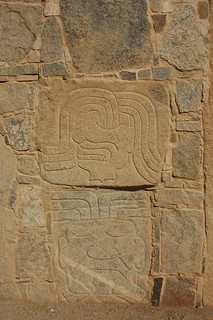 I’m not sure if these monoliths were found standing independently, and then archeologists reinforced the structures with like-colored stones and adobe, or if the walls had crumbled.  I know from my visit to Caral that reconstructing original structures is a painstaking, detail-oriented process, and I learned at Chan Chan in Trujillo that previous preservation attempts actually meant re-carving and replicating the original images, which had deteriorated from the adobe walls after years of rain and wind. 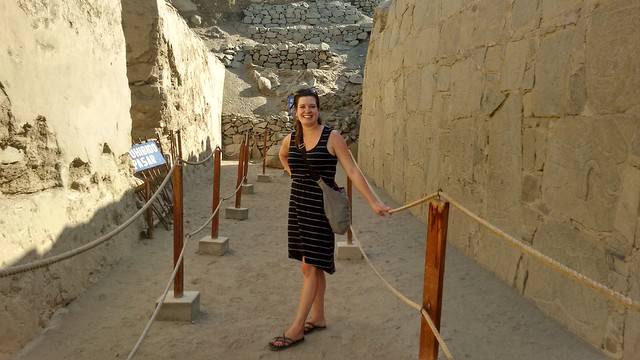 Posing at the Ruins of Cerro Sechín, Ancash, Peru

We wandered through the perimeter pathways, taking in all the different variations on what appeared to be quite a violent theme. I laugh when I see the photos of myself posing there because I appear to be enjoying my visit to what historically was likely a gruesome site.

There is a lot to take in, and I applaud the authorities for making the images accessible to visitors even as they continue to study the ruins and unearth more information about what took place here. 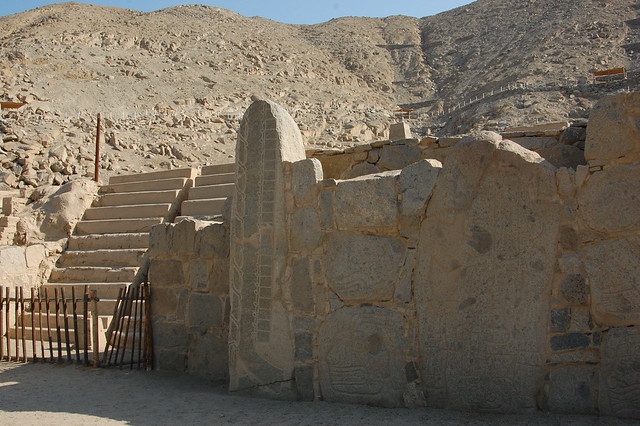 Entrance to the Palace at Cerro Sechín, Ancash, Peru

The visit ends in front of the entrance to the palace, which is off-limits to visitors. According to this fascinating article (in Spanish), the inside of the palace has painted adobe walls displaying images of fish, particularly carnivorous ones, as well as shamans and dead or dying human figures. These images suggest some sort of connection with worship of the sea or concern regarding rainfall in this desert climate. 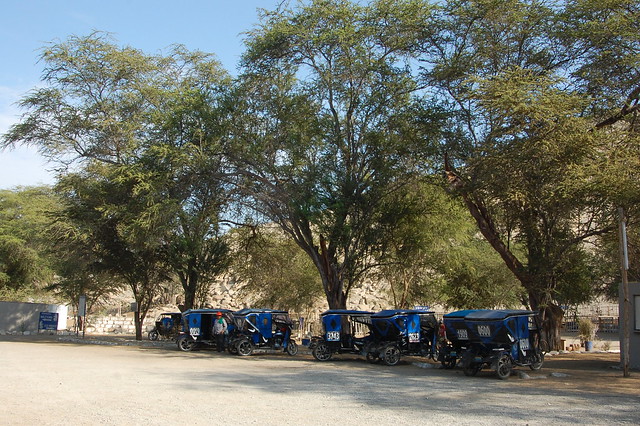 Mototaxis Waiting at the Entrance to Cerro Sechín

In any case, my brief visit left me wanting more information about these ruins and the nearby sites of Sechín Alto and Sechín Bajo. (There are a couple of displays giving basic information about these archeological sites near the small parking lot where these mototaxis were waiting.) While many of the carvings have characteristics in common with the more well-known Chavín culture, represented in great detail at Chavín de Huantar (blog post forthcoming!), it has been determined that Sechín came much earlier. Visiting Sechín helped me place these ruins in my mental timeline of the pre-Incan cultures that once inhabited Peru. 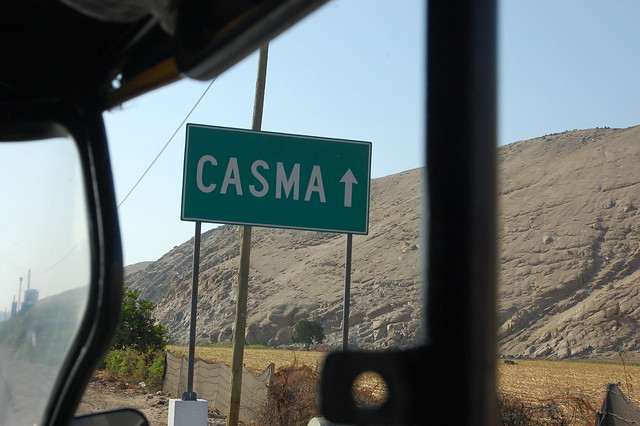 Heading Back to Casma from Cerro Sechín

After finding the last mototaxi not waiting for one of the workers at Sechín, we headed back to Casma, enjoying the wind blowing in our faces as we passed through the agricultural fields along the hills. 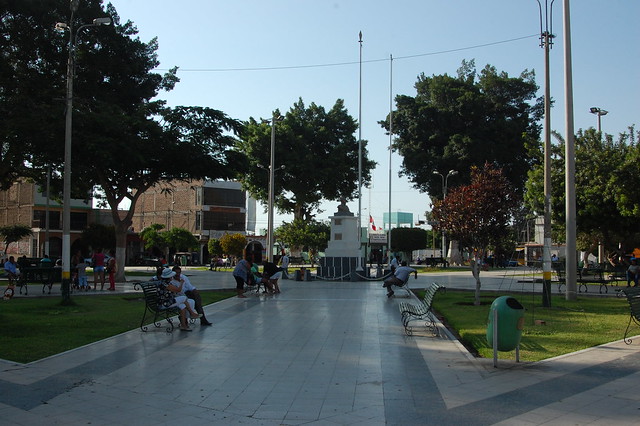 Back in Casma, we took a stroll through the pleasant plaza, grabbed a quick snack, and looked for the combis that would take us to Tortugas, a fishing village known for its beautiful bay. We had finished appreciating on of Peru’s ancient cultures for the day, and it was time to relax by the water.